Why invest in teenage girls?

The economic argument is compelling: adolescence is the moment to secure a triple benefit for society

An advert is running on UK television at the moment, one of a series entitled “This Girl Can”, funded by the National Lottery. The latest instalment shows women of different ages, races, faiths and abilities enjoying themselves doing stereotypically male activities such as boxing and football.

Its message is too obvious for my 14-year-old daughter, who rolls her eyes at yet another adult preaching to her about girls being as good as boys. But she gets the point: she can aspire to anything that boys do — and that aspiration, in itself, is worthwhile.

The bigger question the ad raises in her fiftysomething mother’s brain, is why we still find it necessary to run advertising like this. Why does anyone in 2017, female or male, need to be persuaded to value the contribution that investing in girls delivers?

Sadly, it is clear from measures of global gender equality that considerable persuasion is still needed. The messages are stark. The latest research from the World Economic Forum, for example, finds that, at current rates of improvement, it will take 170 years for the world to reach economic parity between the sexes.

Adolescence is a crucial moment at which to embed messages about empowerment and equality. Sarah Hendriks, director for gender equality at the Bill & Melinda Gates Foundation, describes the years between age 11-19 as the “period when gender disparities become more pronounced”. Adolescence “magnifies the difference between girls and boys,” she says. “It entrenches norms that disproportionately create negative experiences for girls.”

The economic argument for investing in girls should be obvious. The McKinsey Global Institute think-tank estimates that if gender gaps in labour markets were closed fully, as much as $28tn could be added to global annual GDP by 2025. The research suggested that if women participated in the global economy identically to men, there would be a 26 per cent uplift in annual global gross GDP over the next 10 years — effectively adding the combined worth of the US and Chinese economies.

McKinsey’s research, which mapped 15 indicators in 95 countries, measured the distance each country was from gender parity, using a perfect score of 1. It delivered some surprising results: 40 countries had high, or extremely high, levels of gender inequality on at least half the indicators. The regional score was lowest in south Asia, excluding India, and highest in North America and Oceania.

Yet, the problem is not confined to the developing world. Vivian Hunt, managing partner of McKinsey UK, points out that even for western Europe the score was only 0.71. “Even in some of the western economies, where you would expect gender parity to be well accepted, there is still a considerable gap,” she says.

Labour is a clear indicator of inequality. A persistent problem is that the work women do is often undervalued. This kind of discrimination starts early in life. Girls and women do the bulk of unpaid domestic work in the home, whether that be cooking, cleaning or caring for children or the elderly. On a global average, the WEF found, women earn just over half what men do despite working longer hours, once paid and unpaid work is taken into account.

“How unpaid work is distributed varies relatively little across the globe,” says Saadia Zahidi, head of education, gender and work at the WEF in Geneva. “Whether it’s in Scandinavia or India, there’s always unpaid work in the home.” The idea that domestic labour is women’s work in turn contributes to the problem of girls being taken out of education early, hampering their chances of acquiring skills and qualifications.

Child marriage and early pregnancy effectively put a stop to the educational ambitions of teenage girls, especially in countries where abortion is illegal or the stigma of babies born outside marriage or after rape means their mothers are alienated from society. Worldwide, 750m women were married before their 18th birthday, and 15m girls a year are married as child brides, Hendriks says. Reaching girls before they are wed is critical: those who marry before the age of 18 are six times as likely to live in poverty in later life as those who do not.

In thinking about how to respond to this challenge, evidence is key. To help provide this, the Bill & Melinda Gates Foundation announced last year that it would invest $80m to improve reliable data collection on issues affecting women and girls. “We cannot close the gender gap without first closing the data gap,” Melinda Gates said in May last year. “We simply don’t know enough about the barriers holding women and girls back. Nor do we have sufficient information to track progress against the promises made to women and girls.”

One mystery that better data might be able to solve is why, despite the gender gap in education having closed substantially in recent decades, this has not translated into proportionate increases in the number of women in public and private leadership positions.

In terms of access to basic and higher levels of education, the gender gap now stands at 95 girls for every 100 boys globally, up from 92 in 2006, according to WEF. Twenty-five countries have closed the gap entirely, and women make up the majority of students in nearly 100 countries. Even so, the WEF says there is a “marked lack of correlation” between more women receiving an education and their subsequent ability to earn a living in skilled or leadership roles, whether because of social expectations or unconscious bias. There are only four countries (Jamaica, Colombia, Ghana and Barbados) with equal numbers of male and female legislators, senior officials and managers, despite the fact that 95 countries now have as many, if not more, women educated to university level.

There are still many regions of the world where the gender gap in education is far from closed, however. In 2014, Unicef estimated that two-thirds of the world’s illiterate adults were women. Of the 31m girls of primary school age who did not go to school, more than half — about 17m — would never attend school at all. The percentage was even higher in the Arab states and sub-Saharan Africa.

Hendriks says there is a “triple dividend” when an investment is made in a girl, because it positively affects girls’ current and future lives, as well as those of their children, both male and female. According to Unicef, a child born to a mother who can read is 50 per cent more likely to survive past the age of five. If all women in low and lower-middle income countries completed secondary education, Unicef believes that 3m lives of children under five would be saved every year.

While poverty plays a significant role in restricting girls’ rights, institutional and cultural barriers can be just as significant. Getting the message across, then, that “this girl can”, is still important.

Explore the Special Report
READ MOREGirls: The Path to Gender Equality
Nepali women on their period sent out in the cold 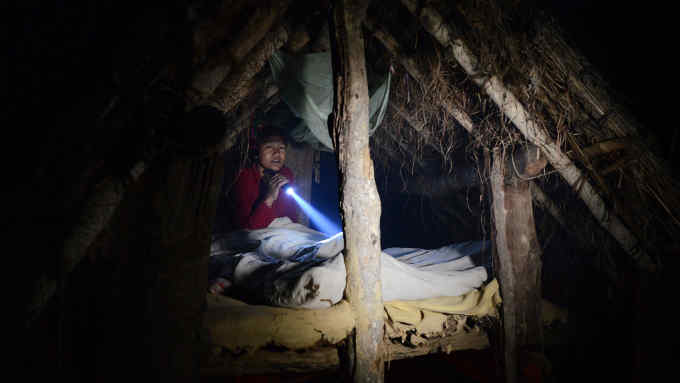