The conversation with Niger’s prime minister and his cabinet started with a data point. In 1960, Kristalina Georgieva’s home country of Bulgaria ranked equal with Kenya in the global population tables, each at about 8m. By 2012, when she was visiting Niger, Kenya’s population had soared to 44m, while Bulgaria’s had fallen to a little over 7m. In that transition, Georgieva says, she saw a worrying precedent for Niger if it didn’t start empowering its women and deploying more effective family planning policies.

“I told them: ‘I cannot imagine my country with 44m people! You cannot go on like this.’ And that — boom! — opened up a conversation I will never forget,” Georgieva recalls. “The prime minister said: ‘Oh, Niger has plenty of land. We can have many more people. This is not a problem.’”

One of the two female ministers at the table then jumped in, Georgieva says, raising her eyebrows in an impression of her astonishment at the time. “She said: ‘Oh come on! We only have desert! What do we have? We have sand. We don’t have land.’ ”

The point that Georgieva is making, when we meet in Washington DC on a late summer morning, is that educating adolescent girls — and avoiding the national economic burdens that come from early marriage and childbirth in the developing world — is vital. In her animated fashion, however, she is also illustrating another of her favourite truths: how important it is to have women at the table in any discussion.

As the World Bank’s de facto number two and a former European commissioner and candidate for UN secretary-general, Georgieva belongs to a select club of women at the top table of global development. After years of working in development and hearing too many male finance ministers and other leaders ignore the plight of adolescent girls, she is eager to redress the balance.

“Having women involved gets us talking about things that men normally avoid talking about”, such as early marriage, she says. The result “is not trivial”, she adds, pointing to a World Bank study that found delaying marriage by even a few years for girls in the developing world would add more than $500bn to annual global economic output by 2030.

Video: Why we should invest in educating girls

“If we are serious about countries succeeding and making the best of their resources, then obviously there is a massive economic and social benefit from empowering women. And empowering women starts when they are girls,” Georgieva says.

Georgieva’s own story is one of overcoming the odds, too. Her chief act of adolescent rebellion, growing up in communist Bulgaria, was to study western philosophers rather than Marx and Engels. But her success, the 64-year-old says, was born out of a family tragedy.

Her father died young, having been in and out of hospital during her teenage years. The family crisis had pushed Georgieva to study hard and get a job selling food in a Sofia market, one of the few places where private enterprise was allowed in the country. Her aim was to become independent so as not to be a burden on her parents. “My grades shot through the roof because I wanted them to have peace of mind,” she says.

“The other thing it taught me was, the tougher life is, the more you smile. Any time I had difficulty in life, that’s how I would react. Panic? Would it help? No — it drove me to mature much faster.”

Today, she draws a connection between widespread institutional failures in educating young girls and what she sees as a demographic crisis unfolding around us. This crisis, she says, together with climate change, is the underlying cause of so much of what ails the developing world, from drought to revolutions to terrorism.

There is a massive economic and social benefit from empowering women

Georgieva describes a band stretching from Africa’s Sahel region (the area of the continent from Mauritania in the west to northern Ethiopia in the east) to Syria and Iraq. Almost all the countries in it, she says, are plagued by an “explosive cocktail” of conflict and natural disasters that is made more toxic by high birth rates, soaring youth unemployment and young populations struggling to find productive paths in life. What they have in common, she says, is that “the population pressures are horrendous”.

Even oft cited development success stories such as Rwanda, she argues, are being held back by their struggles with population growth. While the percentage of people living in poverty in Rwanda has been falling in recent years, the absolute number of poor people in the country has continued to grow.

Worldwide “the numbers are staggering”, Georgieva says. “There will be one billion young people looking for jobs over the next decade and I don’t see 1bn jobs waiting for them.”

She does, however, have cause for hope. A World Bank pilot programme aimed at empowering adolescent girls launched in 2008 in Afghanistan, Haiti, Jordan, Laos, Liberia, Nepal, Rwanda and South Sudan drew just $20m in funding, she says. But at a summit in London this year, countries including Bangladesh, India and the UK as well as major philanthropists promised to increase funding for projects targeting adolescent girls by more than $2.5bn.

In Niger and other countries in the Sahel, the World Bank has deployed some $200m in recent years on projects that concentrate on “all the factors that help bring down population growth”, Georgieva says, from education and family planning to convincing women of the value of marrying later.

She gives examples from all over the world. She cites the story of a young woman in Nepal who, after her husband left her and her child, started a new life on a bank-funded employment programme, on which she learnt to drive. “When her husband found out she had a good job, he put out feelers to see if she wanted to get back together,” Georgieva recounts gleefully. “But she said she was too busy because she wanted to learn to drive a truck.”

Bangladesh, Georgieva points out, has derived its recent relative economic success from a textile industry that relies on legions of young women to compete globally. Educating young women to take those jobs “has created this major economic return”, she says. “People are now studying the story of Bangladesh.”

Georgieva wants the women in her own life to learn these lessons. Besides being one of the world’s most powerful women she is a mother and grandmother to a seven-year-old, who is already being prepared for a life that ranges beyond Bulgaria. “It is fantastic to have a family and a husband,” she says. “But [my granddaughter] has to stand on her own two feet.”

Georgieva is a student of languages and practises her French daily. Her granddaughter has already been enrolled in a German school in Sofia — the assumption is that she will pick up English along the way and grow up to be at least trilingual. “It will become so much easier . . . if you have languages,” she tells her granddaughter. “The world is much bigger than you see today.” 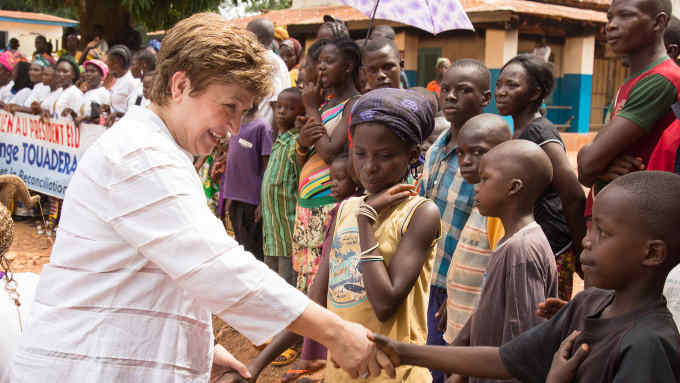