As the authorities attempt to break the cycle of abuse, victims are finding the courage to speak out

Dalia* enters the room full of women with her head lowered and a forced smile. The 15-year-old’s headscarf falls around her broad shoulders as she sits on the floral couch. Dalia’s mother, Heba, hands her a baby and Dalia begins to nurse her.

Heba, Dalia and her baby are three generations of one Syrian refugee family living in Ankara. Last year, Dalia’s parents married her to Ahmed, the 26-year-old son of a family friend, and she became pregnant one week into her marriage. Her relatives had explained sex to her but not birth control, she says.

Ahmed turned out to be a criminal and a womaniser who shut Dalia in the house and forbade her to see or talk to other people for days at a time. When she told her parents the truth they brought her home and Dalia gave birth to her baby this summer. “I thought having a baby would make things better, but it didn’t,” Dalia says, tangling the ends of her headscarf around her fingers. “I’m not a child any more. I’m a divorced woman who has to take care of her child and protect her.”

Dalia’s story is a common one in her hillside community. Many refugee families live in the neighbourhood of Altindag. Along the tree-lined, unpaved alleyways the sweet smell of cardamom in coffee mixes with the stench of sewage. Rusted doors creak in the dilapidated houses as men emerge to loiter in the 35-degree heat. Less visible are teenage girls like Dalia, who tend to be thought of as precious vessels of the family honour, all too easily broken.

Aid agencies know that refugee girls face a high risk of being trafficked and sexually assaulted as they flee war zones. But once they are safe from the bombs and bullets, the hardships of life in exile can push girls into child labour or early marriage. There are countless stories of fearful parents marrying off daughters in their early teens once they reach their host countries.

These families don’t want responsibility for their daughters. They just want food on the table

Nur Burhan, a Syrian gender researcher with the Center for Civil Society and Democracy in Gaziantep, Anatolia, some 50km from the Syrian border, says a combination of displacement, poverty and cultural attitudes makes early marriage more likely. In refugee homes, marrying a girl can secure her future, bring in a dowry and mean one less mouth to feed. “These families don’t want the responsibility of their daughters any more. They’re just thinking of putting food on the table,” Burhan says. But there is also a long-held belief that early marriage will keep daughters safe from the threat of sexual violence — and their reputations intact.

The problem is particularly acute in Turkey. The Nato country is now home to about 3m Syrians, who make up the largest refugee population in the world. Turkey’s laws are secular — even while the government is becoming increasingly religious and conservative — and based on the modernist principles of its founder Mustafa Kemal Ataturk. Couples must be 18 to marry without parental permission, polygamy is outlawed and every Turkish child is required to attend school. If a man over the age of 18 marries a child, he can be jailed for statutory rape; her parents might also face a prison sentence.

A deal struck last year between the EU and Turkey has made it easier for refugee children to enrol in Turkish schools and have access to free healthcare and birth control. Still, only about 40 per cent of Syrian children attend school. About 243,000 Syrian refugee girls are enrolled in temporary education centres and Turkish public schools, but enrolment drops significantly after the eighth grade for both girls and boys, says Sema Hosta, a spokeswoman for Unicef in Turkey. Many work on farms with their families, as street vendors, or in factories.

Turks, too, break laws designed to protect adolescent girls. There are reports that migrant workers and Turkish landlords have sexually abused girls on farms, says Rada Omrain, a project manager with Watan, a non-governmental organisation that works with Syrian refugees. Watan helps victims of child labour and gender-based violence, offering families subsidies for their rent — the biggest expense for refugees in Turkey — in exchange for a promise that they will send their children to school.

Turks’ traditions are not much different to those of their Syrian neighbours, especially in the rural parts of the country. Turkish men illegally marry Syrian child brides as second wives, who have no rights under Turkish law: no child support, alimony or inheritance if they divorce, Burhan says. Even before the influx of Syrians, one-third of marriages in Turkey involved child brides.

The Turkish government and multiple NGOs have launched programmes to educate and teach families about the dangers of child marriage and the importance of birth control, to avoid the early pregnancies that can cause health problems in young girls, even death. But the response, especially from men in the community, has been negative, says Rahaf Khouja, a caseworker with Watan. “We had workshops for men and women but the men weren’t interested,” says Khouja, a Syrian with strawberry-coloured hair who works in the Ankara Syrian community. “The men think they can get away with these crimes because their women will be too ashamed to report them.”

Bina D’Costa, head of migration research and evaluation at Unicef’s Office of Research Innocenti in Florence, says solutions that involve families will take time. “Advocacy campaigns on reproductive rights and early marriage need to take into account the fact that these family decisions are sometimes perceived as sacred — beyond the realm of government and NGO functions,” she says.

The women in Dalia’s family say that Turkey’s more open social fabric and legal system has given them the leverage they needed to leave abusive marriages that would have been difficult in Syria. Education and awareness-building are crucial. Khouja says that, increasingly, girls and women are not ashamed to speak out. Once they know their rights, they are more likely to report abuse to the Turkish police. “Women are freeing themselves from the stigma and speaking up,” she says.

Domestic violence is another serious problem. According to some surveys, three out of 10 Turkish women suffer physical abuse in the home and at least 414 girls and women died from domestic abuse in 2015 and 2016 in Turkey, according to We Will Stop Femicide, a Turkish women’s group.

Syrian women believe that domestic violence has increased in their communities because their men have lost their status, incomes and dignity as refugees. Khouja has worked with hundreds of people in refugee families in Ankara, doing surveys and delicately asking questions about domestic violence. She knows Altindag well and takes me to the home of a refugee family, where she first went to offer health services to the disabled father. While there, she met their daughter Leila, who was pregnant and hadn’t been to see a doctor once. Leila told Khouja she was afraid to go because her husband might kill her. With a little more prodding, Khouja discovered Leila had been married at 17 to a Syrian man who was abusive.

He beat Leila regularly, but the only time she ended up in hospital was when her injuries couldn’t be treated at home. Leila’s disabled father and her mother, Sana, a respected matriarch in the family, finally demanded a divorce for their daughter. However, few such divorces are official, since the marriages are performed in private by clerics and hold no legitimacy in Turkish courts.

We meet Sana at home. As she begins to talk, some neighbours poke their heads round the sheer curtain hanging in the doorway. It’s Heba and her sister Najla. Sana stops talking, but Heba says if we want to hear stories of domestic violence and early marriage, her family and, in fact, the neighbourhood could tell us volumes. She brings us to meet Dalia.

Heba says she and her husband, Hisham, often blame themselves for what happened to their daughter, but that it must have been her nasib, an Arabic word meaning destiny. “I never imagined my daughter would be a divorcee at 15,” Heba says.

The family fled their home in Aleppo three years ago with their four children, of whom Dalia is the eldest, as the civil war raged. To escape the shelling, the family first moved to Suran, a village 100km south of Aleppo, but Isis seized the area shortly afterwards and, after Hisham saw the Islamist extremists beheading local Syrians, the family left again and walked across the border to Turkey with the help of human traffickers.

Dalia, who speaks both Arabic and Turkish and serves as the family’s translator, says she has few memories of a childhood without war. She finished third grade at school in Syria but never enrolled in Turkey because the family didn’t have the right paperwork. They lived upstairs from a Turkish Roma family and when Dalia was 13 the neighbour’s boy, who was 16, fell in love with her and his parents asked for her hand in marriage.

Dalia’s grandfather had a Syrian friend who also wanted her hand in marriage for his son Ahmed. Under pressure from both sides, Heba and Hisham accepted Ahmed’s proposal and, after only six days, the couple were married in the presence of a Muslim cleric.

Heba plays a video of Dalia on her phone in her white dress happily dancing with Ahmed in their home as female relatives ululate in the background. “I wanted the marriage. I was excited,” Dalia says.

Khouja says many child brides are not forced but persuaded to marry. Some look forward to a wedding and the finery that comes with it. “It’s like they’re playing a fairy princess game with a prince. They have no idea what the results will be.”

To Dalia, Ahmed remained a prince for four months. He rented an apartment for the two of them, showing affection and buying her gifts. Then he began to disappear for nights at a time with other women. He demeaned her, calling her fat and stupid. One night, she found stolen mobile phones and what appeared to be illegal drugs in their home. As her belly grew, she spent her days cooking and cleaning alone because Ahmed would not allow her out. “He only brought food home. I didn’t have any money,” she says.

Finally, during the Eid holiday in June, Dalia broke down and told her aunt Najla about her ordeal. Najla, herself a victim of assault and abuse by her husband for 12 years, stood up for her niece. When Heba found out, she too was determined to rescue Dalia. “I stood up to my father and whoever else objected to the divorce,” Heba says. “I may not have been able to do that in Syria.” The cycle of abuse has to end, the women say, and it is their solidarity that is slowly changing things.

Ahmed is now laying claim to Dalia’s baby, whom he hasn’t yet seen. Turkish law usually allows mothers and their families to keep children of broken marriages. But it is likely that Dalia will face more obstacles if she has to fight for custody. “I hope I never see him again and that my baby stays with me. I’m not afraid any more,” Dalia says, looking towards her mother and aunt. 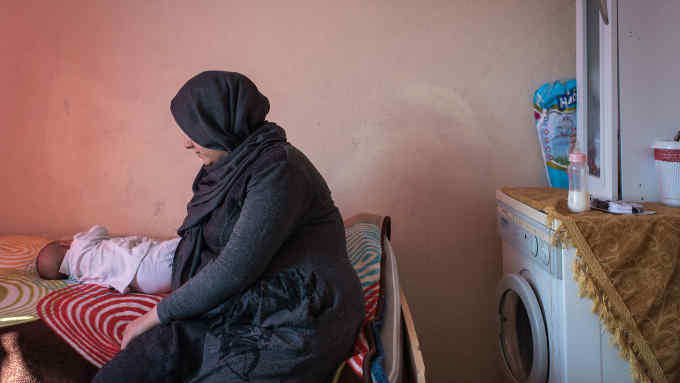