The implications of a skewed sex ratio for women’s health, as well as the national economy and security, are profound

When “Ovsanna”, who lives with her two daughters in Gandzak, a village in eastern Armenia, became pregnant for the third time, she consulted a local elder, who looked at the shape of her belly and predicted she would have another girl. She had no hesitation about what to do next. After paying for an ultrasound to confirm the suspicion, she decided to have an abortion. It was not the first time — she had already undergone several surgical abortions in her desire to give birth to a son.

She does not want to be photographed or identified by her real name for fear of social stigma and getting into trouble with the authorities. But she makes no secret of her views: “I prefer boys. The opportunities for women are very limited. Our community loves boys more. They continue the blood line. They keep the hearth burning.”

Her story reflects a widespread pattern in Armenia — a combination of entrenched traditions, the Soviet legacy and modern technology. The result is a significant sex imbalance in the country’s newborns that has consequences not only for women’s health but for the broader future of the country. Efforts to stop sex-selective abortions are being aimed at the next generation of teenage girls, before they can become mothers themselves.

An uneven gender balance has long been observed in parts of Asia, particularly China, India and South Korea. In those countries it is usually a result of the higher cost of bringing up girls — expensive dowries must be found in order to marry them or else they remain dependent on the family. In recent years, however, demographers have been struck by the emergence of a similarly skewed pattern in the Caucasus and the Balkans.

Without any human interference, about 103-106 boys are born for every 100 girls worldwide — nature’s way of compensating for the greater likelihood of males dying in infancy. Yet in societies with “son preference”, that ratio widens significantly. Early this decade in China, the figure reached 116 boys for every 100 girls. Azerbaijan and Armenia followed closely behind.

In the early 2000s, Armenia’s sex ratio rose as high as 120/100 and for couples who had already had three daughters, the ratio for a fourth child reached 177 boys for every 100 girls. In the Gegharkunik region, where Gandzak is located, the number of boys peaked at above 200 for a fourth child.

“Everybody wants a boy,” says Ruzanna Tsaturyan, an ethnographer at Armenia’s National Academy of Sciences, who has studied gender imbalance in communities. “Mothers in their heart may prefer a girl” but, she says, they realise that a boy is guaranteed a better future.

As in other countries with a lower proportion of female births, Armenians believe sons will preserve the bloodline and the family name. The youngest boy also typically inherits any family land and property, and is responsible for looking after his parents when they are old. Girls, by contrast, tend to leave their families when they marry, to join the households of their husband and in-laws, a custom also practised in south Asia.

A woman’s lowly status is reflected in the details of everyday life. Even the Armenian word for “boy” can be used to mean good luck or success. Parents of newborn girls tell stories of relatives and medical staff who console them with the phrase “Never mind, the next one will be a boy”.

Traditional practices to help women conceive boys include “counting” the optimal days on which to have intercourse, and lying on the left side after sex. There is extensive folklore around how to identify the gender of an unborn baby, from reading coffee grounds to the claim that if the woman looks more beautiful during pregnancy, she must be expecting a boy. Then there are the darker customs that relate to methods of aborting female babies at home, including jumping from a height or drinking vodka mixed with pepper or chilli.

Our community loves boys more. They continue the blood line. They keep the hearth burning

The problem is relatively new. In the past, the easiest way for a couple to make sure they had a son was simply to keep having babies until a male heir arrived. Armenia had one of the highest fertility rates in the Soviet Union, with an average of more than four children per mother in the 1960s.

That attitude changed in the late 20th century, however, as the Soviet Union fell apart. Armenia went through particular hardship after a devastating earthquake in 1988 that coincided with the start of its conflict with Azerbaijan over the disputed territory of Nagorno-Karabakh and an economic implosion as communism collapsed. With life a daily struggle, the fertility rate fell from 2.6 children per mother in 1990 to 1.2 in 2002. Suddenly, the sex of the firstborn child mattered far more. Meanwhile, the new availability of ultrasound equipment meant that the sex of an unborn baby could be detected more reliably.

Abortion offered a quick remedy if the ultrasound’s prognosis was a girl. The Soviet Union had become the first country in the world to make the procedure legal in 1920, and it became the family planning method of choice. While the Armenian Orthodox Church opposes the practice, its influence is muted — a legacy of repression of religion and tight control by the authorities under communism. Despite the risks to health and fertility, abortion rates were extremely high.

In the early 1990s, Amartya Sen, the Indian economist, raised concerns over “missing women”, most notably in Asia. Debates continue in India and China about the fallout of a skewed sex ratio, such as a rise in violence, bride kidnapping, sex slavery and increased social tension as an excess of young men struggle to find wives.

Yet in Armenia and its post-Soviet neighbours, Orthodox Christian Georgia and Muslim Azerbaijan, both the realisation of the existence of the problem and the response to it have been far slower. One reason is that many of the consequences are yet to be felt. The first generation to be significantly affected — in the early 1990s — is only now reaching marriageable age.

Meanwhile, other factors have reduced, or even reversed, the sex ratio imbalance for those beyond their teenage years. Continued bleak economic prospects have triggered the large-scale emigration of Armenian men, with most émigrés moving to Russia in search of work. Other young men have fled the country to avoid conscription.

“In the beginning everyone said it was a non-existent problem,” says Garik Hayrapetyan, assistant representative of UNFPA, the UN population fund, in Armenia. But he has been determined to act. He has commissioned detailed research and talked publicly about the problem, giving more than 100 interviews a year to local journalists to raise awareness.

One argument that seems to carry weight with Armenians is the effect a skewed gender ratio might have on national defence. In a country that has lived with invasions and conflict — from the genocide of 1915 to the fighting in Nagorno-Karabakh that has continued since 1988 — the threat to the supply of soldiers is an important consideration. “Fewer girls means fewer boys, and a priority issue is security,” says Vahan Asatryan, from the International Center for Human Development, a think-tank in Yerevan, Armenia’s capital. “If you want soldiers, you need mothers.”

There is also the general demographic problem, he says. A deficit of 35,000 so-called “missing mothers” since 1990, in turn, means the birth rate will continue to fall. “Armenia is a small country. If you want to keep it sustainable, the argument for reducing sex selection is compelling.”

There have been efforts to counter sex selection. The problem has been highlighted by the Council of Europe and the EU, which has provided funding to develop training and awareness programmes across the region, with a special focus on Armenia.

In 2016, the Armenian parliament passed a law that effectively outlaws sex-selective abortion. The authorities have also tightened access to misoprostol, a commonly used abortion drug, making it only available on prescription.

Emigration is also forcing families to change their practices and their views towards women. With a million men having left Armenia since 1990, women are taking on roles Armenians traditionally associate with men, such as looking after their elderly parents. “I just saw a woman whose sons came back to organise their father’s funeral,” says Elmira Martirosyan, a doctor in Lusarat, a village near Yerevan. “But they now live in Warsaw and it is the daughter who has moved back to look after the mother.”

This seems to be having an effect. Recent data show the imbalance in newborns in the first half of 2017 fell sharply to 111 boys for every 100 girls. Yet attitudes surrounding the greater preference for boys have not changed, so far. There is a risk of sliding back to the bad old days and modern medical techniques such as in vitro fertilisation could open up new ways to enable sex selection.

In surveys, Armenian women consistently express a much weaker preference than men for having sons. In villages with high rates of emigration, some wives say they want to have boys to ensure that their husbands will return home. Others describe being threatened with divorce unless they seek to have abortions if they are expecting a daughter.

In a hotel in Gyumri, a town in the north of Armenia, a group of 20 young people is attending a course designed to tackle gender prejudice, organised by World Vision, the children’s charity. Mariam Grigoryan, a social worker who runs the programme, says: “The men say they want a daughter, but first they want a son.” She has started to see some shift in attitudes, however, including remorse on the part of one young couple who had already aborted a daughter.

“Equality does not exist here,” says Emma Mkrtchyan, a course participant. “Sex-selective abortion is a huge issue. We understand that, but the main problem is that most people who believe in it do not even want to come here and discuss it.”

Tsaturyan, the ethnographer, winces even at the use of the phrase “missing mothers”, with its focus on such a reductive role for women. “We need a shift in discussion on men’s responsibilities,” she says. “The big factors stopping us from having a brighter future are emigration, war and poverty. We are not targeting the real reasons.” 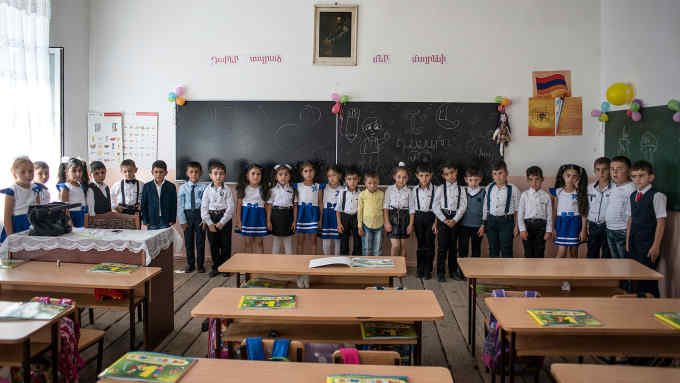