Why the soft machine will dominate urban transport

Pedal power to take more goods to the customer, people to work and kids to the nursery

It is the technology that is changing the face of the school drop-off. At many London primary schools, alongside the children arriving in cars, on bikes and by scooter, a growing number are arriving strapped into the boxes of cargo bikes — high-capacity, load-carrying bikes or tricycles that are also an increasingly popular, environmentally friendly and efficient means of delivering goods.

The rise of this apparently old-fashioned technology suggests to many observers that, despite the widespread excitement about the prospects for self-driving cars and air taxis, the future of mobility in old and crowded cities is likely to be powered by human muscle.

The cargo bikes — which often resemble overgrown versions of the traditional tradesperson’s delivery bike — are only one manifestation of a revival of cycling that has also featured a proliferation of normal bicycles, both purely manual and electrically assisted.

The Muli and Tern bikes on display at cycle chain Velorution’s flagship store on London’s Great Portland St are designed to allow parents to take their children to school or nursery. While the Muli M18 — a relatively lightweight family cargo bike — is purely manual, the Tern GSD on sale at Velorution has twin batteries and can carry two children on the rear and a substantial load on a rack in front of the rider.

Improvements in both battery and electric motor technology are transforming the capabilities of such machines, according to Jonathan Cole, the retailer’s executive chairman. “Whereas before they were manual and you had to have a really big chap riding them, you now have electric cargo bikes.”

Business has led the way here. Daniel Levan-Harris, chief executive of Mango Logistics Group, is bullish about the cutting-edge vehicles he has purchased for his business, which specialises in moving goods over the last few miles to customers in central London.

He expects the new vehicles, which Mango has been using for the past nine months, gradually to supplant the diesel vans that perform many of the company’s drops and provide a more efficient, greener service.

The Urban Arrow cargo bike used by Mango is capable of moving up to 250kg of goods at a time but has only two wheels and so slips easily past traffic jams and down cycle tracks, according to Mr Levan-Harris. “I think the future would be pedal power, rather than drones or driverless cars,” Mr Levan-Harris says.

The growth of bike-borne deliveries is only one aspect of a revival in the use of human-powered vehicles that has pushed up the number of daily bicycle journeys in London from below 300,000 in 2000 to more than 700,000 in 2017.

The trend is replicated in other big cities worldwide. The number of New Yorkers cycling daily more than doubled between 2007 and 2017. Many big Chinese cities are pushing for revivals of cycling.

A series of innovations is encouraging the trend. They include the reduced weight and increased storage power of batteries to provide electric assistance. Cyclists also run less risk of getting lost thanks to wayfinding technology such as Google Maps.

For Mr Cole, two wheels offer a way for cities’ growing populations of older people to get regular exercise, as well as helping to reduce pollution and emissions of greenhouse gases. “I think this is a common message globally,” he says.

The trend towards increased use of bicycles is likely to continue, according to Nick Tyler, director of the Centre for Transport Studies at University College London, because private motor vehicles are “on their last wheels”, thanks to their role in creating pollution and congestion.

Bicycles provide a form of private vehicle that avoids nearly all of the car’s problems, Prof Tyler says: “Bikes are going to be very, very important.”

Mr Levan-Harris started switching his company to human-powered machines, he says, because of their environmental advantages. At 700 litres, the capacity of the big cargo box that sits in front of the rider is not far off that of a small van.

Electric assistance is not the only technological advance encouraging greater take-up of cycling. Manufacturers are steadily improving the quality of traditional or road-racing bikes so, for example, they offer a wider range of gears.

As cities move away from a reliance on motor vehicles, planners must not think that installing cycling infrastructure is the only way to encourage sustainable transport, argues Prof Tyler.

He insists it is important to think carefully about the design of footways for pedestrians, whose needs are often very different from those of cyclists. “Increasingly, we need to think about how we design the city so that it can be moved around without a vehicle.” 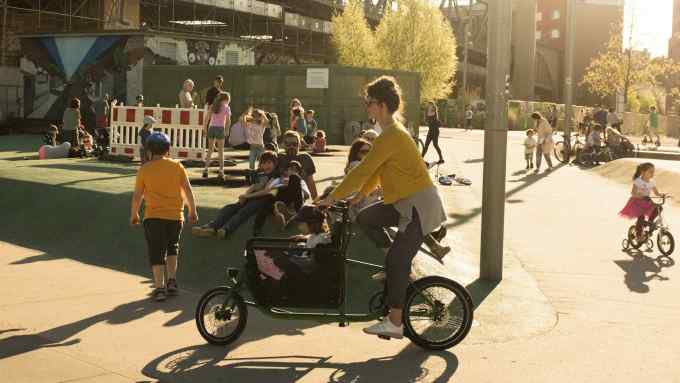