In central Manhattan, average travel speeds have fallen by a fifth since 2010 and in Bogotá, Colombia, drivers spend on average 272 hours sitting in traffic every year, according to analytics company Inrix.

The trend is only set to get worse as the world urbanises. By 2050 more than two-thirds of the global population are expected to be living in cities, many of them megacities of more than 10m people.

“If you could completely redesign Oxford Street, what would you do?” asks Warwick Goodall, a partner at PA Consulting who focuses on transport and mobility. “You’d route all the traffic above or below, pedestrianising [the city] at street level.”

So far, cities have mainly tried a combination of discouraging driving and encouraging walking and cycling. Paris has eliminated traffic from the lower quays of the Seine River, while Barcelona has received much international attention for its plan to organise the city into a series of “superblocks” — where cars are restricted to certain big roads, with streets in-between turned into pedestrian-only parks and playgrounds.

But new technologies could bring more radical changes. Micromobility, including electric scooters and bikes, is seen as a potential solution to moving people more efficiently around cities.

Dozens of start-ups including Bird, Lime, Voi and Bolt have flooded cities with shared scooters that can be rented by the minute. In a recent survey, some 34 per cent of riders in Portland, Oregon said they had used a scooter instead of driving a personal car or using a ride-hailing app or taxi for their most recent ride.

Scooter safety, however, is making city planners hesitate. Sweden’s transport agency is calling for electric scooters to be banned following the death of a man riding a Voi scooter in Helsingborg. More than 1,500 people were injured riding scooters in the US in 2018, according to estimates by Consumer Reports, the US consumer organisation.

For scooters to work, cities will have to create more safe pathways for them — possibly high above the city streets. Xiamen in south-east China, for example, has built a nearly 8km elevated cycleway for bikes. BMW group and China’s Tingyi University, meanwhile, have drawn up even more ambitious plans for a network of covered tubes above the streets for scooter and bike traffic. They say several cities have expressed interest.

Electric, self-driving cars could also radically change the look of cities. By 2050, we will have full “Level 5” autonomy” in vehicles, says Paul Newman, founder of Oxbotica, a company making such software. “This is when we get to cars with no windscreen and no steering wheel,” he says.

Such cars could change the way cities are laid out, says Willem Strijbosch, head of autonomous driving at TomTom, the mapping company. “It could free up a lot of space. If the vast majority of transport is done by autonomous vehicles the streets could be narrower,” he says.

Self-driving cars communicating with each other through a wireless network would be able to pass each other with centimetre precision. “You may be able to fit four lanes in where you previously had three. Traffic lights will be no longer needed. Cars will communicate via maps and will figure out right of way at crossings in a different way.”

Public transport could become highly personalised, says Mr Goodall. “For the last century, transport has been about building train sets. The next decades of transport will be built around personal needs. That is why Uber and other ride-hailing services have grown so quickly — you can hail a cab and it will arrive in two minutes. We will go from transport on fixed rails and routes to one that is hyper-personalised.”

An early example of this is being rolled out by Finnish start-up MaaS Global, which offers users a subscription service via a mobile app that includes public transport, ride-sharing, bike rentals, scooter rentals, taxis and car rental in their city. It is available in a handful of European cities and soon to launch in the US.

The idea of “transport in 3D” could also go a lot further than elevated bike lanes. US tech entrepreneur Elon Musk has plans to build a series of “hyperloop” tunnels underneath several US cities, where passengers would be transported at high speeds in pods inside vacuum-sealed tubes.

Meanwhile companies like Uber and Lilium are planning fleets of flying taxis, electric jets which could take off and land vertically from landing pods dotted around the city.

Are these plans far-fetched? Remo Gerber, Lilium’s chief commercial officer, says the company has been approached by several cities interested in running pilot programmes, in part because flying taxis are a potentially cheaper alternative to traditional infrastructure, such as bridges, bypasses and railways.

“We can be a good way of testing out the need for a transport link between points A and B without having to build anything,” says Mr Gerber.

Even the hyperloop is less expensive than, say, a traditional high-speed rail link, says Mr Goodall. “Railways have tracks, signalling, overhead wires. They are difficult to build and maintain. With the hyperloop, as long as the tube is airtight there are fewer moving parts,” he adds.

Money-saving promises will give these wilder ideas at least an opening with municipal planners. And with motorised traffic moving underground and into the air, the streets could be freed up.

Urban transport in 2050 may for some people include more of the oldest form of all: walking. 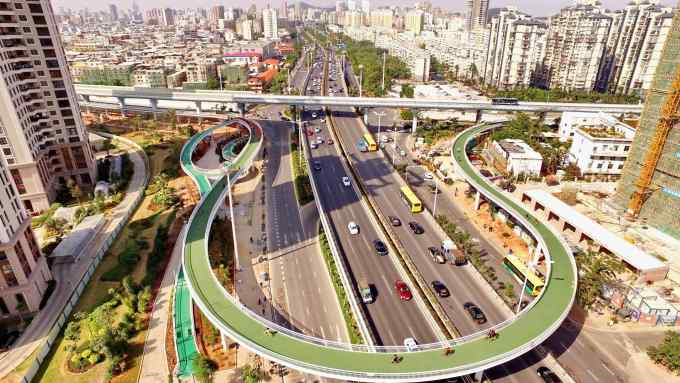