If you think the same, join us
Special Report How we will live in 2050
See all 36 stories
Adventure holidays

Explore five holidays of the future

From pop-up hotels to space tourism, futurologists present their visions

One in two people globally will take an international holiday in 2050, compared with one in seven now. That estimate, from futurology book 2050 — Tomorrow’s Tourism, would mean not far off 5bn travellers on the move every year.

They may have to book ahead. Visitors may face limits to tourist numbers such as the currently rare example of Barcelona’s cap on visitor accommodation, introduced two years ago.

Or they may encounter high fees. Bhutan, on the edge of the Himalayas, has a daily tourist charge of at least $200 per day, intended to protect the local environment.

“Tourism is about balance,” says Ian Yeoman, associate professor of tourism futures at Victoria University of Wellington, New Zealand, and the book’s lead author. “It will always be here. The question will be how we manage it.”

Around the world in 40 minutes

Short city breaks are likely to grow in popularity, futurologists predict, but people may be travelling further afield, in a shorter time, than they do now. As technology advances, making aircraft faster and more efficient — even hypersonic — a weekend break could mean a four-hour flight from London to Shanghai.

Travellers may prefer to take the “hyperloop” envisaged by entrepreneur Elon Musk. “It could take 20 minutes to travel from London to Rome, travelling in a vacuum tube — similar to the tubes that supermarket cashiers in the 1960s used to send cash from the till,” says Frank Shaw, foresight director at the Centre for Future Studies at Kent University in the UK.

On the other hand, the evolving nature of careers, with more people working remotely, is likely to blur the boundaries of what a holiday means.

“The borders between work and leisure are disappearing,” says Kai Landwehr, head of marketing at Myclimate.org, a campaigning organisation in Switzerland. “For 10 months of the year, you could be abroad.”

Popping up in the rainforest

Tourism may become a moveable feast. Hotels underwater and rainforest pop-ups are possible, particularly if the structures can be built — and taken down — in a way that does not degrade the environment. They could even be moved between destinations, according to their popularity.

“We had a pop-up hotel in Munich — using a disused building — it was a huge success. Empty offices could be used as pop-ups for travel,” says Xenia zu Hohenlohe, co-founder of Considerate Group, which advises hospitality companies on how to operate responsibly.

Mr Shaw agrees: “Maybe we’ll have temporary structures so you could go to the Amazon forest for a fortnight, and then the facility is moved elsewhere.”

It is also likely that tailor-made trips will rise in a more fragmented market, where people extend their hobbies such as gastronomy into holidays. In 2050, for example, Mr Yeoman sees a 135-year-old chef teaching travellers how to make kimchi in South Korea.

Technology is expected to play a huge part in driving change and virtual reality will redefine what we mean by having a holiday. One such VR experience available today is Birdly, which allows users to fly like a bird through the streets of New York.

Technology will connect with our emotions so that “we will want to not only see Thailand but how it feels”, says Mr Landwehr. “You could end up with fewer people travelling and instead taking a virtual trip.”

Our perceptions could even be altered, so that like in the blockbuster movie Avatar it would be difficult to distinguish between what is real and what is virtual. “The perception is that you are there and you would actually be there,” says Mr Shaw. “You could sign the Magna Carta on your holiday.”

To boldly go a little further

Meanwhile, technology is also one of the key drivers of the future where space tourism is concerned. “Everything else Star Trekky is possible,” Mr Yeoman wrote in his book.

Virgin Galactic is already aiming to provide suborbital flights, including several minutes of weightlessness. By 2050, travellers could enter the stratosphere and see the view of a lifetime.

Could space tourism go one step further, to a stop on the moon? If so, it will remain a pastime for the super-rich, say futurologists. After all, Dennis Tito reportedly paid $20m to become the first space tourist in 2001.

Get away from it all

If all of those trips sound like a nightmare, there is no need to worry, because these futurologists think it will still be popular to switch off and go on a voyage of self-discovery, as popularised by Julia Roberts in Eat, Pray, Love.

The industry will respond particularly to tourists aged from 60 to 100 as that demographic bracket increases, globally. “That type of isolation and getting back to basics with nature” will be appealing, Mr Yeoman predicts, as people try to find relaxation, stay healthier for longer and avoid overcrowded tourist spots. 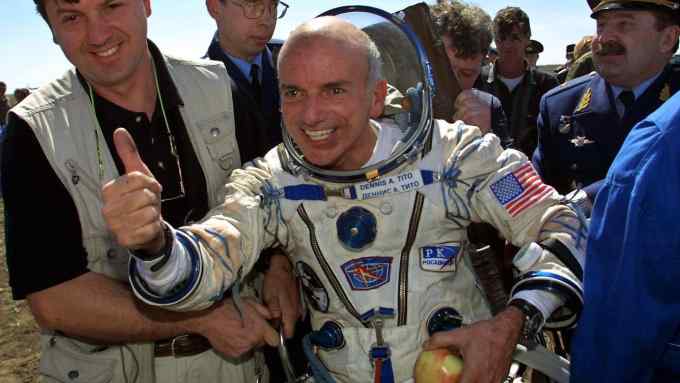