Electric planes: the revolution has some snags

To go beyond short hops, big developmental jumps are needed

A plane called Alice hopes to steal the limelight at the Paris air show this week. The biennial event traditionally features the world’s aerospace giants Boeing and Airbus slugging it out in a very public battle of orders, but this year it promises to showcase the industry’s bright hope for the future: electric aircraft.

The brainchild of an Israel-based start-up called Eviation, Alice — which is still under development — promises to redefine the regional aircraft market by carrying nine passengers up to 650 miles at a cruise speed of 240 knots. Many in the industry believe that an all-electric aircraft with a useful range and seating capacity is at least a decade away but some pioneers like Eviation believe that future could come sooner. The company hopes to begin shipping its plane for commercial use as soon as 2022.

Alice will have competition at the show. Some of the world’s biggest industrial names from Boeing to Rolls-Royce are working on plans to bring electrically powered aircraft to market. The industry is in the throes of the greatest revolution since the development of the jet engine by Frank Whittle in 1937.

There are about 170 different electric aircraft developments around the world, according to a recent estimate by consultancy Roland Berger — up 50 per cent since April 2018. The air taxi market accounts for more than half. Around a tenth are focused on the regional and large commercial markets, covering short-haul to medium-haul services. The rest covers the business jet and general aviation market.

The catalyst for all this innovation is a global drive to clean up aviation pollution, which accounts for 2 per cent of carbon dioxide emissions.

“The industry is increasingly feeling the environmental pressures,” says Robert Thomson, partner at Roland Berger. “Electrical propulsion will be the biggest revolution for the industry since the 1940s — when it comes.”

The EU’s Flightpath 2050 programme calls for a 75 per cent reduction in carbon emissions per passenger kilometre by 2050, compared with 2000 levels. Nitrogen oxide emissions, an important contributor to air pollution, are supposed to fall by 90 per cent, and aircraft noise by 65 per cent.

But aircraft manufacturers and airlines are also working hard to meet the unrelenting demand from the public to fly — the International Air Transport Association predicted last year that passenger numbers could double to 8.2bn by 2037.

There is a wide range of predictions as to when electric flying will become commercially viable. Most agree that by 2050 fully electric flying taxis that carry small numbers of passengers short distances will be a reality.

Hybrid electric planes, which still use a traditional gas turbine for thrust, will probably also be in the air, focused on regional networks. But the industry consensus is that it remains unlikely that people will be flying long distances on an all-electric plane.

Paul Eremenko, chief technology officer at the US industrial conglomerate United Technologies, points out that the “performance of the jet engine has roughly only doubled twice since it was invented” in the mid-1900s.

“If you confine yourself to thinking about traditional technology, the pace of progress has been pretty slow. So the issue is, is there another bunch of technologies out there that will disrupt the industry?” he says.

Rolls-Royce is working on three different proposals focused on electric flight. But Paul Stein, chief technology officer, foresees little change for mid-market jets such as the A320 or for larger aircraft. These “will still be flying in a traditional tube and wing powered mainly by gas turbines,” Mr Stein says, although he thinks sustainable fuels will play an increasing role.

One challenge is replicating the energy density of kerosene — for batteries, it is about 60 times less. Another problem is weight: as conventional jets burn fuel they get lighter but a hybrid or all-electric plane will have to carry the same battery weight throughout the flight.

Hydrogen fuel cells could also play a role in an electric future. The University of Illinois announced this year that Nasa is underwriting a project to develop a cryogenic hydrogen fuel cell system that could power an all-electric aircraft.

One of the challenges with hydrogen fuel cells is that they take up a lot of space, but researchers found a way to cryogenically cool the cells and condense them into a liquid. Mixing this liquid with oxygen in the engine generates a powerful reaction whose energy can be converted into electricity to power a propulsion system.

For electric planes of all stripes, regulation and certification are significant hurdles. Aviation safety regulators in Europe, the US and China are all working on proposals for flying taxis but getting a large, all-electric airliner certified is likely to take decades.

Experts predict the biggest changes will happen in the regional aircraft space and the commuter market. By 2050, says Mr Stein, regional aircraft that carry between 20 to 90 people up to 1,000 miles are likely to be hybrid. Flying machines will be more efficient, quieter and require a shorter runway.

Guy Norris, aerospace expert at PA Consulting, expects the entire transportation infrastructure will change as the industry grapples with challenges such as charging. With demand for air travel rising inexorably, Mr Norris predicts there will be a “tipping point where people get fed up with sitting in big airports for a long time”.

“The question is, how do you make money?” he says. “What is the operating model? Will the transport on offer be point-to-point or more like a bus, where you can get on and off?”

The conventional shape of a plane as a tube with two wings could also change as electrical propulsion takes off. So-called “blended wing” passenger planes have been on the drawing board of research laboratories for decades, but have never become reality. This shape has no clear dividing line between the body and the wings. Instead, the wings blend into a wide flat fuselage.

For passengers flying long-haul, the digital environment inside the plane is likely to be the main thing that changes, with virtual reality entertainment or another immersive experience expected to be on offer.

Any change will not happen overnight. “The history of aviation, particularly in larger aircraft, has been one of evolution rather than revolution,” says Mr Stein.

READ MOREHow we will live in 2050
Electric planes: the revolution has some snags 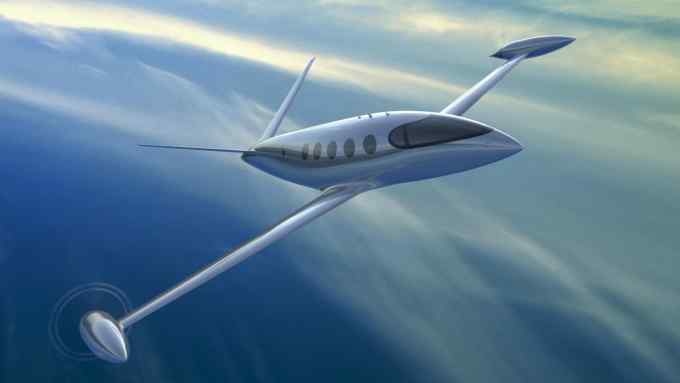