Japan’s hydrogen dream: game-changer or a lot of hot air?

On a Tokyo street in 2050, a long queue of automobiles belch their exhaust into the evening sky. A bus brakes hard as it makes its stuttering progress through town. Yet all the while, the air quality is excellent because these vehicles emit nothing but water vapour: the sole exhaust product from the hydrogen fuel cells that lend them power.

This is a vision shared by Japan’s government and its world-leading auto industry, which are together making a huge bet that hydrogen — not batteries — will provide power for the emission-free cars of the future. Starting with the Tokyo Olympics in 2020, they want to put millions of hydrogen vehicles onto the nation’s roads.

Entrepreneurs and researchers worldwide are pursuing hydrogen. An industry-government collaboration in California targets 1m hydrogen-powered vehicles by 2030. Anita Sengupta, co-founder of US aviation start-up Airspace Experience Technologies, sees hydrogen fuel cells as a viable option for longer-range commercial jets by 2050. But there is nowhere more enthusiastic than Japan.

“Hydrogen, as both a primary source, and more importantly, a carrier of energy, must become cheaper and more easily affordable,” declared prime minister Shinzo Abe in Davos this year. “My government is aiming to reduce the production cost of hydrogen by at least 90 per cent by the year 2050, to make it cheaper than natural gas.”

The big bottleneck is carbon capture and storage. It’s not that it can’t be done. It’s the economics.

The hydrogen vision published by Japan’s ministry of economy, trade and industry is expansive. It starts with brown coal in Australia, which will be gasified to produce low-cost hydrogen, with the carbon pumped back underground.

The hydrogen will then be shipped to Japan on vast tankers and distributed to a nationwide network of filling stations. Finally, it will be pumped into cars, buses and trucks, all equipped with affordable fuel cells to convert the hydrogen into electricity to power their wheels.

Get it right and hydrogen offers a way to fully decarbonise Japan’s transport sector, using fuel from a reliable strategic ally, while providing the automotive industry with a fresh source of competitive advantage over international rivals. The only problem is that this visionary infrastructure does not yet exist.

“One can’t forecast whether there’ll be a hydrogen society by 2050. It’s in the realm of scenario planning,” says Tetsuya Kaneko, a senior consultant on energy issues at Nomura Research Institute. “From a technological perspective, the biggest issue is large-scale provision of hydrogen.”

At present, hydrogen is mainly produced as a byproduct in the chemical industry, during processes that emit carbon dioxide. It can also be produced by electrolysis from water, but if fossil fuels were burnt to provide the electricity, this is not carbon-free either. The plan to import hydrogen from Australia is still at the pilot phase.

Meti’s road map calls for a hydrogen supply cost of ¥30 per normal cubic metre by 2030 — down from a cost of several hundred yen during the pilot coal-to-hydrogen project.

“The big bottleneck is carbon capture and storage,” says Takeo Kikkawa, professor of management at the Tokyo University of Science. “It’s not that it can’t be done. It’s the economics.”

Get the hydrogen to Japan and there is still the need for vehicles and fuelling stations — and it is hard to justify building one until the other is in place. The road map demands a fall in the price premium for fuel cell vehicles over hybrid vehicles from ¥3m ($27,690) today to ¥0.7m by 2025.

Analysts remain politely sceptical given the cost challenges and the lack of infrastructure. Toyota, one of the biggest backers of hydrogen, has recently stepped up its investment in battery-powered vehicles.

But Japan is unlikely to give up easily on the hydrogen dream. “I think Japan is the most advanced nation in the world for hydrogen,” said Mr Kaneko. “If you ask why, it’s because Japan has so few other options to reduce its carbon emissions.”

Japan’s small, mountainous and densely populated islands are ill-suited to large-scale production of renewable electricity, while in the aftermath of the meltdowns at Fukushima Daiichi in 2011, the country has little appetite for nuclear power. If those constraints remain, some form of carbon-free import is all that is left.

“We have to consider hydrogen as an option,” said Mr Kaneko. “But at present it’s only an option.”

READ MOREHow we will live in 2050
Japan’s hydrogen dream: game-changer or a lot of hot air? 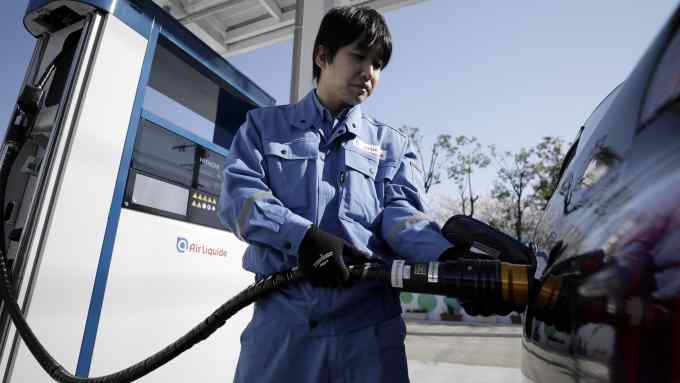