Mohammed Chaer runs what was once Syria’s second largest detergents business. Naturally the country’s seven-year civil war, in which hundreds of thousands have been killed and millions displaced, has taken its toll. Not only did Mr Chaer have to shut down his factory outside Damascus for three years, key trade routes into Syria were closed. His transport costs tripled as he was forced to import raw materials by sea.

But now based in Jordan, 55-year-old Mr Chaer has had a rare piece of good news. Three years after it closed amid fierce fighting, the Nassib-Jaber border crossing between Syria and Jordan reopened in October, reviving a trade link worth billions of dollars and marking a step towards reintegrating Syria into the regional economy.

Mr Chaer says the reopening of this artery is “very important” for his business. Maritime shipping between Jordan and Syria took 40 days. By land, it takes just two.

Although the resuscitation of an economic lifeline for Syria runs counter to US and EU policy — which has tried to punish the regime’s brutality towards its citizens with harsh financial sanctions — the move has been enthusiastically welcomed by its neighbours.

In Jordan, transport company JETT relaunched its Amman-Damascus coach service, while some Jordanians have reportedly crossed the border to take advantage of cheaper prices in Syria.

With economies in the Middle East closely tied together, this crossing in the south of Syria is a key transit route for neighbouring Lebanon in particular.

Sharing a 230-mile border with Syria, Lebanese exporters relied on trucking goods through Syria and then into Jordan, to reach markets beyond. Lebanon’s already feeble economy has suffered collateral damage in its neighbour’s seven-year civil war, particularly the loss of land routes through Syria. Lebanese businesses say they have much to gain from the reopened Syria-Jordan transit route.

Fouad Makhzoumi, a Lebanese MP and entrepreneur, said he hoped the newly-opened border crossing would act as a spur to the Lebanese economy.

“I believe that opening the crossing between the Arab countries is an additional factor urging us to order our economy and make use of opportunities arising from an atmosphere of solutions in the region, especially in Syria,” he said.

Before it closed in April 2015, most exports from Lebanon and Syria passed through the Nassib border crossing en route to Jordan and the Gulf countries beyond it. These are key export markets for Beirut. Almost half of Lebanon’s trade by value in 2017 was with other Arab countries: Saudi Arabia, Iraq, the United Arab Emirates and Syria were its biggest markets.

But without the vital Nassib crossing, many Lebanese exporters had to ship their goods part of the way by sea, a much more expensive operation than trucking them the whole way. To offset additional shipping costs being shouldered by these businesses, the Lebanese government in 2015 introduced a subsidies programme, eventually worth some $15m overall.

Exports still declined. The value of Lebanese exports peaked around $4.5bn in 2012, according to the ministry of economy and trade. Last year that figure was less than $3bn, Lebanon’s lowest annual export value since 2007, which followed the destructive war between Lebanese Hizbollah, the Iranian-backed Islamist group, and Israel.

Nassib’s reopening should support Lebanon’s agricultural and industrial exports in particular. “Lebanese farmers will now be able to resume the export of their products to Arab countries through the land route,” wrote Byblos Bank, a Lebanese lender.

Now many are hoping the Iraqi-Syrian border will be the next to reopen.

Gebran Bassil, Lebanon’s foreign minister and son-in-law of its president Michel Aoun, tweeted that “after opening of the Nassib border crossing, we hope that the border between Iraq and Syria will give us increased economic oxygen”. 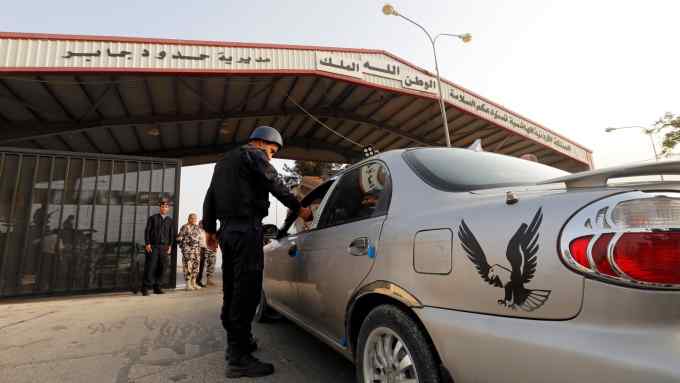