As governments and businesses issued condemnations of Saudi Arabia this month amid the furore over the suspected murder of Jamal Khashoggi, one country just sat and shrugged.

“In truth, we do not know what happened,” said Russian president Vladimir Putin. “So why should we take any steps that could harm our relations with Saudi Arabia?”

Days later, at an investment conference in Riyadh shunned by many of the west’s business leaders, Russia arrived with a sizeable delegation including 30 top executives.

It was the strongest signal of a burgeoning relationship that has united two of the world’s energy superpowers and has the potential to up-end the politics of the Middle East. On the sidelines of the ‘Davos in the desert’ conference, the Saudi energy minister said the kingdom aimed to acquire 30 per cent of Russian gas producer Novatek’s $21bn liquefied natural gas project in the Arctic.

Collaboration between Russia and Saudi Arabia, once seen as impossible, but now holds sway over much of the global oil market. Amid crisis talks two years ago as the oil market collapsed, the two countries took a decision to regulate global crude supplies, propping up the market.

The unexpected success and longevity of that oil deal, first signed in December 2016, has prompted talks about corporate tie-ups and cross-border investments, as well as deals for Russian companies to sell arms to one of Washington’s main allies in the Middle East.

The new Saudi-Russian relationship, when seen alongside Moscow’s steadfast support of Syrian president Bashar al-Assad and its oil and gas investments in Iran, Iraq and Egypt, is reshaping the geopolitics of the Middle East.

Despite a complex web of alliances and rivalries in the region, Moscow has emerged as a powerbroker. Iran and Saudi Arabia have fought a proxy war for decades, and Iran and Israel back different sides in Syria — yet all three countries see Russia as an ally.

“Our bilateral relations have developed effectively in the sphere of politics, in the sphere of economic co-operation,” Mr Putin told the crown prince at a meeting in the Kremlin this summer. “We still have a lot to do in this area. But it is already clear now that our interaction is very effective and useful both for Saudi Arabia and for the Russian Federation.”

The oil deal is formally between Opec and a number of non-members of the crude cartel and mandates a cap on production — a move that helped drag up global oil prices from around $30 a barrel in 2016 to around $80 today.

But while it was rubber stamped by Opec’s members, it was agreed by Russia and the bloc’s de facto leader, Saudi Arabia. Between them, the two countries pump more than 20m barrels of oil a day, roughly a quarter of the world’s production.

Such a friendship was once considered impossible. Russia saw Opec as an enemy and a rival on the global market. But Moscow, under international sanctions, needed new friends and investors, and Riyadh needed a powerful partner to drag up the oil market.

“It is a very useful relationship. We have always had the resources, and now this friendship allows us to help fix global prices, too,” a Kremlin official told the FT on condition of anonymity. “We have gained a certain amount of control. Either we pump less oil at a higher price, or we pump more at a lower price. Either way we make money.”

But Christopher Granville, managing director at TS Lombard, a research consultancy, says that while the relationship proved more enduring than analysts expected, short-term shared goals mask longer-term divergence on both oil and geopolitics.

A higher oil price encourages production elsewhere, and giving up market share to other producers, mainly the US shale oil industry. While Saudi Arabia, which needs $70 oil to balance its budget, is happy to make this sacrifice, Moscow breaks even at just $40 a barrel. “Russia has no such need” to give up market share for higher prices, Mr Granville said.

A spike in prices this autumn caused by US sanctions on Iranian oil exports resulted in a tweak to the deal to allow more production — a move cheered by Russian oil companies that had asked for a higher ceiling.

“For now, the tactical convergence of Saudi and Russian aims outweighs the strategic divergence,” he said. “[Mr] Putin wants to maintain Russia’s advantageous geopolitical position of being the only important external power in the Middle East to have a good working relationship with all regional players.”

Mr Granville added that “Putin’s geopolitical preference would prevail over Russia’s strategic interest in a lower oil price unless and until a new crisis erupted in the Middle East, such as some sort of conflict between Saudi Arabia and Iran”.

At present, both sides appear keen to deepen the relationship. Saudi Aramco, the kingdom’s state-owned oil company, is in talks with Russia’s Sibur about setting up a joint petrochemicals factory, and is in discussions over buying a stake in Russia’s upcoming $25.5bn Arctic LNG 2 project.

Rosneft and Gazprom Neft, two Russian state-controlled oil producers, are in talks with Aramco about potential supply sharing, and joint research and development projects, while Riyadhhas agreed in principle to a multibillion-dollar deal to acquire Russia’s S-400 missile defence system.

“The Russia-Saudi alliance has already demonstrated its leading role,” said Kirill Dmitriev, chief executive of the Russian Direct Investment Fund. “In bilateral relations we expect that co-operation between Russia and Saudi Arabia in Opec+ format will double mutual investment between the two biggest oil producers within 3 years.” 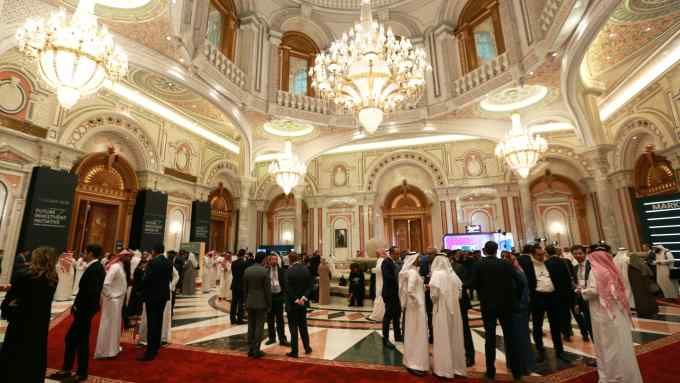