We’ll send you a myFT Daily Digest email rounding up the latest Djibouti news every morning.

This February, the small African nation of Djibouti took control of the Red Sea container port of Doraleh from DP World, completing what it considers the final act in a lengthy wrangle with the Dubai-based ports operator.

Djibouti has accused the international ports company, which had operated Doraleh since 2006, of deliberately underusing the facilities in favour of other terminals along the Red Sea.

“It is obvious they want to control the whole sea transport from Singapore to the Suez Canal,” Aboubaker Omar Hadi, chairman of Djibouti Ports & Free Zones Authority, told the FT. He added that DP World also operated Jeddah port in Saudi Arabia and Berbera in the unrecognised state of Somaliland.

In July, Djibouti started the first phase of a $3.5bn free trade zone in which China Merchants Group and Dalian Port Authority hold a stake, a development that DP World says violates its 30-year exclusive concession.

The Dubai company has vigorously contested Djibouti’s version of events, pointing to a ruling by the London Court of International Arbitration — dismissed as “inconsequential” by Djibouti — that DP World’s contract cannot be revoked.

“We will take every action to protect the rights of the shareholders.” Sultan Ahmed bin Sulayem, DP World chairman and chief executive, said. “The action actually has hurt Africa as a whole,” he said, adding: “Anyone that builds a port or an infrastructure project and goes to borrow money, the banks will ask for more interest because the possibility of takeover by government becomes real.”

The tussle over Doraleh is a microcosm of a much larger struggle for influence on the Red Sea and the Gulf of Aden that has sucked in not only Gulf and Middle Eastern powers, but also the likes of China, the US and France.

Those three countries, together with Japan and Saudi Arabia, have military bases in Djibouti, ostensibly for fighting near-endemic piracy — most of it off the Somali coast. The proximity of these major powers, particularly China, in tiny Djibouti adds another dimension to what is already a multi-faceted battle for military as well as economic clout in the region.

Some argue that there need to be as many as 10 ports serving the Horn of Africa, which is dominated by Ethiopia, a landlocked, fast-growing country of 105m people whose economy has expanded more than ten-fold over the past 15 years to some $80bn. As well as Ethiopia, the Horn includes Eritrea, Somalia and Somaliland, plus Djibouti, making it home to roughly 160m people. Battle for influence is not only regional: virtually all of the sea trade between Asia and Europe passes along the Red Sea on its way to or from the Suez Canal.

DP World has just begun a $442m investment to increase Berbera’s capacity fivefold, a boost to the political aspirations of Somaliland which declared independence from Somalia in 1991 but has yet to win recognition from the United Nations.

The renewed struggle for influence, in which many of the dynamics of the Middle East play out in shadow form, comes at a time of enormous change in the Horn. The biggest new factor has been the selection in April of Abiy Ahmed as Ethiopia’s prime minister.

At 42, Africa’s youngest leader Mr Abiy has not only turned his country upside down, for example by releasing thousands of political prisoners and preparing to privatise key areas of the economy, including telecoms and the national airline. He has also concluded peace with Eritrea, ending a 20-year war and giving Ethiopia access to the ports of Assab and Massawa, which were lost when Eritrea clinched independence in 1993.

Mr Abiy’s whirlwind diplomacy has underlined the invigorated role Gulf and Middle East states play in the region. Saudi Arabia was keen to present itself as a peace broker between Ethiopia and Eritrea, while the United Arab Emirates has made investment and loan commitments to Ethiopia of $3bn, helping to stave off a foreign currency crisis.

Ethiopia has also engaged in furious port diplomacy. It has agreed to take a 19 per cent stake in Berbera alongside DP World, which holds a 51 per cent stake, and Somaliland, which has the rest.

It has also concluded agreements in principle to take stakes in Port Sudan and Djibouti port. The latter currently handles 90 per cent of Ethiopia’s trade. Since last year, Djibouti has been linked by a new $4bn Chinese-built railway to Ethiopia’s capital of Addis Ababa, another sign of Beijing’s growing influence in the region.

Mr Hadi of Djibouti Ports said all this activity underlined the rationale for expanding Doraleh, though he was not sure whether the region could sustain 10 ports.

In future, he said, Djibouti could cater to the rising volume of exports from Ethiopia’s manufacturing zones. Djibouti could also beef up its role as a transshipment hub to terminals further down the African coast, such as Dar es Salaam in Tanzania, Maputo in gas-rich Mozambique and Durban in South Africa, he said. 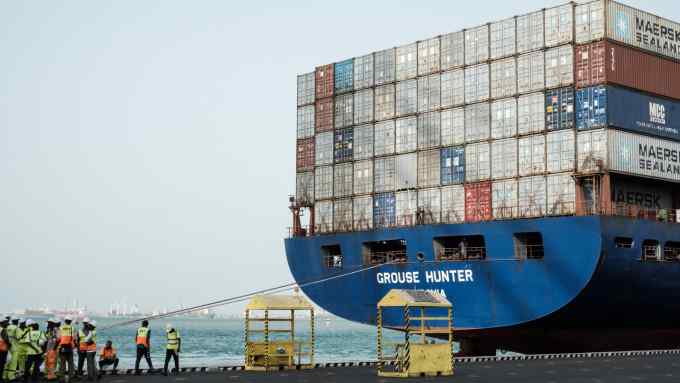