When the Iraqi autonomous region of Kurdistan went looking for someone brave enough to pump billions of dollars into developing its large oil and gas reserves, it found a man who has never been accused of lacking courage: Igor Sechin, an old friend of Russian president Vladimir Putin.

The chief executive of Rosneft, Russia’s state-owned oil company, has ignored fears of conflict, criticism from western powers and navigated a web of regional, religious and political associations to emerge as Iraqi Kurdistan’s single biggest financier. In the process he has moved a US military stronghold much closer to Moscow.

Rosneft, the world’s largest publicly listed oil producer, says the investments are just good business, and have nothing to do with politics. But the Kurdistan projects will produce just 10,000 barrels of crude per day by the end of this year — only 0.2 per cent of its total daily production: low on output and high on symbolism.

“Like any company, Rosneft seeks out deals that make commercial sense, but energy is one of Moscow’s most powerful tools and its geopolitical priorities are a major factor in Rosneft’s choice of commercial partners,” said Chris Tooke, principal analyst for Russia at GPW, a political risk consultancy. “Kurdistan is an example where Russia’s geopolitical and commercial aims go hand in hand.”

Kurdistan has long been considered a close ally of the US. But the recent expansion of the Kremlin-controlled oil major has given Russia a significant foothold in Erbil. This is part of a trend mirrored across the Middle East as Moscow responds to a shrinking of US influence by stepping up its relations with countries such as Saudi Arabia and Iran.

Rosneft in May signed an agreement with the Kurdistan regional government to explore the potential of developing its natural gas reserves and building a gas pipeline. This could in theory carry exports to Europe in one of a string of deals made between Mr Sechin and Erbil over the past two years.

Over the past 18 months, the Russian company has paid about $3.5bn to the Kurdistan administration including: $400m to develop five exploration blocks; $1.8bn for control of the region’s export pipeline, and a $1.2 loan in pre-payment for oil produced by companies other than Rosneft.

While that has provided a financial lifeline to the region’s government, it has angered the Iraqi administration in Baghdad, which says Erbil does not have the right to sign commercial deals with foreign oil companies without its blessing.

“In accordance with our constitution, only the central, Baghdad government has the authority to sign such contracts and so those ones are illegal,” said Iraq’s ambassador to Moscow, Haidar Mansour Hadi.

After Kurdistan held an independence referendum in September 2017 — condemned by the EU, US and Turkey but not Russia — Baghdad sent troops to seize control of major Kurdish oilfields, disrupting the region’s critical oil production and exports.

That makes Rosneft’s control of the export pipeline, which pumps Kurdish crude to Ceyhan on Turkey’s Mediterranean coast, a key lever in relations between Erbil and Baghdad, and places the Russian company at the centre of talks between the two.

Despite the military intervention last year, and the legal war of words over his already-signed deals, Mr Sechin doubled down in May with the gas pipeline agreement. If Rosneft were to go ahead with the pipeline, which could carry billions of cubic metres of gas to Turkey and Europe, the Russian company would have unrivalled control over the region’s energy exports.

“This is a key project in the monetisation of the exploration and production opportunities Rosneft has been evaluating since signing a gas co-operation agreement with the Kurdistan Regional Government of Iraq,” the company said in a statement. “Following the outcomes of the integral development plan in terms of the attractiveness and efficiency of the options, Rosneft will decide on how to participate in the regional gas business.”

“This is definitely part of Russia’s larger Middle East play,” said Mr Tooke. “Uniquely for a world power, Russia has successfully built ties with a broad range of the most divisive countries in the region such as Iran, Syria, Saudi Arabia, Israel and Qatar.”

“In Iraq, Russia is looking to leverage its strong position for a broader political role and become an indispensable player in the country, just as it has done in Syria and is looking to do in the Middle East more broadly,” he added. 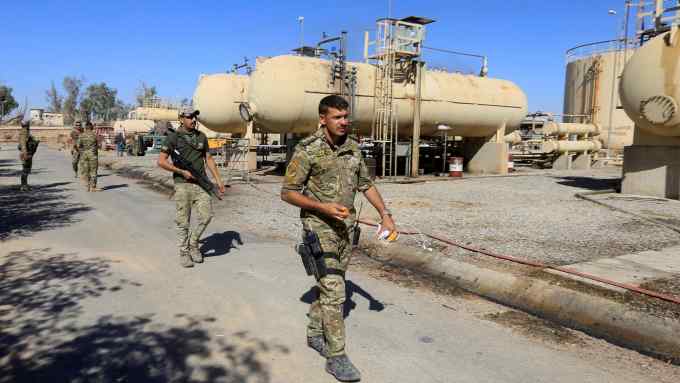