Across Europe, a range of organisations are using technology for healthcare, to improve public services, drive political engagement and strengthen communities — a trend we call digital social innovation (DSI).

Our recent research, as part of the EU-funded DSI4EU project, showed that the number of European DSI organisations has nearly doubled since 2015, and now stands at almost 2,000. All these projects are mapped online and innovators can add their project via the website.

The question is no longer how technology can be used for social good but why so few of these projects have gone mainstream in the way commercial technology has. New technologies have changed how we shop, travel and socialise, but the same can’t be said for social challenges. Even some of the best ideas have struggled to scale beyond their original locations and early adopters.

One reason DSI has struggled to reach its potential is a lack of investment, both financial and non-financial. At Nesta, the UK-based innovation foundation, we identified hundreds of incubators and accelerators in the UK, but only 6 per cent of them described themselves as having a social focus.

There are growing pockets of activity. Bethnal Green Ventures in London was set up in 2011 as Europe’s first ‘tech for good’ accelerator. Funders such as Nominet Trust and the European Commission are providing grants to social technology projects, while the ShareLab Fund has been set up by Nesta to explore how collaborative digital platforms can help address social challenges such as providing work for refugees and teaching homeless people new skills. However, the finance provided through these funds is minimal compared with their commercial counterparts.

Many charities and grassroots organisations lack technical skills. A study by Lloyds Bank found over three-quarters of them invest nothing in technology training and almost half of staff lack basic digital skills. Nesta found only 15 per cent of UK charities had used a crowdfunding platform; those that hadn’t cited the lack of digital skills as the main reason.

Organisations such as the Centre for Acceleration of Social Technology (CAST) are attempting to change this by helping charities increase their digital capability. For example, CAST worked with Breast Cancer Care on developing BECCA, an information app for women recovering from breast cancer.

The public sector could also do more to adopt new digital technologies. Some cities have put programmes in place. The Decide Madrid platform, for example, allows citizens in the Spanish capital to put forward, discuss and vote on issues that matter to them. Citizens’ suggestions for ideas such as electricity-generating paving and municipal food banks are now being funded and implemented by the city authorities.

Similarly, in Iceland, the Better Reykjavik platform enables citizens to submit ideas and information, rank priorities and allocate public resources. So far it has enabled roughly €3.6m of investment in more than 400 citizens’ ideas. In London, the ambulance service has teamed up with the GoodSAM app, linking first responders to emergencies at the same time as an ambulance is called. At times of crisis, this can dramatically improve people’s chances of survival.

There is still a long way to go. While digital government is advancing, it has tended to rely too much on big companies and digitising existing services, rather than involving citizens and rethinking how democracy and public services work. It remains difficult for smaller companies and organisations to win public sector contracts — despite the fact that the vast majority of public sector leaders worldwide are not satisfied with their technology vendors and would like procurement to change.

If just a fraction of the money spent on commercial and military technology was put into DSI, it could transform the way in which societies tackle social challenges. We now need charities, funders and governments to grasp this potential by developing the right skills for digital and experimenting with new ways of integrating DSI into public services.

From Nesta’s ‘What next for Digital Social Innovation?’ report, part of the DSI4EU project.

From Nesta’s ‘What next for Digital Social Innovation?’ report, part of the DSI4EU project.

Matt Stokes and Peter Baeck are in the research, analysis and policy team at Nesta and co-authors of the report ‘What Next for Digital Social Innovation?’ 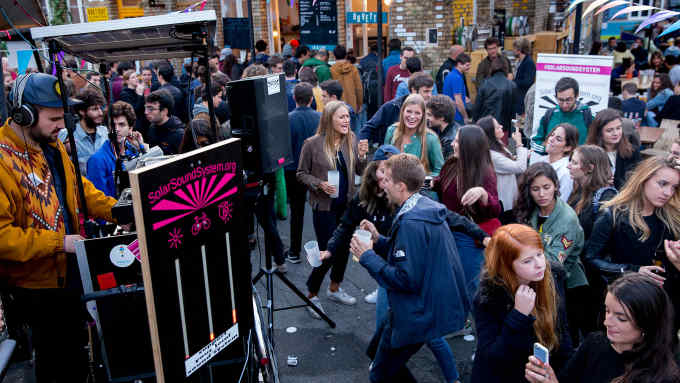