Attracted by some of the highest yields in the world, foreign debt investors have been piling into the Egyptian market since late 2016 when the country signed a $12bn loan agreement with the IMF, floated the pound currency and introduced harsh austerity measures aimed at restoring fiscal balances.

Foreigners have predominantly been buying short-term maturity paper, most of it under one year, for carry trades — where money borrowed at one interest rate is invested in assets that pay a higher rate.

Egypt’s reputation as the darling of emerging market investing was briefly called into question last month, after allegations of corruption and misuse of public funds by the army and president triggered mass protests — claims that President Abdel-Fattah al-Sisi has dismissed as lies. The authorities arrested more than 3,000 people to pre-empt any repeat of the unrest.

The protests do not appear to have had a lasting impact on investor appetite for the country’s debt, however. In October overseas investors held some $20bn in Egyptian T-bills and bonds. Even after the country’s central bank reduced interest rates twice this year, by a total of 250 basis points, yields remained attractive, analysts say.

Yields on one-year T-bills hovered between 15.2 and 15.9 per cent in early October after the second rate cut of 100bp. Investment bank Citi estimates as much as $800m flowed out of Egyptian debt in the wake of the protests, but analysts say a significant portion could return by early 2020 if there is no further unrest.

“Egypt remains popular because it is a high-yield jurisdiction that is relatively stable and especially attractive in comparison to other emerging markets because of its macro-stability,” says Farouk Soussa, Middle East and north Africa economist at Goldman Sachs. “Importantly we do not expect major fluctuation in the exchange rate given significant [foreign exchange] liquidity buffers that have grown in recent months.”

Egypt has earned praise from the IMF for its reforms and it has seen significant improvement in macro indicators. The economy, the fastest growing in the Middle East, expanded by 5.6 per cent in the fiscal year that ended in June. The debt issued will help pay down the budget deficit, which dropped to 8.2 per cent of gross domestic product, down from 9.8 per cent the year before. Reserves grew from about $15bn in 2016 to $45bn in September 2019.

The country’s overall debt, however, remains hefty and, analysts say, a major vulnerability at 90.5 per cent of GDP in the June 2019 fiscal year. The government aims to bring it down to 82 per cent by next June.

But the interest bill continues to be a huge drain on the budget, accounting for 36 per cent of spending in the current fiscal year.

“For investors buying Egyptian debt, the main credit strength is the reform implementation and the reserves or buffers established on the external side,” says Elisa Parisi-Capone, vice-president at Moody’s, the rating agency.

“The main challenge we see is the large fiscal deficit and the interest bill is still very high. It takes time to reduce it consistently and sustainably.”

Despite the inflows of hot money from overseas buyers, the country has not been able to attract much foreign direct investment beyond its oil and gas sector.

Even as Egypt emerges from a three-year IMF programme with improved fiscal discipline and a cheap pound, it has failed to boost manufacturing and non-oil exports.

Economists say domestic consumer demand has not bounced back to levels seen before the 2016 currency devaluation, and inflation has sharply eroded Egyptians’ purchasing power. They also point to structural obstacles impeding a take-off of private sector-led growth, from bureaucracy to concerns about fair competition.

But these are not pressing concerns for yield-hungry investors after a quick profit. “In the short term investors worry about political stability, the exchange rate and questions such as what relation will the government have with the IMF after November when the current programme has expired,” says David Cowan, Africa economist at Citibank.

Longer-term investors, he adds, are more likely to be worried about the country’s overall debt level and ability to service it.

As interest rates are pared back, analysts expect more investors to move out of the carry trade into longer-term instruments.

Mr Soussa says the $20bn held by foreigners includes up to $5bn in longer-maturity bonds — something that was not the case in January 2018. “As rate terms come down and the pound strengthens, the carry trade becomes less lucrative. But investors are not leaving Egypt. They are buying long-term bonds to take advantage of the potential for further rate cuts,” he says.

Mr Soussa says the advantage for longer-term investors is that as yields fall, the value of their bonds rise so they do not need to hold them to maturity and can make a profit on selling their holdings. Yet once this play on rate cuts comes to an end, he adds, “you get less interest from buyers, so the sustainability of these flows becomes questionable”.

Unwilling to lock itself into paying high rates on long-term bonds, Egypt has focused more on issuing treasury bills. But as inflation and interest rates fall, officials say they want to extend maturities and change the profile of the country’s debt.

Mohamed Maait, the finance minister, told Bloomberg in early October that Egypt would raise the share of longer-dated debt to 40 per cent of its annual domestic issuance by the end of the current fiscal year, up from 5 per cent in the year ending June 2018.

“In a world of zero interest rates, at which point will Egyptian debt stop being attractive?” says Mr Cowan. “We suspect only when yields fall to single digits will investors have to start weighing up the costs and benefits more carefully.”

Get alerts on Egypt when a new story is published 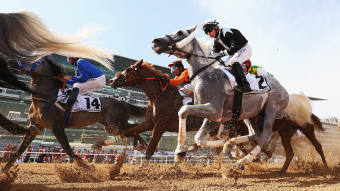