From her fashion to his furniture, the creative efforts of Emily Adams Bode and her husband Aaron Aujla are totally entwined

If there’s one object that encapsulates the fertile creative exchange between wife-and-husband designers Emily Adams Bode and Aaron Aujla, it’s the sofa that sits in the living room of their apartment in New York’s Chinatown. Like almost everything in the space, it’s been co-crafted by Green River Project, the furniture and interior design studio that Aujla founded with Ben Bloomstein in 2017, and Adams Bode’s cult eponymous menswear label (pronounced boh-dee). While the seat’s blocky frame is made from the same Douglas fir and African mahogany that clad the walls – cleverly transforming the interior from an anonymous white box into a place of warmth and permanence – its corduroy cover now layered with Bode textiles draws from those featured in Bode’s AW19 collection.

“For us, there’s no distinction between our work and our hobbies. Our relationship has always involved the things that we love doing, and our love for craft,” Aujla says. Nowhere is that more evident than in their shared Manhattan home. Filled with their hand-forged and found creations – from the oversize black-cherrywood dining table to the inherited clover lace tablecloths that Adams Bode repurposed as curtains – the interior is a microcosm of the collaborative nature of their design empires.

It also represents two people who have grown together both personally and creatively. The pair met at a party at Adams Bode’s apartment in 2009; back then, she was studying at Parsons School of Design, while Aujla was working as an assistant to the artist Nate Lowman. It was Adams Bode who suggested that Bloomstein and Aujla should turn their focus from fine art to furniture and interiors. Taking its name from the tributary that runs through Bloomstein’s family farm in upstate New York, Green River Project quickly gained a following for its raw, artist-made aesthetic. What began with kitting out their own homes and studios soon burgeoned. They sold pieces at The Row, and created interiors for a roster of clients including the playwright and actor Jeremy O Harris and the photographer Tyler Mitchell, with whom they also collaborated on the Grand Sofa that went on display at his solo show at The Gordon Parks Foundation last year. As both Bode and Green River Project have matured – they now employ 70 people between them – so their worlds have become more intimately entwined. As Aujla simply puts it: “We grew up together.”

When Bode became the first female designer to show at New York Fashion Week: Men’s, Aujla and Bloomstein built the mise-en-scène that staged her presentations. For spring 2019, Bode took a biographical deep dive into Aujla’s heritage, telling the story of his grandfather, who left India to settle in British Columbia in the 1920s, through handwoven Indian khadi cloth and Bengalese embroideries. The clothes were shown alongside a series of Green River Project designs including textile folding screens, lacquered bamboo chairs and a train car-style bench inspired by Satyajit Ray’s 1966 film Nayak. “All my collections revolve around personal narratives,” says Adams Bode. “That’s how she works,” adds Aujla. “It’s her vision of you.”

Green River Project is driven by the same impetus: to create interiors that are rich with personal histories. “That’s something that’s missing in the design world,” says Aujla. “People are interested in trends or what colours are in vogue, but they miss the point about trying to carve a place that’s meaningful to the person.”

This shared perspective is evident in their most ambitious joint enterprise to date: Bode’s sophomore store spanning 3,200sq ft of a former furniture gallery on Los Angeles’s Melrose Avenue. Designed by Green River Project, this is a space where personal narratives, memories and poignancies play out in forensic detail. Clothes are displayed in bespoke black-walnut cabinets – with handpainted signage created by Bode’s in-house illustrators – that borrow from the midcentury architecture of south Californian offices and institutions. There are hooked rugs, Aujla’s own naturalistic canvases and an elegant Argentinian chaise upholstered in a 20th-century woollen bed cover from Adams Bode’s fabric archive. Here, the fashion is treated with the kind of care and attention you’d expect of an heirloom destined for the Victoria & Albert Museum.

The starting point for this interior was a plastercast of a dodo bird. A symbol of the perils of overconsumption, it nods to the fact that Bode was born out of an ambition to both change the way men dress and to alter the wasteful culture around clothes. “I have always shopped vintage and had a love of antique textiles and ephemera,” Adams Bode says. Compelled by a desire to preserve the history and the craft techniques, such as appliqué, embroidery and patchwork, woven into these vintage textiles, Adams Bode began creating one-of-a-kind men’s clothes from upcycled and found fabrics dating from anywhere between the 1800s and the 1960s; she was harking back to a time when women stitched their own original garments in domestic interiors. As the business has grown, Bode has begun to incorporate reproductions of historical textiles (around a third of the collections remain one-offs). For Adams Bode, every thread offers anthropological insight. Each garment includes an instructive label detailing the provenance of the piece.

“Emily’s clothes are about education,” says Aujla. “So we wanted to create a space that would help tell stories about them.” Scattered among the quilted workwear jackets and patchwork trousers that have found favour with everyone, from architect John Pawson to musicians Tyler, The Creator and Harry Styles, are giant clam shells, fossils, model animal skeletons and a quartet of bird’s nests. On one wall is a cork board pinned with personal notes, postcards and mementoes that include their own wedding invitation. “After we’d finished the space I said to Emily that if we only made stores we’d be so happy,” says Aujla, confirming there are plans afoot for a third outpost in London.

HTSI
Jens and Emma Grede – the brains behind Skims 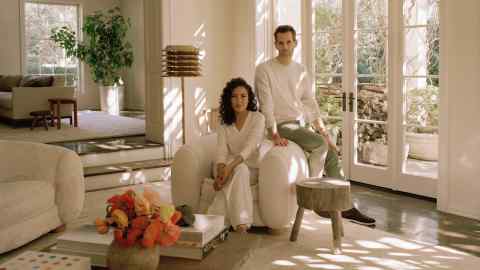 The same convivial spirit also runs through another of their recent co-productions: The River, a 75-seater tavern-style bar close to Bode’s flagship New York Hester Street store, which opened in April. While everything from the pine floors to the Connecticut ash pillars and furniture has been made, found or refurbished by Green River Project, the midnight satin jackets and white-trimmed dresses worn by the staff are created by Adams Bode, who has also topped the 25ft-long mahogany bar with turn-of-the-century textiles in deep green and brownish hues.

Theirs is a world where creativity and commerce coexist in a seamless manner. “Working together is just very fluid,” says Aujla. “I defer to Emily all the time, even on interior projects.” The feeling is mutual. “His is the only opinion that really matters to me,” Adams Bode says. Nothing is off limits. When Adams Bode and Aujla were married last September, the ceremony turned into a collection and lookbook shoot creatively directed by the bride and groom. “That’s just what we do,” says Aujla, who’s currently working on a project involving Adams Bode’s mother. “It’s our life – and each project rolls right into the next.”