Jens and Emma Grede – the brains behind Skims

The brand consultants turned creators have helped launch some of the world’s biggest labels. We find out how they kept up with the Kardashians

Where do advertising executives go to die? Most, of course, will likely be locked in client-pitch purgatory forever. Where they want to go – or rather, what they’d want to become – is, however, more certain: product owners, founders. Whether in sales, talent management, copy or design, the Don Drapers and Peggy Olsons of today all dream about the same thing: to be the creators, not just the creatives.

Which is precisely the realisation that Emma and Jens Grede came to. Rather than using their powers of innovation and persuasion to sell someone else’s hype bag, MoonSwatch, or Tesla truck, they wanted the same thing: love, matrimony and a decent slice of equity. Today, they run some of the world’s biggest fashion brands, alongside some of the world’s boldest personalities.

By far the biggest in their stable is Skims, the shapewear label co-founded with Kim Kardashian in 2019 and which is today valued at $3.2bn (Calvin Klein is currently valued at $1.5bn). The brand, which was this year named one of Time’s most influential companies, is like Spanx for Gen Z: a product designed for concealment and comfort that also accommodates a more diverse customer range and sells through a series of hyped-up “drops”, rather than seasonal collections.

Skims has forged numerous brand collaborations since its launch, including with Team USA at the last Olympics and Fendi designer Kim Jones, the latter generating more than $3mn in sales within the first 10 minutes of its launch. Its Series B fundraising round in January this year, led by Lone Pine Capital, climbed to $240mn.

The company is projecting more than $400mn in sales for 2022 and market suspicion is that the brand will go public. “At some point we will,” confirms Jens. “It deserves to become a public company and the beauty of it is that Kim [Kardashian] and I don’t have to decide that right now.”

I didn’t want to be just another Instagram activist or a fashion brand only talking about token ‘diversity’; I wanted to act”

Jens is a quiet, contemplative Swede, who once had ambitions of being a professional skateboarder. Instead, he and Erik Torstensson formed London-based marketing agency Saturday Group (now Wednesday Agency) in 2003, conjuring white-hot heat for stagnant consumer brands. Remember when Beyoncé sang on a sandy beach for H&M? Or the reason Natalie Portman signed as the face of Miss Dior and Gwyneth Paltrow for Hugo Boss fragrances? That was them. They also masterminded the original idea for ecommerce site Mr Porter (Torstensson’s partner is Net-a-Porter founder Natalie Massenet). Jens found true financial success, however, with Frame, the denim line he created with Torstensson in 2012, which garnered buzz with the help of model friends such as Karlie Kloss and Lara Stone.

Emma is, by contrast, a self-proclaimed “overly confident” Londoner, born to immigrant parents from Jamaica and Trinidad. She has a laugh that is klaxon-loud and exuberant energy that is about the best antidote to the stale, male and very pale personalities that have long reigned in corporate boardrooms.

After meeting Jens while working at Saturday Group, Emma’s own big success came as the CEO and founder of Good American, a jeans company she started with Khloe Kardashian in 2016 that made plus-size denim feel, well, cool. Emma used to bump into various members of the Kardashian clan during fashion week, although instead of scoffing at the idea of them being stylish – as so many of the fashion hierarchy did back then – she saw the potential of their bonkers reach and popularity. She pitched Good American first to Kris, the omnipresent Kardashian “momager”, before taking the idea directly to Khloé.

The pair live in the affluent LA neighbourhood of Bel Air, in an estate built in 1938 by Hollywood architect Paul R Williams, who designed houses for Frank Sinatra and Lucille Ball throughout his career. Filled with furniture by Charlotte Perriand and Philip Arctander, and art by Barbara Kruger and Alex Israel, the family home is a large, pale but very comfortable space with ample room for their children, eight-year-old son Grey and five-year-old daughter Lola, and twins, whom they welcomed by surrogate last October.

“I’ve always been obsessed with LA,” says Jens. “It’s at the global intersection where culture, technology and lifestyle meet. As a place, it very much defines how we live our lives and what products we all consume. It’s the birthplace of the creator economy. I’ve been waiting my whole life for the two things I care about most, culture and the consumer, to converge. And they have in LA. I don’t think we’ll ever leave.”

Emma’s call to America was slightly different: “I came with a mission. I didn’t want to be just another Instagram activist, or a fashion brand only talking about token ‘diversity’; I wanted to act. I realised the difference in narrative: compared to the UK at least, it’s much harder to be a black woman CEO in the States, and the opportunities just aren’t the same. I wanted to change that.”

Together, they’ve become the biggest influence on, if not the catwalk, then something far more tangible: everyday, American mass-consumer style. The genius of their business endeavours is in part due to their simplicity.

Skims’ products, for example, are minimalist, stretchy and, crucially, wearable. They are in contrast to the shapewear brands that came before them, which were either uncomfortable or designed for the male gaze. Katy Lubin, vice president of brand and communications at online marketplace Lyst, says Skims is a true category disrupter, “shifting the narrative around shapewear and reinvigorating the market. Skims’ products and its branding makes shapewear fun, comfy and special; it’s something you wear because you want to, not because you have to.”

“Most brands serve up the image of a woman that isn’t realistic; impossible dreams with a sprinkling of self-loathing,” says Emma, who is the chief product officer at Skims, as well as a founding partner. “Brands for the masses aren’t designed by creatives usually, they are done to perform to cost and by a bunch of suits in a meeting room with a load of revenue graphs on the wall,” says Emma.

For all its success, however, Skims launched with a huge public misstep: the brand started off as “Kimono”, appropriating the name from the Japanese garment of incredible cultural significance, presumably for the simple reason that it included “Kim” in the title. “I felt terrible at the time,” says Jens, “because we couldn’t understand how we’d been so tone deaf, but how we handled the fallout was one of the better moments of my career – we listened. We apologised. We acted. And the audience understood. It taught us about the two-way relationship with our audience, and that if you are transparent you don’t have to be perfect.”

This also highlights the challenges of working with celebrities, who are more often than not subject to intense public scrutiny. “There is an added complexity,” says Jens, “because you are working with the brand’s interests against the backdrop of other interests. I am lucky to work with people who trust me to do the job I do. I think all creative people should be willing to push the envelope and it’s my job to funnel that ambition into a vision with them and then to an audience. So I don’t think working with Kim Kardashian is different to working with any other great creative director.”

Whoever you are working for, you have to believe in the strength of what you’re creating. Fame, of course, is a great accelerator”

Jens also helped Tom Brady – the David Beckham of American football and Gisele Bündchen’s husband – launch his own apparel line. “It took around five years with Tom, from the initial conversations to the product development. It’s no longer enough to just make a great product; you need a point of view. These people all come with incredible, unique storytelling. But whoever you are working for, you have to believe in the strength of what you are creating. Fame, of course, is a great accelerator.”

What Skims and Brady have in common, Jens enthuses, is that, like all great American brands, both were born in an era of disruption to distribution. “Talk about fast fashion and what occurs at the same time is the boom of the American mall. If we’re talking about the likes of Warby Parker and Net-a-Porter [which both launched as online-only retailers], and the first era of DTC [direct to consumer] our brands are built in the creator economy. The new distribution models have allowed us to create these businesses.”

Loyalty is a big pillar in such businesses; if you don’t have a product that delivers, and you charge more for it, customers won’t return. As Emma says: “Good American wanted to put the image, style and fit at the forefront of such everyday clothes, clothes that would actually fit the majority of women in America. Even from the beginning we were very clear and very determined to deliver just this.” Unsurprisingly it’s working: Good American is expected to exceed $200mn in sales in 2022, up 70 per cent year-on-year.

Why don’t more fashion labels cater for larger sizes? “The system is broken,” adds Emma. “I wanted to take advantage of a system that didn’t cater to the majority of customers; I saw an opportunity, both to make an inclusive denim brand that was aesthetically pleasing but also to put my middle finger up at the establishment. I have enjoyed doing both, believe me.”

How To Spend ItThe men’s style issue: spring 2022
Birkenstock: inside a $5bn brand 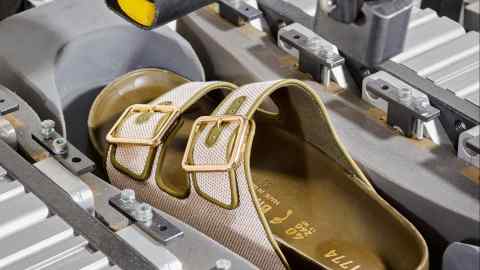 As Emma’s brand grows, so too does her profile; recently she’s been a guest judge on Shark Tank, the American version of Dragons’ Den. How does her rising star impact her own business demands? “Honestly, I wanted to ‘pay it forward’, as they say in LA. It sounds corny but we have made some money now, and to be able to pass on what I have learnt in the seven or eight years of Good American and Skims was crucial. It was only yesterday that I was going around looking for financial backing myself.”

Successful, proud and unapologetic. It’s little wonder Emma fits in with the light, cameras and deal-makers of LA. In fact, it makes one think that other British brands could benefit from a little more self-belief, a little more of a desire to go for one’s moonshot, rather than always playing the humble creator card.

I ask Emma whether her time in America has changed her? “I don’t think I have changed at all. We don’t have yearbooks in England, but I feel like if we had a yearbook, I would have been, ‘Most likely to succeed.’ I’m still that person: pretty tough but not an asshole. A new way of doing business, for the next generation of business titans.”