The monochromatic majesty of Joël Andrianomearisoa

The artist on Madagascar, white shirts and Lucky Strikes – his “only vice”

My personal style signifier is all-black clothes. Now and then, I wear white – especially shirts by Comme des Garçons, and I like white underwear. When I was 18 and first arrived in Paris, the black aesthetic was a way of being part of the game of art and fashion, even though I was still a student. Wearing black is the same as using black in my tapestries and textiles: it’s a perpetual exercise in how to deal with it. You need to go more deeply into the details, look at textures, find the perfect cut or accessory to make it interesting. I like black Ann Demeulemeester, Dior and shoes by JM Weston. Adidas often does something fun too.

The last thing I bought and loved was something big – a house in Antananarivo, Madagascar, with my partner. When I saw the place I fell in love immediately – it’s a traditional house in a historic location in Antananarivo, near the Queen’s Palace. For years I’ve dreamt about renovating a whole house and I intend to design as much of it as I can, so that every object will build a story and reflect a memory or a place – a bit like the Bauhaus idea of a Gesamtkunstwerk.

The places that mean a lot to me are Antananarivo, because it’s my birthplace, my hometown and I still have one foot there and half my heart; Paris, where I live and produce and have many connections; and my house in La Creuse near Aubusson, in the French countryside, where I work on my big installations. In the trilogy, La Creuse plays the part of silence and emptiness.

And the best souvenir I’ve brought home is some tea towels I found in the gift shop of Cape Town’s Zeitz Museum of Contemporary Art, where I’m going to install a huge site-specific installation in July. The tea towels are designed by William Kentridge – I love the fact he is one of the most expensive artists in the world, but here in the shop are these simple textiles, white cotton with his drawings printed in black. From £28.80, zeitzmocaa.museum

The best book I’ve read in the past year is Ecrit la nuit: le livre interdit by legendary architect Ettore Sottsass. This is a book that I’ve given a lot of time to, that I still travel with and re-read often. It reveals his thoughts about life, his personal struggles, and why he prefers to work and find inspiration at night – as I do.

People say they have green fingers, but mine are black

My style icon is the character Tadzio from the film Death in Venice. He is perfect: he’s described as the most beautiful boy in the world – everyone dreams about him. The hair, the white shirts, the way he wears the jacket. I’m also influenced by one of my best friends, Nathalie Rosticher, who is based in Monaco and who I’ve known for more than 20 years. She is someone I shop with and we have animated discussions about fashion. When she travels she prepares for each event with deep reflection on the details, which is why I love her.

The work that changed everything for me was the poetry of Malagasy writer Jean-Joseph Rabearivelo, especially his collection of poems, Presques Songes. I first read them 20 years ago and they changed my vision and approach to my work. He wrote poetry during the French colonisation in the 1920s, in both French and Malagasy, on themes of desire and dreams. He had a nostalgic way of writing about the Malagasy philosophy; very emotive.

In my fridge you’ll always find one bottle of champagne – for guests, of course. My home in Paris doesn’t really have a fridge, it’s more like a hotel minibar, so that’s all there is space for. I don’t have one in Madagascar either – there are sometimes issues with electricity, so I prefer to buy things day by day. I don’t like cold things – it is better anyway to eat and drink things that are at body temperature.

The best gift I’ve given recently is some notebooks I made with Moleskine, to some people very dear to me. There were only 3,000 editions, and they were only available in Le Bon Marché and the Moleskine shop in Paris. It’s a classic black with a hardcover and text in my handwriting printed in French on the front. It comes in a box, with the same text in black, so it can be used as a notebook or kept as an artwork – I always enjoy this duality between a piece of art and an object. Le Bon Marché, 24 Rue de Sèvres, 75007 Paris

And the best gift I’ve received is a silk Yves Saint Laurent brooch with a single white flower, from my partner Alexandre. It was a reference to my work with flowers, such as in my installation at the Palais de Tokyo. I collect them from all over the world, and they’re usually all black. I love the idea that you have a special relationship with a brooch; it’s not like a bracelet or a necklace – you wear it right by your heart.

I’ve recently rediscovered Converse. I bought some last weekend – in black and white of course – and I’m still wearing them three days later. I haven’t worn them since I was a teenager. It’s like meeting an old flame.

The thing I couldn’t do without is cigarettes. It’s the only vice I have now. I started smoking at 25 and I smoke a pack of Lucky Strikes a day. In the beginning it wasn’t about taste or addiction, it was the cinematographic image of smoking – I have a beautiful memory of going to the cinema with my parents in Madagascar and seeing the smoke from everyone’s cigarettes through the light of the projection. Also, the Lucky Strike logo is designed by Raymond Loewy, one of the best designers in the world.

The last item of clothing I added to my wardrobe is a white shirt from Dior. It is an interesting colour and at first it looks very normal, but the collar folds like a scarf. I don’t have a favourite brand but I am a friend of the house, and I’ve collaborated with them on a few things over the years – I redesigned the mythical Lady Dior handbag with them in 2020, and I created a huge installation for their show at the M7 museum in Doha. 30 Avenue Montaigne, 75008 Paris

An object I would never part with is a steamer – I can’t do without one as I can’t iron, I’m very bad at it. I do love how an iron can change everything and make things appear perfect, so I will also send things to be pressed.

I have a collection of plates. I’ve collected them for 20 years. I never buy the whole service, only the plates. I recently purchased 50 unique plates from Limoges. But I also have less expensive brands, including handmade plates I bought on a trip to Cotonou, Benin, four years ago; and some artist editions by Jean Cocteau and Sarkis. I have six dessert plates from the Ministry for Europe and Foreign Affairs in France, from hotels I have stayed in; and I have a set of polished white porcelain plates from the 1950s that I found in Madagascar.

The grooming staple I’m never without is skincare by La Roche-Posay, because it’s simple and available in every pharmacy. But I also really like cactus oil from Madagascar for keeping my skin hydrated. And I’ll often make a turmeric face mask by mixing the powder with water and leaving it on for 15 minutes. I love it for the skin colour I have. But don’t sleep with it on, it’ll ruin your bed linen! In terms of perfume, I have two favourites: Diptyque’s L’Autre, which has a peppery smell, and Dior’s Eau Noire, which is also smoked – neither are easy to wear. diptyqueparis.com

My favourite room in my house is the dining room: it’s where I organise dinners and where I work. I like to have a big table. It’s a place where you can do many things at the same time, where the mood can change, where two or 20 can gather, where you can have discussions, and become creative. In my house in Paris I have a very heavy 2m-long table that I designed myself.

My favourite building is Peter Zumthor’s spa in Vals. I dream of going there one day, in winter when there is a lot of snow. The concrete, the water, the darkness, the fact you can swim alone – I like the way Zumthor approaches volumes and textures. 7132.com/en/therme/thermal-baths-and-spa

My grooming guru is hairdresser Mathieu Séguier, who I see every month. He’s in the 7th arrondissement. You have to book three weeks ahead and it’s very intimate – there are only two people in there at a time.

In another life, I would have been a florist – I’d love to understand the technical aspect of it. People say they have green fingers, but mine are black! I would love to understand not just the aesthetic of putting flowers together but the quantities of water, how to become really good at it. I love the florist Pierre Kavaciuk in the 14th arrondissement, it’s a special place, very lovely. 44 Boulevard Arago, 75013 Paris

Inspiration can happen everywhere, at any time – it can come from the taste of a carrot, from the specific packaging of a cosmetic, the cover of a book – suddenly something will appear. There’s no precise moment or formula – working is a permanent state for me. As an artist, you have to be aware of everything – it’s not so much part of the job as a kind of condition.

FT SeriesThe HTSI spring design special 2022
Kengo Kuma: ‘I am not attached to objects at all’ 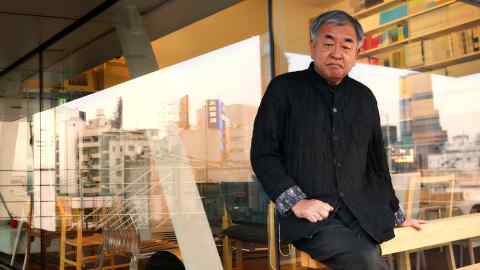 The last music I downloaded was a song we listen to every day at the studio, “Il Cielo in Una Stanza” by the Italian singer Mina, recorded in 1969. It has this melancholic melody, and the lyrics speak of the feeling of being in love and the walls becoming a forest and the ceiling turning into a sky… I love the image and the idea of emotional elements becoming a physical architecture.

The podcast I’m listening to is France Culture’s critiques of current cultural events – talking about exhibitions, music, theatre and dance. The French have this particular way of talking critically about culture, with a lot of references that can be fascinating in their own right. franceculture.fr/art-et-creation

My favourite app is Yuka, which allows you to scan food and cosmetics and find out how healthy they are. I also use weather apps constantly – I’ll check the weather about ten times before I travel anywhere.