Asia’s emergence as a centre for business education echoes the rise of China, Singapore and India as global economic powers.

The reason is not just that there are more potential applicants with the money and ambition to take a business masters degree. There are now numerous multinational companies in the region, such as homegrown tech business Alibaba, looking to hire them.

Asian business schools might be younger than their American and European counterparts, but they are establishing themselves quickly and the market is proving resilient compared with other regions.

Growth in applications to study on MBA programmes at Asian business schools outpaced the rest of the world for the second consecutive year in 2019, according to research by the entrance exam administrator, the Graduate Management Admission Council (GMAC).

This defies the global picture in which applications to business schools were down 3.1 per cent year-on-year in 2019. It is also particularly marked against the sharp declines in the US, the world’s largest market for MBAs.

This growth was driven in part by strong interest from students in the region. Nearly half (48 per cent) of Asian business schools reported growth in domestic applications this year.

We are going back to the 18th century, where leaders only understood their own situation

He adds that creeping nationalism among governments in Asia, notably China, which has warned its citizens to be careful when considering studying in the US, could also be to blame.

This is a worrying trend, Mr Chowfla adds, as it makes business education in the US less diverse. Having a variety of students who bring different insights to classroom discussions is considered key to teaching subjects such as leadership and strategy.

“We are going back to the 18th century, where leaders only understood their own situation,” Mr Chowfla says.

Asian business schools, on the other hand, are attracting more interest from overseas students, says Lawrence Linker, founder of MBA Link in Singapore. The admissions consultancy was originally set up to help Asian students seeking to study in the US and Europe, but Mr Linker says he now receives a significant volume of inquiries from people looking to move in the other direction.

“A few decades ago, a western business professional might take an international assignment, often in Asia, as a way to gain more responsibility and level up quickly before returning home,” Mr Linker says.

“But we’re seeing more young western professionals applying to schools in Asia to place themselves in that environment rather than hope for an opportunity from their employer.”

Some Asian business schools are also more diverse than their counterparts in the US in terms of gender. While there is much variation between countries, in China for example, 73 per cent of GMAC respondents reported higher demand from women this year, and women accounted for 51 per cent of all applications to the country’s schools.

In the US, only 31 per cent of GMAC respondents reported higher demand from women this year and women accounted for 39 per cent of all applicants to the country’s schools. 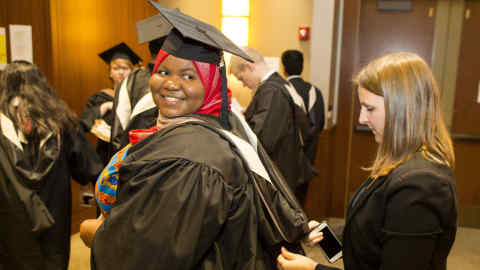 Although the Asian schools are rising up the rankings, there were only 15 in the Financial Times global MBA list this year, including Insead’s Asian campus, plus a further three in Australia. This suggests that students who are considering only the top institutions are still more likely to choose courses in the US and Europe.

That may be down to how established these institutions are. Even the top Asian schools are relatively new compared with US and European business schools — Hong Kong University of Science and Technology, for instance, was established only in 1991. Insead, Europe’s premier business school, was founded in 1957.

That said, Asian institutions are maturing much faster than their American or European peers, according to Andrew Crisp, co-founder of Carrington Crisp, an education consultancy. “I suspect Harvard didn’t have [as] strong an international cohort as HKUST in its first 30 years,” he says.

The ultimate deciding factor for those considering any school, however, is future employment prospects, says Mr Crisp.

“Even though the Chinese economy has slowed, its growth is still more rapid than developed economies and hence the opportunities are growing more quickly,” he adds.

European and American MBA students are enthusiastic about these opportunities too, says Mr Crisp. He recalls a focus group Carrington Crisp conducted with European students about studying in Asia in 2004. A German student, asked why he studied in Singapore, said “because the future is Asia and Singapore is a safe place to study”.

Mr Crisp notes: “It feels to me that if this was true 15 years ago, the number of places it might apply to in Asia today has multiplied enormously.”