Emma Boyde in Hong Kong and Stefania Palma in Singapore

Hong Kong and Singapore have been rivals for decades in many sectors but until recently business education was not one of them, mainly because the schools’ geographical locations offer different advantages to students.

However, with the Hong Kong protests showing no sign of abating and as marketing starts in earnest for the September 2020 intake of MBA candidates, there is a risk that more students will compare the two and opt for Singapore.

“If the situation does not improve, I would not be surprised if it had a negative effect,” says Kalok Chan, former dean and professor of finance at the Chinese University of Hong Kong (CUHK) Business School.

Students may be put off applying to Hong Kong schools because of the protests but, so far, it is too early to tell, he says. Advertising and promotions begin in the autumn and applications are accepted until spring.

The problem, as business school recruitment services know, is that some students already look at schools across Asia early on in their decision-making — and they were making comparisons even before Hong Kong’s political crisis erupted. 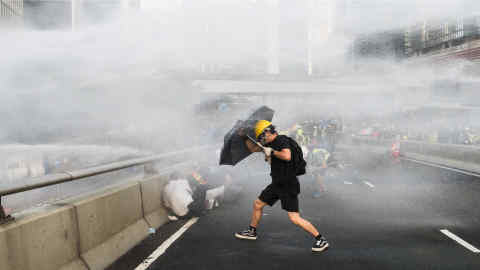 “I visited Hong Kong, Taipei and Singapore when evaluating schools in Asia for my MBA,” says William Akers, a US alumnus from the class of 2010-11 at Hong Kong university (HKU) business school.

Ling Kong, an MBA student from the UK, also considered some institutions in Singapore before settling on the Hong Kong University of Science and Technology Business School.

Discounting the current risk of being in Hong Kong — where protesters have set fire to metro stations and police have responded with tear gas — few would dispute that the cities offer different opportunities.

For David Grey, a British student on the MBA programme at HKU, there was no contest between the locations: he wanted exposure to mainland China.

“Hong Kong was the natural choice because of its proximity to the mainland, international outlook and well-respected business schools,” he says.

Nevertheless, Sia Siew Kien, associate dean of graduate studies at Nanyang Business School in Singapore, says the political situation in Hong Kong may affect the sentiment of prospective students in the short-term, particularly for those applying from mainland China.

The impact on day-to-day life is actually quite minimal, despite what it might look like in the international press

The Hong Kong protesters have grown increasingly anti-Beijing in their demands for greater democracy and there have been isolated incidents of racism against people from mainland China. Many visitors and residents who speak Mandarin say they feel uncomfortable and fear a backlash from Cantonese-speaking Hong Kong locals.

Hong Kong’s elite schools are more exposed than those in Singapore to a possible downturn in the number of applicants from mainland China. About half the students on CUHK’s full-time MBA are from mainland China, says Prof Chan, who has just come to the end of his tenure at the helm of the business school. HKU reports that about 35 per cent of this year’s MBA intake declare their nationality as mainland Chinese, while the figure for HKUST is nearly 30 per cent for those on the full-time MBA course.

Singapore schools, in contrast, report much lower reliance on mainland Chinese students. Insead’s Asia campus says that about 8 per cent of those studying on the current MBA programme are from mainland China, although this figure fluctuates. Prof Wirtz says the proportion at NUS is slightly over 15 per cent.

Despite widespread international news coverage of the Hong Kong protests, current students and academics point out that the violence is easy to avoid and there has been little or no unrest on business school campuses.

“I would say the impact on day-to-day life is actually quite minimal, despite what it might look like in the international press. Generally, protest organisers distribute locations and timings in advance and it is relatively easy to avoid the areas where protests are happening,” says Mr Grey.

“Hong Kong in general is a very safe city and I have never felt endangered despite the tension in the past few months,” he adds.

“In terms of safety, there’s not much of a problem. The riots are very localised,” agrees CUHK’s Prof Chan.

He warns, however: “If the protests continue it will affect business and therefore job opportunities.”

Some multinationals are said to be drawing up plans to relocate to Singapore or other cities if the protests do not die down, prompted in part by concern over staff recruitment and retention.

Business schools will not be immune to such difficulties and, as Prof Wirtz points out, the real rivalry between business schools is for the best staff. “Competition is more intense for world-class faculty than for MBA candidates,” he says.

“Hopefully the situation will get better,” says Prof Chan. Business schools in Hong Kong, which will be acutely aware of the problem, will be thinking along the same lines.

Video: Why Hong Kong protests and violence are escalating