Laurence Fletcher in London and Hudson Lockett in Hong Kong

A small cluster of hedge funds managed by women has outperformed those run by men through the coronavirus crisis, new data show, highlighting the industry’s long-running lack of progress in fixing its gender imbalance.

Hedge funds run by women lost 3.5 per cent in the first four months of this year, as measured by Chicago-based data group HFR’s Women Access index. That beat a 5.5 per cent fall in its HFRI 500 Fund Weighted index, a broader measure of performance that incorporates both men and women-run funds.

“In the round [female managers] appear to have a better approach to managing risk,” said Russell Barlow, global head of alternative investment strategies at investment firm Aberdeen Standard.

While there were examples of very good and poor performance from both men and women-run hedge funds, “the data suggests that there is just a far higher proportion of ‘average’ male-run hedge funds than female”, Mr Barlow added.

The outperformance comes as the $3tn industry faces up to an extreme gender imbalance that is changing only gradually.

Fifty years after the UK’s 1970 Equal Pay Act, the proportion of women working in hedge funds, at 18.8 per cent, is the second-lowest across seven alternative asset classes that also include private equity and venture capital, according to a study by data group Preqin, and has only increased marginally since 2017. And despite a wave of female-led hedge fund launches in recent years, the proportion of women in senior hedge fund roles has fallen marginally to 10.9 per cent.

Why women have performed better this year is unclear, as is whether this is a one-off event or a longer-term trend. Some industry insiders suggest female managers proved more adept at avoiding losses when developed stock markets began to tumble at the end of February — a notion in keeping with studies on how women perform in risk-management roles. Aberdeen Standard’s Mr Barlow, for instance, described limiting losses as “a key attribute that the female managers have been able to deliver”.

That appears to be backed up by the data. Women-run funds posted smaller losses in both February and March’s equity market sell-offs, with March delivering the biggest margin of outperformance of the broader index since the Women Access index was launched in October.

“In discretionary trading, perhaps men put ego before rationale more,” said Irene Perdomo, former co-founder of hedge fund Devet Capital and now managing director for systematic macro strategies at Gresham Investment Management in London. “Women might be more risk-averse, they could be more cautious about risk management than men — that intuitively makes sense to me.”

“Because we're a minority and because we're not part of the boys’ club I think we tend to be a bit more unconventional in our approach,” added Ms Hsiao, whose Asia credit-focused fund chalked up a gain of 4.25 per cent in April.

Aberdeen Standard estimates that 1 per cent of hedge fund assets are run by women, which it believes is a large enough sample size to represent a broad range of hedge fund strategies. But others disagree.

Leda Braga, founder and chief executive of hedge fund Systematica Investments, and one of the hedge fund industry’s highest-profile female executives, believes there are not enough women running hedge funds to provide enough data to analyse.

HFR’s Women Access index covers 25 funds with $13.2bn in assets. It has roughly similar weightings to major hedge fund strategies as the broader HFRI 500 index, although there is a lower exposure to macro trading, which actually performed much better than hedge funds overall this year, and greater exposure to equity strategies, which have underperformed. A broader HFRI Women index also outperformed HFR’s widest measure of hedge fund returns.

The barriers to entry to women, either in the hedge fund industry itself or in university courses such as mathematics and engineering that can lead to hedge fund jobs, may mean that women who progress to run money are on average better than their male counterparts.

For a woman to be promoted or to have a comparable career trajectory to a man is “unfortunately often more difficult”, said Aberdeen’s Mr Barlow. “Therefore a woman might have had to work harder or show more skill than the average [man] in that role to succeed.”

If there are barriers to entry, they may “work as a filter” for female managers, said Systematica’s Ms Braga, whose BlueTrend fund is up about 10 per cent this year. “Your vocation and passion in pursuing [a career] needs to be more intense if the starting conditions are against you.”

Gresham’s Ms Perdomo said that opportunities in the industry were now more equal than in the past. About a decade ago when she tried to move from quantitative structuring at a bank into trading, she applied for 10 jobs over the course of a year but did not get a single interview. After a year and half she finally got an interview and got the job. “I'm very stubborn, I didn't let the 10 get me down,” she said.

Triada Capital’s Ms Hsiao concurs. “We definitely have to go through a lot more to even get where we are,” she said. “We have to be a lot more versatile.”

Explore the series
READ MORECoronavirus: free to read
Brazil’s chloroquine battles: ‘They were saying they were going to kill me’ 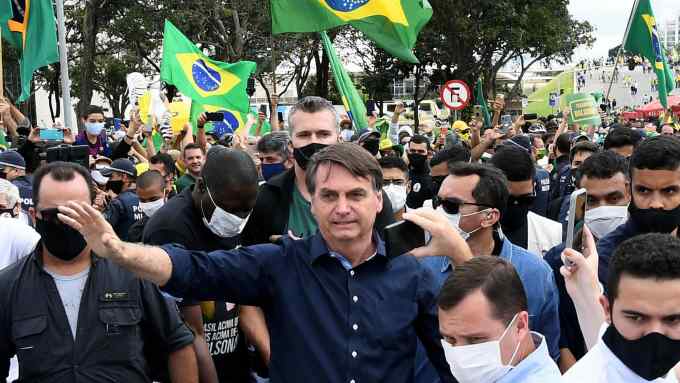