It is an unusual location for a garden museum: an abandoned church by a busy roundabout, with the MI5 security service and the Palace of Westminster peeping over from across the Thames. The museum in Lambeth sits between some of London’s wealthiest and most deprived neighbourhoods. Here, in this land of green, this country where the country house became a fetish and the suburban semi its mass-market sibling, with its obsession with parks, gardens and romantic landscapes, the institution devoted to gardening is smack in the heart of the city on a site paved over with asphalt and tombstones.

Yet where else would it be? “London is a green city if you’re rich but a grey city if you’re poor,” says Christopher Woodward, the mus­eum’s director. “The reason for having it in the middle of this noisy, dirty, grey city is that two-thirds of Londoners don’t have gardens of their own.”

Founded in 1977 by John and Rosemary Nicholson, who saved St Mary-at-Lambeth Church from being levelled to become a coach park, the Garden Museum has developed into one of the city’s quirkiest and liveliest public institutions. And it is about to enter a new phase in which the once gravestone-paved, walled-in yard is becoming a flourishing, green and open garden.

It is difficult to imagine amid the traffic fumes, but this was once a very green place indeed. Vauxhall Gardens, the most famous and most luxurious of Europe’s pleasure parks, was round the corner and so was the garden of John Tradescant (c1570-1638) the polymath collector, traveller and horticulturalist. Tradescant’s tomb is here, a fantastical slab carved with fabulous beasts, memento mori and a small crocodile. Tradescant’s eclectic collection went to another gardener and occultist, Elias Ashmole (whose tomb is also here) and became one of the foundations of Oxford’s Ashmolean Museum in 1683.

The inspiration for that carving will also be returning from the Ashmolean, the small stuffed crocodile that will become the centrepiece of a reconstructed cabinet of curiosities, the “Tradescant Ark”. That vitrine-encased room is, in its own way, a microcosm of the museum, which is its own kind of cabinet of curiosities. There are historic gardening tools (including oddities such as a glass cucumber straightener and, my favourite, a tin of Slug Death powder) and landscape drawings, garden sheds and certificates for prize vegetables — all contained within a church dotted with memorial slabs, stone reliefs and stained glass.

The project is a fine example of what can be achieved when a museum director, in this case Woodward, and an architect, Biba Dow and Alun Jones, develop an empathy over years of collaboration exploring the exigencies and character of a particular place. London-based Dow Jones was selected in 2007 and designed a budget intervention (this is not a wealthy institution; the entire works cost £7.5m).

Ingeniously, it uses cross-laminated timber to insert a secondary structure into the body of the church, weaving walkways and stairs between arches and arcades and creating at the building’s heart what Jones describes as a “kind of piazza, a central public space”. That space (now with underfloor heating, transforming what was once as chilly as a garden shed) is now overlooked by the exhibition spaces, the Tradescant Ark, the stairs and first-floor galleries, creating a sense of urban intensity and interest.

There has been a doubling of gallery space at the museum and a hyper-inflation of displays from 180 objects to 1,200, now all in the same building. Added to this is a new archive of garden design, something that, perhaps surprisingly in a country in thrall to gardens, didn’t exist before. The collection includes the archives of Beth Chatto, John Brookes and Penelope Hobhouse, as well as works by Geoffrey Jellicoe, Gertrude Jekyll and Charles Jencks. It is a collection that spans grand country houses and council estates (with Janet Jack’s landscape designs for the wonderful Alexandra Road Estate in Camden) in a deliberate riposte to the idea of the grand garden as an elitist concern. There are garden gnomes and people reminiscing about their sheds.

That crowded overlaying of history, architecture, popular culture and exhibits in the old church is exactly what makes the release of the new outdoor spaces so marked. There are two new gardens. The first at the front is by Christopher Bradley-Hole (to be completed in the summer), a formal garden of hedges and paths to gently introduce the public to the building. The second is behind the church and is intended to become the museum’s social centre.

Surrounding the old churchyard and centred on Tradescant’s curious tomb, the new garden is defined by three bronze-clad pavilions connected by a cloister. The first is occupied by a “garden classroom” aimed at schoolchildren during the day and accommodating lectures for a grown-up audience in the evenings. “So many children around here have never held a plant or even seen a worm,” Woodward tells me. “You can only learn about plants from your fingertips — you need to smell them and feel them.” The second pavilion is occupied by another, more intimate study space and the third is a café open to the public as well as visitors and with direct access to the street.

The whole thing is bound together by a Dan Pearson garden at its centre, designed as a place to stimulate the senses with fragrant flowers and spicy-scented plants. Surrounded by the glassed-in cloister, it is, as Woodward delightfully describes it, “a cabinet of plants”, an organic counterpoint to the long-dead artefacts in the museum.

The planting is informal and rich, with scents and colours emerging as the months move on. In May and June, Pearson writes, “the small yellow flowers of the Elaeagnus emit an intoxicating perfume reminiscent of cinnamon and clove, the Dianthus has a pure clove scent in June and July, while the foliage of the Salvia smells of sage and mint, and flowers until the first frosts”.

Alun Jones of Dow Jones compares the tessellated bronze cladding tiles (in a “T” shape) which frame the garden — and do so much to define the new institution’s appearance from the street — as being “inspired by the bark of a plane tree, so typical of London” (while the geometric “T”, apparently, hints at Tradescant’s legacy). The architecture is intriguing and a little unpredictable. Inside the church the chunky timber structures create their own language — plain, bleached, unassuming — forming an almost puritan meander between the intricate Victorian gothic arches, carefully separate, always keeping a little distance from the stonework so that the changes remain reversible.

Outside, the bronze is bold but the cloisters are delicate and the walls are clear, giving views from the street, from the top decks of buses and from the interior, including at night when the gardens will be gently illuminated. There is a sense of theatricality throughout, just as there is in the best gardens, with the meticulously layered spaces revealing themselves as you move through and always leaving a tantalising glimpse of something intriguing to come. It makes the place appear bigger and more complex than it actually is.

Gardens are a long-term project. They embody time but they also represent the miracle of rebirth and regeneration. This curious little museum is a kind of architectural equivalent, a defunct but beautiful building resurrected as a place of learning, delight and social interaction. The memorial slabs that line the floors and walls and the tombs of Ashmole and Tradescant (as well as William Bligh of mutiny on the Bounty fame) testify to the way in which death can catalyse new life.

In Tradescant’s Ark, a sheet of glass set into the floor reveals a staircase descending into the darkness. It leads to a vault, discovered during construction, in which up to five archbishops of Canterbury are interred. The discovery led to an explosion of media interest — tombs seem somehow irresistible. The lead coffins will, however, continue to lie undisturbed. This is a museum built on the ghosts of the past, the idea of history as inspiration and the notion that nature will take everything back, eventually.

John Tradescant’s communion dish, William Robinson’s cloak, Gertrude Jekyll’s desk: to garden enthusiasts, these are precious relics, writes Neville Hawcock. Where better to house them than in a church? Whether they can work miracles is a different matter. I was tempted to touch the desk, unprotected by a display case, but my museum manners are unbending. Plus, it’s doubtful that even supernatural intercession could tame my borders.

Most of the exhibits are less exalted. The tools are straight out of the darkest recesses of Grandad’s shed, their wooden handles darkened with decades of dirt, sweat and 3-In-One oil. Some are familiar — there are only so many ways to refine a spade — others less so: dead ends in the evolution of garden technology. Spong’s garden hedge trimmer, its multiple blades arranged in a semi-circle, was surely less of a labour-saver than Spong envisaged.

But it’s the promise that counts. Among the lovely memorabilia here are many products and adverts offering easier gardening. The woman pushing the Ransomes Ajax lawnmower steps across a lime-green sward as easily as if the thing weighed nothing; the family on The Woolworth Gardener pamphlet (“A guide to successful gardening for all”) look at each other happily on a perfectly striped lawn, a trug of immaculate produce beside them, a cloudless sky above. No weeds, no pests; you can’t see the soil but it has to be that chimera of gardening manuals, the fine tilth.

Yet I fall for it every time. I loved the art nouveau seed-packet display — Yates Reliable Seeds — with its images of luscious produce, including burstingly plump radish “French Breakfast”. Have mine ever looked as good? Of course not. Do I think that this year things might just be different? I wouldn’t garden if I didn’t. 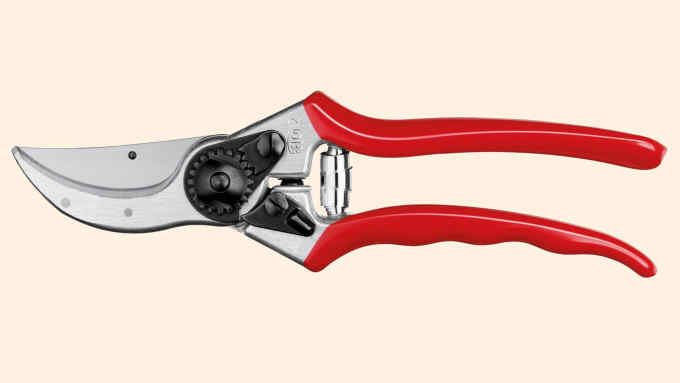