Online lending: US fintechs gain from behaving more like banks

When Noah Breslow rang the opening bell at the New York Stock Exchange in the week before Christmas 2014, it was a high point — perhaps the high point — for the fledgling online lending industry.

The company he ran, OnDeck, had grown rapidly in the years after the financial crisis by supplying quick and fuss-free credit to small businesses over the internet.

By then hundreds of similar online platforms had sprung up, trying to bypass Main Street lenders like Chase and Bank of America, which were grappling with a whole host of tougher regulations brought in after the 2008 collapse of Lehman Brothers.

Much of the excitement has evaporated. Rising delinquencies on some classes of loans and a governance scandal at Lending Club have given the entire industry a rough ride.

Talk of putting big brick-and-mortar lenders like Citibank and Bank of America out of business has turned to working with them, providing ready-made parcels of loans the banks can hold, while supplying software so that banks can originate loans to their existing customers more efficiently.

Meanwhile, most of the platforms have slashed sales teams, while increasing staff in their compliance and legal departments, as regulators have begun to pay more attention to the potential threats the platforms pose to financial stability.

Mr Breslow, a fast-talking Bostonian, says the entire online lending industry is better, and more durable, for that humbling experience. OnDeck itself has made money for its shareholders in three of the last four quarters, and has seen its shares more than double since a trough in May last year.

“2015 to 2017 was a pretty interesting time,” says the 43-year-old chief executive, from OnDeck’s headquarters on Broadway in New York. “But we made some aggressive changes.”

Tech-focused investors were primed for rapid revenue growth, and when it failed to materialise, they sold the stock.

Key to the turnround was a realisation that the original “marketplace” structure had to change. Under that model, also known as “peer-to-peer,” companies like OnDeck tried to act like simple matchmakers, connecting applicants with investors who liked the look of their credit profile, in exchange for an upfront fee.

Back in the summer of 2015, some 40 per cent OnDeck’s loans were funded that way. But that left it vulnerable to withdrawals of investors when market sentiment soured, leaving the company with a mountain of fixed costs to cover with patchy income.

Now, the company has shifted almost entirely to signing long-term supply deals with institutions such as banks and life insurance companies. Every loan that comes in through the door is effectively already committed to be sold.

OnDeck has aimed to overhaul its shareholder register, meanwhile, going out of its way to attract finance-focused investors, rather than tech accounts that wanted to see gung-ho growth every quarter.

OnDeck’s skew towards the latter kind of investor was a byproduct of its initial public offering, when “fintech” was among the hottest themes on Wall Street. Back then, underwriters had courted tech-focused fund managers with prospectuses laden with Silicon Valley buzzwords like “total addressable market” and “proprietary algorithms that leverage behavioural data”.

Investors like these were primed for rapid revenue growth, and when this failed to materialise, they sold the stock. OnDeck’s peak-to-trough decline in its share price was 86 per cent; Lending Club’s was 90 per cent. However much the companies protested that slower top-line growth was actually a positive — implying that they were being more selective on lending — investors were unpersuaded.

Over the past couple of years OnDeck has spent more time at investor conferences focused on financial stocks, while cultivating more of a following among financials-focused analysts.

The rewards are coming through, says one institutional investor who spoke on condition of anonymity. The problem was not the business — which is sound — but “the messaging”, he says, which was falling on deaf ears.

Mr Breslow is happier with the investor mix now and how results are received. In the second quarter, for example, OnDeck reported a slight fall in loan originations, from $591m to $587m. But investors welcomed a relatively low net charge-off rate — a measure of bad debt — of 11.2 per cent, from 18.6 per cent a year earlier.

In the third quarter originations were back up and the charge-off rate edged down further, to 11.1 per cent. Shares in the company bounced almost one-third following the results — the biggest one-day move since the IPO.

“I still think we are a fintech but a ‘tech’ is a stretch,” says Mr Breslow. “We acknowledge we have . . . credit risk and liquidity risk, which are hallmarks of financial companies,” he adds. “But at the same time I think we have a very differentiated . . . model at the core, which is powered by original technology and original analytics. Over time we expect companies in this business to be primarily valued by profits.” 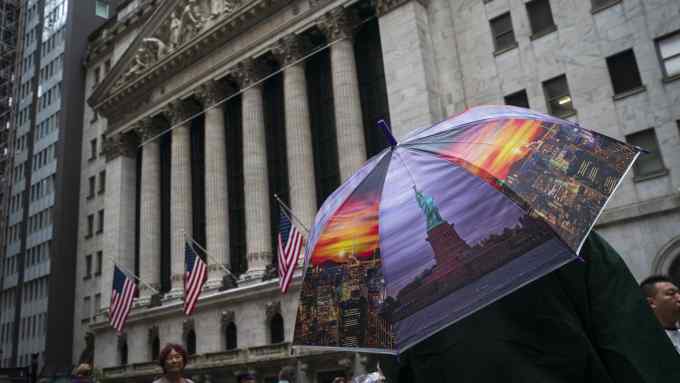