Art collector J Tomilson Hill: ‘It’s about what I like’

There’s a torrential downpour in New York, and billionaire J Tomilson Hill pulls up to a new tower in Chelsea not in a sleek, luxury SUV with a private driver but in a yellow taxicab. When the elevator doors open to the headquarters of his Hill Art Foundation, which is still under construction ahead of its January opening, he is greeted by a massive pile of dirt with a shovel sticking out of it. “It’s a conceptual art piece,” he quips and bursts out laughing.

Hill’s low-key style and genial sense of humour — he wrote for the Harvard Lampoon, the college humour magazine, during his undergraduate years — are just two of the qualities that challenge stereotypes of the growing breed of billionaire art collectors. Unlike many founders of art foundations, who cloak their undertakings in a patois of altruism, the 70-year-old Hill is blunt about the tax benefits. He also makes no pretence of acting for posterity; the foundation itself owns only about 10 works, he says, leaving “hundreds” in the Hills’ possession. “This space is designed for us while we’re alive,” Hill says, referring to his wife of 38 years, Janine, and himself. “When we’re no longer around, [the foundation has] the ability to turn it back into condos.”

And, while the foundation will be open to the public, Hill is quick to note that he has no ambitions to build a Glenstone, the sprawling museum in Maryland founded by Mitchell and Emily Wei Rales. “It’s not a museum; it’s an art foundation,” says Hill, who, as a board member of the Metropolitan Museum of Art and former chair of the Hirshhorn Museum and Sculpture Garden, knows the difference. “A museum implies permanence and a higher scholarly framework. This is about our taste and our objectives around education. This is personal. It’s about what I like.”

What Hill likes runs the gamut from the figurative expressionism of Francis Bacon and the bold black-and-white text paintings of Christopher Wool to the lyrically detailed bronzes of the Renaissance. “I want to be an advocate not just for quality but for juxtaposition — getting people to think about art in a different way, a different context,” he says, as a team of workers, one on stilts, plasters the wall behind him.

Hill’s affinity for art is part of his DNA. His mother was an artist who worked in her studio daily. Art and museums were part of Hill’s privileged Upper East Side childhood, which included play dates at his friend Richard Rockefeller’s house, where ball-playing was restricted to outdoors in deference to the Matisse or Van Gogh hanging on the wall. At Harvard, he took art classes while studying Japanese before attending the business school and serving six years in the Army Reserves. He also hung out on occasion with Andy Warhol, who would visit Cambridge, bringing along a tape recorder to interview students in a greasy spoon late at night.

Later, Hill saw Warhol at Studio 54. “He didn’t recognise me,” Hill says. “He had a space in the VIP room, and I was hardly a VIP.”

You could buy great Bacons in the 1990s for a million dollars. They’re now out of sight

After architect Peter Marino did the Hills’ first apartment — he has subsequently designed homes for them in East Hampton, Telluride and Paris, and their new Fifth Avenue apartment — the couple started buying modestly priced art to fill the walls. Hill didn’t get serious about art until he was pushed out as co-CEO of Lehman Brothers in 1993. (He recovered quickly, joining Blackstone, where he eventually took over the hedge fund group. After overseeing its growth from less than $1bn to more than $75bn in assets, Hill left the role in January and plans to leave Blackstone at year’s end for a new data-driven venture.)

The first major work Hill bought was a Warhol hand-painted “Soup Can” for, he says off the top of his head, $340,000. He decided to focus his collection on eight major postwar and contemporary artists. “Why eight? I have no idea,” he says. “I knew I didn’t want the one-of-each approach.”

He sat down with Janine and Marino, who by then was both an avid collector and a trusted friend, and each drew up a list according to several criteria: each artist had to be a game-changer “who either rewrote the history of art or were so influential that everyone afterwards had to take notice”, (relatively) affordable and prolific. Their lists overlapped a good deal, with all three including Bacon, Willem de Kooning and Cy Twombly. “You could buy great Bacons in the 1990s for a million dollars,” says Hill. “They’re now out of sight.”

The biggest criterion, he adds, was that “I wanted to live with it.” Janine, a director at the Council on Foreign Relations, maintained veto power, which she exercised on a Warhol “Electric Chair” when their two daughters were young. “I had to wait until our youngest went off to Brown to get my ‘Electric Chair’,” he says with a shrug.

Hill also began acquiring Renaissance bronzes and Old Master paintings. “I like the idea of a bronze in front of a Twombly or a Marden,” he says, the way his collection was shown in an acclaimed show at the Frick in 2014.

Eventually, he expanded the original eight artists to 12 and, more recently, branched out into a younger generation, primarily women in their 30s and 40s, including Tauba Auerbach and Sarah Crowner, many of whom were tipped by Hill’s daughter Astrid, an art adviser.

About a decade ago Hill began the search for a place to house a foundation. He finally found this space owing, indirectly, to another mega-rich collector’s real- estate hunt with Marino. As Marino tells it, he helped Peter Brant zero in on a former Consolidated Edison substation in the East Village as a city outpost of his Greenwich, Connecticut, foundation. “It’s very tall; it’s a shoebox,” Marino says. “I assumed [Hill] would want something like that.”

When Hill told him that he wanted pretty much the opposite — a place where a contemporary work, such as an Ed Ruscha text painting, could hang in dialogue with an intimate 16th-century Giambologna bronze — Marino knew the exact spot: a building of his own design in Chelsea. The condominium, right on the High Line, the popular elevated park that stretches through the art district, was still under construction, but Hill quickly snapped up what was meant to be a duplex apartment. (It took months to change the zoning to commercial.)

“I wanted to be in the flow, part of the community,” where visitors could wander in and out, Hill says. “I did not want it to be a destination.”

Marino undertook the foundation’s design, creating more wall space, installing moveable walls for flexibility and fashioning a small sculpture garden. With almost 7,000 square feet, the foundation has two main galleries, one of them double-height, overlooking the High Line, and some smaller spaces also designed for showing art. Marino is installing plenty of his furniture in an attempt to make the atmosphere less sterile than the typical gallery or museum and encourage quiet contemplation. “I don’t believe standing in front of art is the only way to look at it,” Marino says.

The inaugural exhibition will be Christopher Wool — the Hills and the foundation own 21 of his works — alongside their four Robert Gobers, and Hill is also planning a portrait show in which he will pair old and new, such as Rubens and the 29-year-old painter Jordan Casteel. Hill is toying with how to rotate exhibitions while still establishing a “Hill brand” by keeping certain iconic pieces, such as a Gober playpen or Charles Ray’s sculpture of a mountain lion devouring a dog, on permanent view: “When I go to the Beyeler [in Basel, Switzerland], I want to see the Giacomettis!”

Although his collection is worth hundreds of millions of dollars and Hill acknowledges he has sold works at a profit — he doubled his money on a Basquiat that “didn’t hold up” to the Bacon hanging next to it — he insists he never bought an artwork “saying it’s going to go up in value”. “The whole monetisation of art is a problem,” he says. “It is an asset class, but you shouldn’t think of it as an investment.” 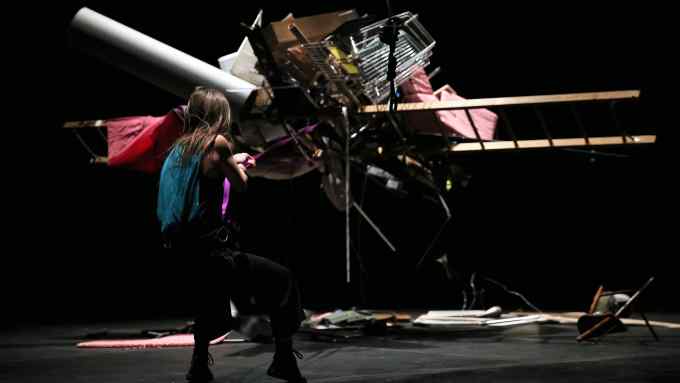