In 2011, Lynne Cooke, then chief curator at Madrid’s Museo Reina Sofia, curated a show by the autodidact artist James Castle that, for her, questioned the received narratives of American art history.

Cooke, who was born in Australia and studied at the Courtauld Institute in London, was primarily a critic and academic before she was appointed curator of the Dia Art Foundation, New York, in 1991. Now a curator at the National Gallery of Art in Washington DC, her résumé boasts a Venice Biennale (1986), a Carnegie International (1991) and a Sydney Biennale (1996).

The Castle exhibition, however, was unlike shows she had done before. Not only is Castle’s output vast — comprising countless drawings, cardboard constructions and books — it is entirely undated. Born deaf in rural Idaho in 1899, the artist never spoke about his work. He never attended art school; in fact, he never learnt to read, write, lip-read or sign. Nevertheless, he taught himself to foreshorten, to make his own books and meaningfully to incorporate words in his drawings, which he rendered with a unique admixture of soot and saliva.

Castle is today one of the most celebrated figures in the field commonly known as “outsider art”. Cooke resents the classification. “I think he made remarkable work by any standards. He doesn’t need a label.” She arranged her exhibition so that most visitors would see Castle’s work before arriving at the obligatory wall text revealing his extraordinary biography.

What, really, is the difference between work by an artist with academic training and one without, Cooke wondered. “If this work can be shown in a contemporary context without differentiation, if we can’t see a difference without someone saying that this artist has credentials and this one doesn’t, then maybe the classification isn’t tenable and the segregation, the ghettoising, doesn’t pertain.”

I spoke to Cooke over lunch at the Los Angeles County Museum of Art, where she was installing the third iteration of her groundbreaking and widely acclaimed exhibition Outliers and American Vanguard Art, the culmination of years of research into self-taught art that began after her transformative experience with Castle.

Cooke adopts the term “outlier”, taking her inspiration from Malcolm Gladwell’s 2008 book Outliers: The Story of Success, instead of the ubiquitous classification of “outsider” because it implies the position is still open to negotiation. It does not designate an inside and outside, but a mobile relationship between the norm and the exception.

This contrasts with past exhibitions in this field, which have tended either to focus exclusively on the work of self-taught makers — sometimes clumsily lumping together folk artists and religious visionaries with the institutionalised mentally ill — or alternatively have integrated schooled and unschooled artists with a sincere but contrived even-handedness (Massimiliano Gioni’s The Encyclopedic Palace exhibition for the 2013 Venice Biennale remains the pre-eminent example of the latter.) Both approaches have their problems.

When the quilts made by the African-American women of Gee’s Bend, Alabama, were shown at the Whitney Museum in 2002, they became the toast of the art world. Enthusiastic and well-meaning critics compared them to Modernist abstractions by painters such as Matisse or Klee. Cooke dissents. “I think the quilts are not interesting because they want to be paintings. They’re wonderful art works in their own right.” Several examples feature in her exhibition.

Outliers is radical because of its unsentimental academic rigour. It examines three periods — the 1930s, 1970s and late 1990s — when the distinctions between mainstream contemporary American art and work from the country’s social or geographical margins was most blurred. It shows that Modernism developed not only in the cities, not only in the academies where highly educated, usually white, usually male authorities traditionally held sway.

“These were all moments of social, political, economic and cultural upheaval,” explains Cooke. “In such times, values, precepts, protocols, norms all come into question. There’s much more flux; there’s a porousness in certain kinds of boundaries. And there are possibilities of assimilation, integration and inclusion each time.”

In the 1930s, the Works Progress Administration enabled countless people who harboured artistic impulses to be creatively employed, from Willem de Kooning, a housepainter who enrolled in the WPA Federal Art Project murals division, to the itinerant labourer Patrociño Barela, whose religious carvings feature in Cooke’s exhibition.

In the 1970s, Chicago Imagist painters, including Jim Nutt and Gladys Nilsson, were especially excited by the drawings of local autodidact Joseph Yoakum and Mexican farmer Martín Ramírez, who was interned in a Californian mental asylum. The originality of such artists were inspirational for the Chicago-based artists who felt, perhaps, that they, too, were working on the margins.

Outliers reveals not only what was excluded from the orthodox canon of art history, but also what was erased. Horace Pippin, an African-American artist who didn’t go to art school, exhibited in 1938 at the Museum of Modern Art and was widely collected and championed (notably by MoMA’s director Alfred H Barr) until he died in 1946. The dismissal of Barr (partly due to his widely ridiculed 1943 retrospective of self-taught painter Morris Hirshfield) contributed to Pippin’s work being eclipsed in the postwar years by Abstract Expressionism.

In Europe, interest in self-taught art has historically centred on what was once termed “the art of the insane”. Cooke’s is an explicitly American history, in which issues of race rather than psychological normativity dominate, now more than ever. “For most of us working in cultural institutions today,” Cooke says, “the big questions are ones of cultural inclusivity and diversity. For me, this was always a project rooted in the present, conceived from a vantage point in the present.”

One exhibition, Cooke concedes, cannot transform the way the contributions of self-taught artists are valued by the mainstream. “Shows come and go,” she says. “It’s in the museum collection hang that we see their impact, as curators narrate their institution’s version of art history. We’re beginning to find collections installed from a feminist perspective, or in relation to queer politics. We need many such narratives.” As she points out, “No one is an outlier in every dimension of their work and thought. We all have multiple subjectivities.”

The market for Outsider Art

So-called “outsider” artists, self-taught and on the fringes of the established art world, are increasingly popular in today’s revisionist market, writes Melanie Gerlis. Names such as Henry Darger (1892-1973), a hospital janitor who spent his childhood in an asylum, Bill Traylor (1854-1949), who was born into slavery, and Adolf Wölfli (1864-1930), a Swiss labourer who was later a mental health patient, have recently gained recognition.

Among items sold from the collection of the late actor Robin Williams and his second wife Marsha Garces Williams at Sotheby’s in October was Wölfli’s “Der San Salvathor” (1926), estimated at $150,000-$200,000 and which soared to $795,000 (with fees). “That really surpassed expectations!” says specialist dealer Andrew Edlin, who owns the Outsider Art Fair that has editions in New York and Paris.

Edlin also notes increasing interest through his fairs. The 26th edition of the New York event in January notched up record attendance on its opening day with the Connecticut dealer James Barron recording “a stampede towards our booth”. This fair hosted 32 dealers when Edlin acquired it in 2012 and now boasts 65. Edlin also reports “several new buyers” at the sixth Paris edition held in October, including for works he was offering by the French street sweeper Marcel Storr (1911-76) at about €35,000. A Storr show is currently in Edlin’s New York gallery (Mysterium Tremendum, until December 8).

Outsider artists began to attract the attention of the insider art world in 2013 thanks to some major exhibitions. These included Massimiliano Gioni’s The Encyclopedic Palace at the Venice Biennale (a title lifted from an unrealised work by a self-taught artist); Alternative Guide to the Universe at London’s Hayward Gallery and the 2013 Carnegie International show, which highlighted Outsider artists.

The market took note and increasing prices soon followed. Come 2014, Christie’s in Paris sold a Henry Darger watercolour for a then record €601,500. According to Artnet, the artist’s previous auction record, achieved the year before, was €145,500.

Buyers, mostly in continental Europe and the US, are attracted by the so-called untouched, raw qualities of Outsider art: “It is impossible to get Outsider art that is removed emotionally and personally from its maker,” says Christie’s specialist Cara Zimmerman. Her next dedicated sale, on January 18, is the largest yet, she says, and will include a Darger from the collectors Eugenie and Lael Johnson (est $250,000-$500,000) and a Traylor from the William Louis-Dreyfus Foundation ($50,000-$80,000).

But it remains a niche category. Christie’s runs its auction just once a year and plans to open an edition of the Outsider Art Fair in Basel fell through this year. Edlin is among those who believes outsider artists belong on the fringes, however. “The works hold their own, but they are also their own thing,” he says.

READ MOREMiami Art Week 2018
Prison art: ‘I never thought so many people would read my words’ 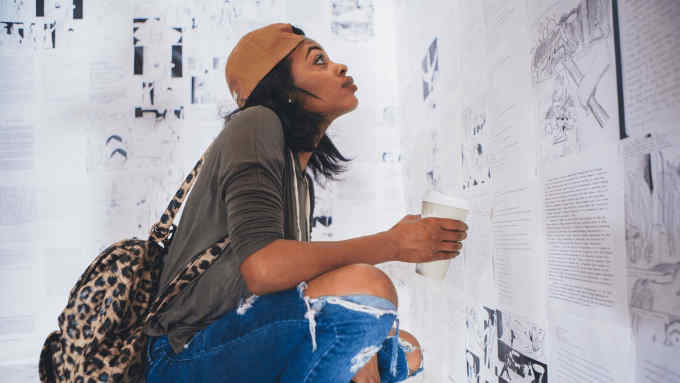