Prison art: ‘I never thought so many people would read my words’

A Florida exhibition of letters, poetry and drawings by inmates aims to shed light on the realities of mass incarceration

“My name is Robert, but everyone calls me Doolie,” the letter begins. “I’m 23 years old today and I have been in prison since I was 16 years old . . . We made a mistake by coming to prison, but I learned a long time ago that prison does not define us; it is what we do while we are in here that defines us.”

This message is one of more than 2,000 lining the walls of Frost Art Museum in Florida, in an installation called The Writing on the Wall, which coincides with Art Basel Miami Beach. It jostles for attention with essays, drawings, poetry and pages from a graphic novel, written by incarcerated people from as far away as Uganda, Australia, Norway and Brazil.

It’s an apt moment to consider incarceration in Florida. On November 6, the state voted to approve a constitutional amendment restoring voting rights to most people convicted of felonies who have completed their sentence, enfranchising an estimated 1.5m people, or nine per cent of the state’s voting-age population. This comes at a time when mass incarceration in the US is coming under increasing scrutiny. The country locks up more people than any other in the world, with 2.1m people currently in American prisons or jails, disproportionately ethnic minorities. In 2016, one in every 38 US adults was under correctional supervision. In August, a major strike swept across American prisons, protesting against violent abuse of prisoners and forced labour.

As a result, there’s a fresh appetite for artists to examine the American prison system. Last year, the Robert Rauschenberg Foundation offered a grant of up to $100,000 to artists addressing mass incarceration, while a current exhibition at Contemporary Arts Museum Houston includes pieces from 42 artists, many of them current or former inmates.

At the Frost Art Museum, visitors are compelled to confront this growing crisis by reading the letters collected by Baz Dreisinger, an academic and activist who promotes education in prisons and the idea of restorative rather than punitive justice. It’s a collaboration with artist Hank Willis Thomas, who taught prisoners in one of Dreisinger’s classes and says he was amazed at “the level of brilliance and creativity that is literally sitting behind bars”. When asked to collaborate for an exhibition in Detroit, the pair decided to display some of the thousands of letters Dreisinger receives from inmates all over the world.

This is the fifth installation of the ever-changing exhibit, where pages are arranged randomly from floor to ceiling. “We intentionally don’t curate the installation,” says Dreisinger, “because we really want this to reflect the full humanity that’s behind bars.” Thomas sees the prisoners as collaborators and the installation as a frame for their voices, so often unheard, arranged in non-linear fashion to provoke questions rather than dictate answers.

Dreisinger and Thomas want to render the concept of mass incarceration at human scale. This is conveyed through the intimate details of many letters, which include stories of poverty and racial division. “For so many people there’s surprise that people in prison can write so well or think so critically or be so emotional,” says Dreisinger. Occasional drawings break up the text, such as a cartoon of two stick figures arguing about sports over dinner, poignant in its mundanity.

Some will wonder what these words can do in art that they could not if presented as activism. Dreisinger believes that art appeals to people who may be intimidated by political debates, or who might approach straight politics with preconceptions. “People come into an art installation with their minds and hearts open,” she says. Amy Galpin, chief curator of the museum, says many visitors are visibly moved by the installation. One student explained how it directly led her to change her views on the death penalty.

Life & Arts
Novelist Rachel Kushner: ‘In US prison there is no redemption’ 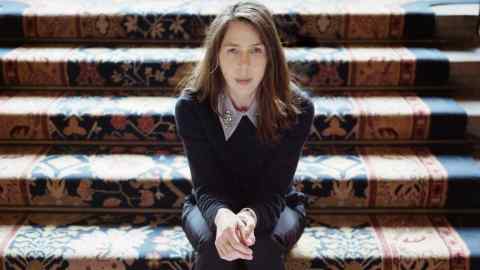 For Dreisinger, increasing awareness is the first step towards action, perhaps encouraging people to support prison reform, or to vote for policies such as Florida’s new amendment. “If the installation was able to impact that vote going in our favour with even one vote,” she says, “that’s the most incredible thing in the world for me and Hank.”

The public exhibition of these papers is as important for the writers as it is for the readers. After years working in prisons, Dreisinger says art and writing are a “sanity lifeline in the context of a very insane setting, prison.To become creative in the context of prison is to reclaim your humanity, individuality and agency in a very big way.”

Some of Dreisinger’s incarcerated students, once released, came to see the first installation of The Writing on the Wall in New York. She describes how many felt moved to see their work as part of something much bigger, making a national statement. One of Dreisinger’s star students, who had spent 20 years behind bars, was brought to tears seeing his writing in a museum. He turned to her and said: “I never thought so many people would read my words.”