On Jocelyn Medina’s 15th birthday, she was robbed at gunpoint, beaten and left nearly naked in the street. Her friends — young lookouts for the Mara Salvatrucha, the Salvadoran street gang that held sway in her neighbourhood — took her to see their local leader, known as the palabrero. “They wanted to know if I wanted them to kill [my attacker],” she says.

She listened via mobile phone as 13 gang members with baseball bats and pistols “disciplined” her attacker. “The man was on his knees, begging,” she says. Her attacker, who was not a gang member, got off lightly: he was not killed, just expelled from the neighbourhood.

That was five years ago and Jocelyn tells the story now with the matter-of-fact tone born of growing up in a country where gangs threaten virtually the whole community — 247 of El Salvador’s 262 municipalities by one recent count — and violence is an inescapable fact of life.

Turf wars between the Mara Salvatrucha and Barrio 18 gangs, and splinter groups, have made El Salvador the world’s most dangerous country that is not at war — ironically, as it celebrates the 25th anniversary of the accords that ended its brutal 1980-92 civil war.

“I went to a school where lots of kids were in the gang — we couldn’t avoid talking to them,” says Jocelyn. “I fell in with a bad crowd.” She started dating the first of her three gang boyfriends when she was 15. “He pulled a gun on me because he saw me with someone else,” she says.

The experience was less terrifying for Jocelyn than it might have been because, by then, she was anaesthetised by an addiction to alcohol and drugs. She started drinking at the age of 10, when her father gave her beer, and was raised by an uncle and aunt. She would come home from school drunk and fail to study. After she left school, she struggled to hold down sales promotion and cashier jobs because of her addiction.

Jocelyn managed to change her life after reading on Facebook about a workshop in San Salvador to train young people to get jobs. Staff at the workshop convinced her to go into rehab and, now dry and drug-free for two months, Jocelyn is applying for sales jobs and dreaming of studying communications. As part of a recent workshop session, holding a microphone and running through her team’s outline for a restaurant business, she looks confident and bright.

Not all Salvadoran women and girls can look forward to such a happy ending. Eduardo, a 45-year-old Mara Salvatrucha member, who is no longer active in the gang, has a daughter aged 22. She was romantically involved with one gang member, then another. “But one was a higher rank, and that’s where the problem started,” he says. For her perceived disloyalty, she was beaten up by seven gang members, he says, “and left in such a monstrous state she was in bed for two days”.

Eduardo refers to the gang, which he joined in Los Angeles as a war refugee, as “the family”. He was voluntarily deported from the US to El Salvador in 1994. Back home, he was swiftly disillusioned by what the gang represented. It was a far cry from the fraternity he had joined in the US, more an attitude of “I’m the strongest, I’m in power and if you don’t like it, I’ll kill you”, he says. So, despite the Mara Salvatrucha tattoos that plaster his torso, arms and legs, he keeps his distance from the gang these days. He can never really leave, though. “That would be betrayal,” he says — punishable by death.

Still, when his daughter was beaten up, he went to talk to the gang. “They told her to leave,” he says. She is now living in a different neighbourhood with a friend. For now, she is safe because her whereabouts are unknown to the gang. “If they find out,” he says, “they’ll . . . ” He finishes the sentence by whistling and miming the action of a throat being cut. “She’s under a death sentence.”

Silvia Juárez is a quiet, focused woman, not given to small talk. She has an encyclopedic knowledge of the chilling gang brutality faced by thousands of girls and women in El Salvador. As co-ordinator of the violence prevention programme at the Organisation of Salvadoran Women for Peace (Ormusa), a non-governmental organisation, she worked on an exhaustive investigation into women and gangs in 2015-16, based on testimony from survivors, women co-opted into gang service, gang members’ girlfriends, mothers of gang members and women jailed for gang membership.

Sexual violence — whether it be as a punishment meted out by gang members, a forced service or simply a part of the “crime economy” in a country where gangs live off extortion — is a constant threat and “adolescents are the most exposed”, Juárez says. “Girls are growing up with the idea that they can’t say no. A large part of this generation will grow up thinking this way.”

Girls as young as 10 are picked up outside schools, she says. “They’re told, ‘It’s the palabrero’s birthday and you’re going to be his present’. They’re returned two days later. Often [the palabrero wants] the gift to be a virgin and once he has used her, everyone can enjoy ‘the cake’,” she says.

One of the saddest indictments of a girl’s status in El Salvador is the pitiful value she commands in the gang’s twisted economy. Members are required to show their loyalty to a jailed leader with tributes, such as offering him their own girlfriends for conjugal visits, Juárez says. The reward could be a gun, another girl or perhaps some mobile phone credit.

Juárez’s investigation was stymied in August 2015, when the Supreme Court designated not only El Salvador’s gang members but anyone collaborating with them as terrorists. That included girls like Maribel’s daughter, who was sent to a juvenile detention centre on the word of a criteriado — a gang member who had struck a plea bargain.

“To save themselves, they put people inside who aren’t [in the gang],” says Maribel. She stands outside the detention centre, next to the Ilopango women’s jail on the outskirts of San Salvador, and hoists her grandson on her hip. The baby was 24 days old when his mother was locked up; she turned 18 inside.

The measure came after the collapse of a gang truce that had lasted from 2012 to 2013 and had halved the murder rate. The leftist government of former wartime rebel commander Salvador Sánchez Cerén, who took office in 2014, has cracked down hard on gangs, deploying balaclava-clad forces in an “iron fist” strategy and slapping extraordinary measures on imprisoned gang members, including restricting their visiting rights.

“It has borne fruit: homicides have fallen,” Juárez says. National police figures point to a murder rate so far this year that is 37 per cent lower than the same period last year, although security forces have been accused of extrajudicial killings. “But sexual violence has stayed the same, or increased,” she adds.

Gangs are not the only threat to San Salvador’s girls. Ana (not her real name) was 14 when a woman showed up offering her a job in a kitchen. Money was tight, so she leapt at the opportunity. The job turned out to be in a brothel and Ana says she and half a dozen or so other girls, some even younger than her, were treated “worse than prisoners”.

Ana escaped the brothel when her captors took her out in a car. While they were distracted, she slipped away. Now 22 and living with her partner and their nine-month-old baby, she makes a living selling used bras under a programme run by US NGO Free the Girls and its local partner, Mission to El Salvador, that helps victims of people trafficking.

Cecilia was saved by education. Now 17, she attends an education programme run by a local NGO, Fundación San Andrés, which offers classes in English, computing and ethics, and runs a football academy on the site of an old racecourse.

Men get priority. At work they don’t do anything and make twice what I do

The grounds, with their lush tropical greenery, feel a million miles from the horrors of her old neighbourhood, where she once saw a woman’s head strung up by its hair on a door as she left for school — the corpse’s legs and arms had been hacked off.

Pamela, 13, and her 11-year-old brother both dropped out of school last year after a fellow student was gunned down by a hitman on a motorbike as he walked home from class. The victim was 13, and wearing school uniform. “I don’t even let them go to the shop now,” says Rosa, the children’s grandmother. “We feel exposed to everything.”

Pamela could soon join the ranks of the “neither-nors”. More than a quarter of Salvadorans aged between 15 and 24 in this country of 6.5m people neither work nor study, according to an official 2016 survey of households. Overall, a third of the population live below the poverty line, remittances make up 17 per cent of GDP (though their contribution is wiped out by the cost of violence, the central bank estimates) and average annual income is $3,900. The national jobless rate is 7 per cent, but unemployment in the 16-24 age bracket is running at twice that level. No wonder so many girls see no future for themselves at home.

Gloria, 18, who is out cruising a San Salvador shopping mall with a friend from her school days, works in a kitchen, earning $7 for an eight-hour shift — lower than the official daily rate for service and other industries, and only fractionally above what a farmworker makes. She would like to live in Canada or Spain. “Here men discriminate against us,” she says. “They get priority. At work they don’t do anything and make twice what I do.”

For Maria (not her real name), the lure is New York, where she would like to put her graphic design studies to use working in a gallery. But, she sighs, she has only a one in a hundred chance of winning a scholarship, “and I wouldn’t go illegally — it’s very dangerous”.

Her mother Raquel, who tends a stall outside the women’s prison where she was briefly an inmate, starts to cry as her daughter talks about her aspirations. The family live in a corrugated shack nearby. The letters “MS” daubed in black graffiti on a nearby wall mark the Mara Salvatrucha turf. “Things are getting worse and money doesn’t stretch far enough,” Raquel says. “I hope her dreams don’t get ruined.”

Johnny Wright, a young legislator from the conservative opposition Arena party, fears the current situation could worsen further if US president Donald Trump decides not to renew protection for 190,000 Salvadorans living in the US under the so-called Temporary Protected Status programme, due to expire in March 2018.

An exodus of deportees from the US would strain El Salvador’s fragile finances and, many fear, ratchet up the violence that exploded in the 1990s, when thousands of Salvadorans who had joined gangs in Los Angeles were deported.

For now, gangs can offer young people a sense of belonging in a country where nearly four out of 10 children under 17 do not live with one or both parents. “The gangs are a product of exclusion and [abandonment],” Wright says. “They are a monster we have all created.”

Meanwhile, El Salvador’s seemingly intractable crime problem has trapped and is torturing a generation of its girls. As Susan Cruz, another former member of a transnational gang but no longer active, puts it: “Raising girls in El Salvador is child abuse.” 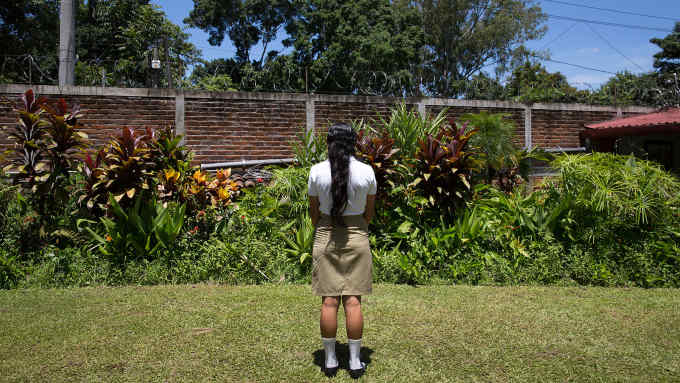