Photo essay: Martha and me

Do you remember what it was like to be a teenager? The experience of being both child and adult in one body, the need to start negotiating the world outside your family?

One day, Martha asked her stepmother why she no longer took her picture. “She was worried I was losing interest in her,” says photographer Siân Davey. “It felt like a demand to be seen.”

Martha had turned 16 and was spending more time away from the family home in Devon, south-west England. “I realised she was separating from us,” Davey says. “She was becoming her own woman with her own mind.”

How could Davey understand this transition in her daughter’s life? Teenagers usually hide fragile new relationships from the scrutiny of their parents. Friendships are forged through long hours in parks and gardens. Or curled up in bedrooms, talking late into the night. Or in the streets, away from the safety and comfort of home.

Davey and Martha made an agreement. Using a medium-format camera, Davey would photograph Martha. In return, Martha would provide her stepmother with access to her group of friends. “She let me in when she was hanging out with her friends,” Davey says. “She allowed me into her parties, to the parties after the parties. I had to attune myself to her friendship group, to get a handle on their boundaries. At first, they saw me as a threat, a mother, so I had to gain their trust.”

Davey would turn up at five in the morning to photograph Martha and her friends as they spilled out of a club in Torquay, or lingered in the smoking areas and takeaways of early-morning Plymouth. She photographed them hiding under a duvet, sharing their hangovers, or sneaking looks and jokes as they lazed in the park.

“Photography was a way for us to explore each other, what our relationship means at this time in her life. And it allowed me to explore that part of myself. I remembered what it was like to be that age, to be that untethered.”

Davey’s images capture how isolating adolescence can be. “Our teenage years are full of these overwhelming feelings,” she says. “Those go hand in hand with these incessant questions about who we are. Martha’s friends are a safeguard and learning ground for her. It’s where she begins to make sense of things like intimacy and love, and how these idylls can be met with the tensions of adulthood.”

‘Martha’ will be published by Trolley Books in spring 2018

Get alerts on Adolescent girls when a new story is published 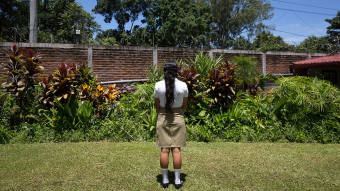