As new luxury facilities open on the back of buoyant growth, structural problems remain

We’ll send you a myFT Daily Digest email rounding up the latest Greece news every morning.

From the late Libyan strongman Muammer Gaddafi to US pop star Lady Gaga, rich and famous visitors to Athens have long chosen the Astir Palace.

The complex of luxury hotels and cabanas on the Vouliagmeni peninsula, whose development was steered by the state, became the accommodation of choice for Greece’s well-heeled shipping tycoons and politicians, as well as the international jet set.

Frank Sinatra came, as did ballet dancer Rudolf Nureyev and actress Brigitte Bardot, who in 1976 sent a lookalike to the beach to distract photographers. In the 1990s, Bosnian-Serb wartime leader Radovan Karadzic held court here as anxious diplomats tried to put a stop to bloodshed during the Balkan wars.

This March, the Astir reopened under the Four Seasons brand — its first Greek establishment — after a €480m privatisation and sale to Gulf and Turkish investors.

The Astir redevelopment, on the so-called Athens Riviera, is emblematic of efforts to move Greece’s tourism sector further upmarket. Vouliagmeni’s two hotels, with a total of 302 rooms, are receiving a €150m upgrade, and 13 plots will be sold for about €40m apiece to allow the wealthy to build homes overlooking the Aegean. The peninsula’s marina is also being modernised to attract the megayacht-owning class.

“There is no other place where you will find this combination in the southern Mediterranean,” says Stelios Koutsivitis, Astir chief executive, detailing plans for a retail and restaurant makeover. “We have the infrastructure to target this type of clientele — we just need the product.”

No industry is more fundamental to Greece than tourism, which generates 10 per cent of GDP — a figure that rises to 25 per cent when indirect contributions are included. The sector is also one of the most important employers, providing one in six jobs in peak season and one in three indirectly; year round, it accounts for one in 10. In 2017, Greece’s travel receipts covered 80 per cent of the trade deficit. That year the country welcomed 27m tourists and another 3m who visited on a cruise.

Hotels, resorts and facilities need constant reinvention, however, as expectations change. Projects such as the Astir are vital to the industry’s ability to grow. The renovation of the complex “sends a message that we’re moving further upmarket”, says Elena Kountoura, Greece’s former tourism minister who resigned earlier this month to run in the European Parliament elections.

Greek tourism has enjoyed several buoyant years. According to SETE, the Greek Tourism Confederation, receipts grew 56 per cent between 2012 and 2018. Direct spending by visitors in 2018 rose about 10 per cent year-on-year in the main tourist season, according to the Bank of Greece, ahead of overall GDP growth.

At the same time, the sector has been taking itself upmarket. In 2011, according to a report on Greek tourism by business advisers PwC, 108,000 of the country’s 763,000 visitor beds were graded as five-star. Today the country has just over 800,000 beds, with more than 150,000 of those graded five-star: in effect, all of the net growth over the period has been at the top end of the market. Investment has been helped by the fact that the burden of non-performing loans in the tourist sector, while high, is lower than in the rest of the economy.

“Greek tourism has gone through a renaissance over the past three years. Six out of 10 visitors can be classified as high-end tourists who spend freely,” says Kountoura. “Given that we had a very difficult time during the crisis, we think this is a big achievement. But there is still room to build on this by promoting investment in new hotels and integrated resorts, and raising our standards of service further.” She says three more private marinas are being built — at Pylos in south-west Greece, the island of Ios in the Cyclades, and Alimos in Athens — that will heighten competition.

As Europe’s economy slows again, the expectation is that the cycle of strong growth in tourism will end: SETE predicts revenues and arrivals in 2019 will be similar to 2018. “When Europe is not doing well, Greece does not do well,” says Costas Mitropoulos, an executive director at PwC in Athens. “2019 is not going to be good; it is not going to be disastrous, but we will not see 10 per cent growth.”

Mitropoulos identifies two areas where he says Greek tourism needs to make progress. The first is to extend the tourist season beyond the peak summer months. A wider variety of tourism — bringing in more conference trade or selling experiences such as cultural tours or health breaks — would help.

Kountoura says progress is being made. “Overall we’ve seen a 40 per cent increase in winter tourism [in the past four years] — that means the period between November and the end of March,” she says. “Our aim is to become a 365-days-a-year destination.”

The bed tax — a levy on tourist accommodation that was introduced in 2018 — could be limited to the summer peak months, SETE suggests, to encourage travel out of season and to different areas.

More generally, SETE complains of the rising tax burden on the industry, partly as a result of Greece’s commitments under the terms of its international bailout. The weighted average value-added tax rate for tourism-related businesses is 17 per cent, the organisation says, compared with an average of 10 per cent for competitor countries. Of every €100 spent in Greece by a visitor, €33 ends up in taxes and insurance contributions, compared with €16 in Cyprus.

Mitropoulos’s second area for improvement is how Greece can spread visitors more evenly across the country. Five of its 13 regions receive more than 80 per cent of arrivals and almost 90 per cent of revenue. “In tourism terms, the rest of the country is empty,” he says.

This need not entail large-scale hotel building: some of Greece’s less visited areas have relatively underused tourist facilities thanks to previous incentive programmes. But they do require better marketing to sell other regions, industry analysts say. An example to follow is Costa Navarino, a resort in the Peloponnese where Mitropoulos says positive marketing has helped the broader region. “The result is that the whole area is booming. It has become a destination people read about and see,” he says.

Tourism minister Kountoura gives further examples. “There are less-developed areas, especially on the mainland, that we’ve been promoting by making strategic deals with international tour operators and charter airlines, for operating out of smaller regional airports,” she says. She points to Epirus, in north-west Greece, for adventure tourism, and the mountain villages of the Peloponnese for their architectural heritage and gastronomic traditions.

The other main frustration for the industry remains the pace at which development can take place. Greenfield projects can take 15 years on average, according to PwC, and even important large “fast-track” works have taken on average close to four years. Meanwhile, planning and permit procedures need “immediate improvement”, says SETE, which laments the adverse experiences of prospective investors over the years because of permit-related bureaucracy.

Few countries can boast sights as breathtaking as Athens’ Acropolis, but SETE says Greece’s rivals are often better at enhancing the “sense of place” in the visitor experience. It also says more must be done to improve the upkeep of attractions.

While Greece cannot live without tourism, its industry acknowledges the problems it brings, with traffic, overcrowding and environmental pressure — for visitors and the population alike. As SETE says: “In order to have happy tourists we must initially have happy residents.”

Get alerts on Greece when a new story is published 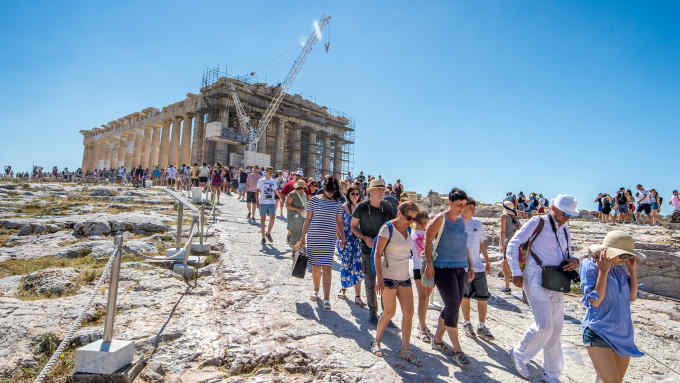