Agios Georgios is described by its owner Terna Energy as Greece’s first onshore wind farm with “offshore characteristics” — and the 10-minute helicopter ride to reach it makes it clear why.

The narrow, steep-sided, rugged island rear ups out of the Aegean. Along its spine, the 55-metre blades of 23 wind turbines turn vigorously: the wind here is far fiercer than on the mainland, visible 20km away.

Ioannis Kouris, one of Terna’s executives who helped establish the wind farm, reels off the advantages of the location: close to the coast, uninhabited (though with a host of archaeological remains that were carefully excavated) and windy. The breeze blows from the north for 80 per cent of the year, making the orientation of Agios Georgios ideal for wind power.

The 73MW wind farm on Agios Georgios, which cost €150m and opened in 2017, produces enough electricity each year for 40,000 households. Terna is still investing, building accommodation for the handful of engineers and support staff who work there in two-week shifts. Altogether the company has 536MW of wind farms in Greece; the country in total has 2,860MW, producing 6,300GWh annually.

Energy industry commentators say Greece could benefit from offshore wind turbines, which have become familiar in other parts of Europe such as the North Sea, but Greece’s government prohibited offshore development in 2010.

“There is significant potential in the Greek seas, even though it is not so easy technologically, as it is quite deep water,” says George Peristeris, Terna’s chief executive. “We had developed a big pipeline [of projects]. Then the government decided to stop all private installation offshore.” One reason suggested by others in the sector is the opposition of Greece’s powerful tourist industry.

Today, Greece has ambitions to become an energy hub for the region. Its geography and climate suggest much potential for renewable energy generation: abundant sunshine, mountain slopes and a vast coastline with thousands of islands, many of which could be put to use for solar and wind power.

As far as traditional energy sources go, the country hopes for further oil discoveries, building on production that started in 1981 in the Aegean offshore Prinos field in the north-east of the country. Prinos is owned by Energean, a company with roots in Greece that listed in London in 2016 and is now in the FTSE 250 index. Energean’s latest well in the field went into production in April. Production this year from the field is expected to be about 5,500 barrels per day.

The country is also a point of convergence for various pieces of regional energy infrastructure. Among the plans, the most advanced is the €4.5bn Trans Adriatic Pipeline (TAP), which from 2020 should bring gas from Azerbaijan through Greece to Albania and Italy. The project — an international consortium led by UK oil major BP and Socar, the Azeri state gas company — is part of the Southern Gas Corridor initiative, aimed at reducing Europe’s dependence on Russian gas.

“Our project — connecting a new source of gas with European networks — is a major contribution towards Greece becoming an international gas hub,” says Katerina Papalexandri, country manager for TAP. The 880km pipeline will have an annual capacity of 10bn cubic metres, of which Greece is expected to take up 1 bcm.

Meanwhile, Revithoussa, a liquefied natural gas terminal near Athens owned by Desfa, the recently privatised gas transmission company, is an important hub for the Balkans. This year “the needle will start to move” for Revithoussa after an expansion in 2018, says Fernando Kalligas Castiella, a Desfa board member.

“We think there is a lot of value in Greece — it still has lots to develop,” says Kalligas, who is also country representative for Enagás, one of the investors in TAP.

In oil and gas, Exxon and Total are exploring off Crete, and a mooted east Mediterranean gas pipeline, which would involve Greece, which is approaching viability as exploration yields more discoveries off Cyprus and Israel.

Such a pipeline “would make a huge difference — it would open access to the European market for everyone in the region”, says Mathios Rigas, chief executive of Energean, which sees its gasfields in Israeli waters as a source of growth. He says Energean is interested in investing “anywhere I can fly to within three hours from Athens”.

Nevertheless, Rigas laments Greece’s lack of a broader oil and gas ecosystem and says the country needs “one or two successes” to entice more big companies. “We are still the only producer in Greece,” he says. Rigas thinks politicians have deterred foreign companies with their criticism of the industry. “That does not help to attract investment in the country. To create an industry you need more players. We want the country to create the right stable environment.

“We are starting to see the majors coming into the country, but to keep them, politicians need to understand there has to be stability and consistency in their messages.”

Greece’s energy sector also remains constrained by the problems of connecting its complex territory. Scores of its islands are in effect off the grid and reliant on expensive diesel-fired generation.

To create an industry you need more players. We want the country to create the right stable environment

Moreover, the market is dominated by state-owned PPC, which owns about two-thirds of generating capacity and dominates household supply. Its power stations, fuelled by lignite — a dirty, domestically produced form of coal — are some of the country’s largest sources of power: in 2016 lignite accounted for about 30 per cent of Greek energy production.

An attempt to sell three of PPC’s lignite-fired plants — a transaction demanded of Greece by its creditors — failed in February. Another push was expected for April, contingent on judgments about the fairness of any offers but with no reserve price. “It is crucial, strategically, that we sell,” says George Stathakis, energy minister.

Environmental campaigners would prefer Greece to move away from lignite by closing the plants. As things stand, the national energy plan sets Greece a target of reducing lignite-fired production to 16 per cent by 2030, with renewable sources, including hydro power, forecast to generate 58 per cent.

For this ambition to be realised, investments taking place in Greece’s domestic transmission network are paramount. Better interconnections “will allow the islands to produce more renewables”, says Stathakis. “At the moment they are stuck.”

Manousos Manousakis, chief executive of electricity grid owner ADMIE, details €4.2bn of investment by 2028, with the centrepiece being the first connections to Crete, Greece’s largest and most populous island. One cable is set to go into operation next year, and a further higher-capacity interconnection to the Athens region will cost €1bn and is planned for 2022.

Crete, Manousakis says, could save €400m a year — costs now borne by all Greek consumers — by being connected to the national grid, so the Crete-Athens connection should pay for itself within three years. Another source in the energy sector says: “The moment Crete gets interconnected there will be a big take-off in renewables.”

Further investments will link up the Dodecanese and Cyclades island groups, according to Manousakis. “These are projects that should have been done years ago,” he says.

A recent paper from Nektaria Karakatsani, a board member at energy regulator RAE, says change and competition are starting to take effect. She notes that Greece now has a more robust and reliable energy grid while consumers have more choice — with 20 smaller energy suppliers holding a 22 per cent market share, against 2 per cent in 2015.

Stathakis is satisfied that “a period of transformation” is under way but notes that investors have concerns about the speed of licensing and the clarity of legislation. “We do have a strong record of investment in energy,” he says. “We have made a lot of reforms.” 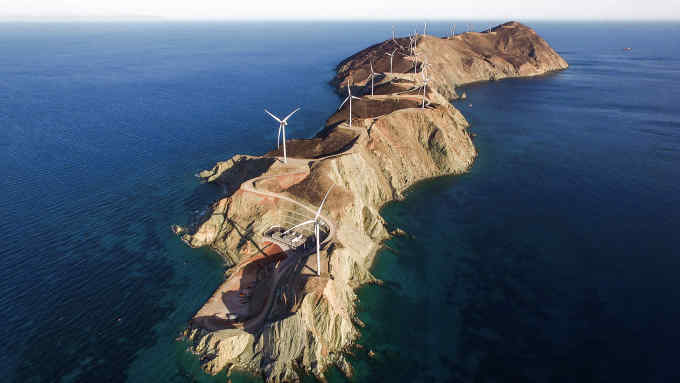