Why do bubbles pair so well with burgers and other junk food? Turns out there’s a science to it

We’re at that time of year when dedicated hosts like to raise their canapé game. But what do wine pros really eat when they’re popping corks behind closed doors? The answer, most of the time, is not fancy at all.

“I’m total trash and I love all things junk – pizza is my favourite match,” says Ariel Arce, the entrepreneur behind New York bars Air’s Champagne Parlour and Niche Niche, where grower champagnes are served with caviar “bumps” and greasy potato chips. “I recently had a pizza with Fleury Rosé de Saignée that matched the sweet and saltiness.”

“I also love Taco Bell. My bubbles of choice for a Crunchwrap Supreme would be Dhondt-Grellet Cramant Blanc de Blancs Extra Brut – it’s got the acid to stand up to the fat. Just because the food is inexpensive doesn’t mean the wine has to be too.”

Raj Vaidya, director of ops for New York’s La Fête du Champagne, is also a fan of pizza and fizz. “My favourite pairing, which I indulge in quite often, is a lean, extra-brut, predominantly Pinot Meunier champagne – I love Moussé Fils.” Vaidya’s other crush is south Indian street food – especially masala dosas: “slightly sour, yeasty crêpes made of rice and lentil flour with spices and vegetables thrown in. I love contrasting the dosa with the inherent fanciness of a rosé champagne – a young rosé like Billecart-Salmon’s signature non-vintage is a great balance to those spicy-sour flavours.”

Sommelier Bert Blaize, co-author of Which Wine When, has slummed it with more prestige cuvées than he’d like to say. “When I was working at Clove Club we’d often have leftover champagne at the end of the week which needed finishing up – I have very happy memories of going home after a shift and having Deliveroo McDonald’s with slightly flat Krug.”

Some might consider this pairing heresy. But Blaize says there’s serious flavour science at play: “A good food match for champagne needs three things: fat, which softens and rounds the acid in the wine; protein to balance the mouthfeel; and carbs, which really draw out the richer aspects of ageing on the lees [spent yeast]. And fast food is full of all three.”

Sandia Chang has poured wine at top restaurants including Noma and Per Se. But it was her Fitzrovia bar Bubbledogs, which served hot dogs and indie champagnes, that really made her name. These days, she runs the two-Michelin-star Kitchen Table restaurant with her husband, chef James Knappett, where a champagne flight costs £250. But she remains a staunch defender of the hi-low match: “Anything fatty and salty is great – I love champagne with french fries. I also like Skips or prawn cocktail crisps with something light and super-fresh like J-M Sélèque’s Quintette blanc de blancs.”

Victoria Moore, author of Fried Eggs & Rioja: What to Drink with Absolutely Everything, likes a sparkling wine “with the crunch of a deep-fried Scotch egg” (though her preference is for the English sparkler Coates & Seely NV, rather than champagne).

If it’s fried, it flies, essentially – which bodes well for British stodge. Peter Crawford, the Scottish co-founder of Decanter’s Champagne Retailer of the Year, Sip Champagnes, likes to kick back with champagne and fish and chips. He suggests Didier Herbert Cuve 4, a Pinot Noir/Chardonnay blend that marries rich and savoury oak notes with tartare sauce-like acidity.

At the Shoreditch bar Seed Library the current luxury flex is potato smileys with Krug Grande Cuvée. Veuve Clicquot also recently did a pop-up greasy spoon serving Yellow Label and fried eggs. “The unexpected gets people talking, breaks down the barriers and allows guests to have fun,” says Xavier Cadiou, director of Polar Black Events, which created the Clicquot caff. “It’s a surprise for guests that’s refreshing. There is a confidence in breaking the rules.”

Not every Champenois sees the funny side. But Odilon de Varine, cellar master at Champagne Gosset, is game. “I love Marmite and would pair Marmite on toast with Gosset Grande Réserve,” he says, “because its aromatic bouquet is powerful enough to match Marmite’s own power. The yeasty feel of Marmite will pair with the Champagne; its iodine sensation also responds to Marmite’s saltiness.” Charline Drappier’s guilty pleasure is Champagne Drappier Brut Nature and popcorn “especially in front of a movie”.

The blood-red Glue Pot diner in Champagne’s “capital” Reims has been pairing burgers and loud music with classy fizz since 1970. The new menu reads like a who’s who of the grower scene: Savart, Tarlant, Agrapart, Geoffroy, Brochet, Guillaume Sélosse. 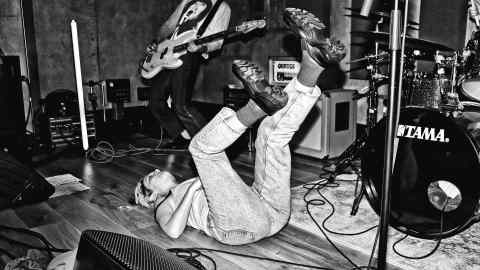 You can sip Larmandier-Bernier with a banana split or Georges Laval with a side of onion rings – and all at a fraction of the price you’d pay for these champagnes in restaurants overseas. I once had dinner there with the celebrated grower Eric Rodez. His powerful, elegant wines were fantastic with food – especially the Ambonnay Grand Cru Rosé. It was, I’m afraid, the Big Boy Burger that ultimately defeated me.