With drinks as good as the acts that play, the music scene lives again

The UK’s bar scene is getting its mojo back thanks to a slew of new venues mixing first-class drinks with live afrobeat, indie and jazz. The launch that twanged my heartstrings is The Lower Third – the glossy new incarnation of the tiny 12-Bar Club on London’s “tin pan alley” Denmark Street, which closed in 2015.

Adele, Regina Spektor and Jeff Buckley all cut their teeth here. And it was where many musicians used to drink, too. I did a gig at the 12-Bar once where The White Stripes turned up. A fortnight later our group, The Mr David Viner Band, was supporting them on their European tour.

The new-look venue, the brainchild of Kagency talent agency founder Karrie Goldberg and Tristan Hoffman (BB King Blues Club, Highline Ballroom NYC), has the same minuscule proportions – but is fitted out to a much higher spec. Instead of Jägermeister shots and warm lager, it serves craft beer from Roger Daltrey’s Lakedown Brewery and cocktails by Shannon Tebay, formerly head bartender at Death & Co, NY and The Savoy’s American Bar. There are lots of imaginative touches: a menu that looks like a six-inch record; a jukebox to be curated by famous names. There are no sticky floors, the lighting is flattering and there are some very posh loos. There’s a tiny stage for solo and acoustic performances – I’m told The Libertines are in the frame. But the main event is now the Club Room in the basement, a 350-capacity gig space. Goldberg and Hoffman insist the venue will remain a champion of up-and-coming acts; but I wonder how many grassroots fans will be in the market for a £15 spritz or a eucalyptus Old Fashioned.

When I asked around in the nearby guitar shops, I only found one person who’d been. But even the most curmudgeonly guitar tech was prepared to admit it was good to have a live venue back on the street.

Another famous venue that’s back from the dead is the 500-capacity Roadhouse in Covent Garden – now re-christened Stereo. In its heyday, this diner and late-night club was peak ’90s: all karaoke, flairing and blue drinks. Under new owners Experimental Club, it will do Americana but with a little bit less cheese. There will be a 40-seater restaurant serving fancy diner food by Andrew Clarke (Acme Fire Cult, Brunswick House) and a bar serving classics with a twist: a lime-leaf Negroni, a hay Old Fashioned and a Chartreuse Basil Smash. Music, curated by the Cassius Consultancy, will include a house band playing funk/jazz/disco fusion as well as DJs and ad-hoc shows by international acts.

The programme here is eclectic, taking in everything from free jazz to traditional music from Cuba, west Africa and Brazil. Star turns have already included Yohan Kebede of afrobeat act Kokoroko and Mercury-nominated jazzers Pete Wareham and Seb Rochford. Gig-goers can dine on scallops with yuzu kosho and teriyaki chicken cooked on a Japanese robata charcoal grill; the drinks list brims with interesting natural wines, cocktails, sakes and mezcals.

If you like your cocktail hour more traditional, you’ve got the plush new Velvet bar at the Corinthia hotel near Embankment, where cocktails by industry veteran Salvatore Calabrese are shaken and stirred to a soundtrack of live jazz standards. And outside the capital, Sterling, the slick new bar at Manchester’s Stock Exchange Hotel, has a live pianist five nights a week – but don’t come expecting your usual hotel muzak, says Daniel Schofield, who runs the bar with his brother Joe. “We have a mix of jazz, pop and more unexpected tunes – and we also take requests. If a guest stays in the hotel more than once they can build up their own playlist.”

The Schofields’ other bar in Manchester, Schofields, won New Bar of the Year and Bar of the Year at the Class Bar Awards in May. And Sterling sees the brothers on equally polished form, with a drinks list combining classics and signature drinks such as the Fuji-San (tequila, shiso cucumber and lime) with canapés by Lush by Tom Kerridge. 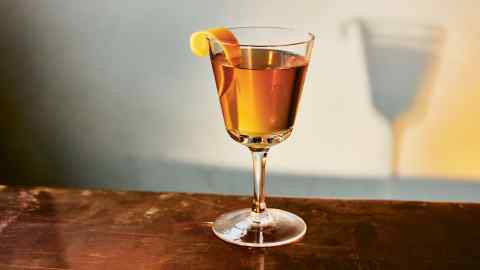 “The days of the speakeasy with Louis Armstrong on a loop are over,” says Daniel. “People now want a bar with real atmosphere. And that’s why live music is so important.” That certainly chimes with me.