On the hunt in white-truffle country

If there were a Tuscan town that had it all for me, it would be San Miniato – and I’m not just biased because it’s my husband’s town, and the place we call home. It’s also because there are white truffles, which have turned the place into a gourmand’s paradise.

Not to be confused with San Miniato al Monte, the church that overlooks Florence, the hilltop town of San Miniato is not on many tourists’ radars, yet it sits in a sweet spot conveniently halfway between Florence and Pisa, and equidistant from Lucca, Siena and San Gimignano – a position that made it a strategic rest stop for centuries on the via Francigena, the medieval pilgrimage route that connected Canterbury to Rome. From almost anywhere in town, a sweeping view of the surrounding Arno valley opens up, revealing a painterly panorama of centuries of Tuscan farming, perfectly combed vineyards, neat olive groves, cypress trees and terraced citrus gardens interspersed with hills of native forest that guard the secrets of one of the world’s true rarities: il tartufo bianco, the white truffle or Tuber magnatum pico.

Only a few select places on the planet – including the Balkans and the Istrian peninsula – can say their soil harbours white truffles. Italy is blessed with a handful of such regions, including Pesaro and Urbino in Le Marche, Alba in Piedmont and the Crete Senesi and San Miniato in Tuscany. Although Alba is the best known, San Miniato’s claim to fame is that a whopping 2,520g white truffle was found here in 1954 by Arturo Gallerini and his dog Parigi, a nugget that weighed in at nearly double that of any modern records. It was given to the American president Dwight D Eisenhower in an attempt to put San Miniato on the map.

To add to the exclusivity of white truffles, try as we may we have struggled (bar a few experimental handfuls in south-west France in the past couple of years) to cultivate them like black truffles (also known as the Périgord or French truffle). They must be sought out in the wild like buried treasure. What makes things even more intriguing is the fact that humans are completely useless at finding truffles and need animals to sniff them out for us. Thousands of euros and months of work are spent buying, breeding and training Lagotto Romagnolo or Meticcio Sanminiatese (San Miniato’s own special breed of truffle dog) puppies to help find and pluck these diamonds out of the woods.

When I go truffle hunting with tartufaio Luca Campinotti, who is part of the inimitable Savini Tartufi team, and his faithful furry friend Fiuto, it is clear that without Fiuto, Luca is just “taking a nice walk in the woods”, as he says. They are a team. Sure, Fiuto likes truffles, but he’s been so well trained that he isn’t into eating them (unlike pigs, which are no longer used for truffle hunting due to the dangerous impracticalities of trying to take a truffle out of a pig’s mouth and the damage they can cause to the ecosystem). Fiuto is there for the treats deep in Luca’s pockets, his adored truffle hunter’s company and, above all, for the game.

The result of a symbiosis with the roots of particular trees (birch, oak, beech and poplar, for example), white truffles grow from spores distributed with the help of forest creatures that seek out the intoxicating scent – squirrels, wild boars and even snails love to snack on truffles too. Luca is always careful to cover the hole made by Fiuto back up with soil, so that the spores left there may grow into new truffles.

Technically in season between September and December, the autumnal white truffle is a fickle thing, naturally less abundant than black truffles. But with Tuscany’s consistently prolonged summer weather, climate change isn’t on its side. Conditions need to be just right – the trees, soil, temperature, moisture. White truffles are up to 80 per cent water, Luca explains, so a bit of rain and some morning frost to help them ripen is beneficial. They’re found in sandy, oyster fossil-studded soil – remnants of the Pliocene era when San Miniato was a seabed. We spot quite a few of these shells as we’re truffle hunting, and I can’t help but notice how perfectly camouflaged white truffles are in their sandy surrounds.

Unlike black truffles, which grow relatively close to the surface, these precious white fungi are usually buried so deep in the ground (often up to 40cm below the surface) that they need to emit a very strong perfume for animals to know they are ripe and ready to be found, like an underground flower blooming. Because of this, the unique scent of a white truffle – earthy, almost peppery, even garlicky – is so much more powerful than mellow and mushroomy black truffle. Fiuto is hardest at work when it’s white-truffle season; Luca, too, with his vanghetto (a stick with a small, sharp, spade-like head on the end, the one and only tool a truffle hunter is permitted to have) in one hand, ready to help dig or break roots if needed, while keeping a keen eye on Fiuto’s eager digging – one paw too far and the truffle can be broken.

Don’t think too much about what to do with a white truffle. Simple is best

A very good way to get to know white truffles better is to visit San Miniato in November, when it’s the peak of the season and the Mostra Mercato Nazionale Tartufo Bianco, the white-truffle festival dating back half a century, is in full swing. Over the last three weekends in the month the streets and squares of the historical centre fill with food and wine stands and the smell of white truffle emanates from every pore of the town. You can buy white truffles directly from the local hunters or sample them in any of the local restaurants in simple dishes where white truffles sing: grated over fried eggs or fresh tagliolini tossed in butter. There are also food stalls selling everything truffle-related that you can imagine and plenty of things you can’t – chestnuts, cheese, cured meats, panforte, fried specialities and more.

Stop by the fourth-generation butcher shop Macelleria Sergio Falaschi, custodians of the town’s only slow-food presidium, for a spiced blood sausage called mallegato. Its fresh white-truffle sausages alone are worth the trip and it has one of the best views from the back of the shop, which has been turned into an informal restaurant.

You can also do a tasting of San Miniato’s local wineries – seek out the wines from Cosimo Maria Masini, a picturesque biodynamic winery where native grapes are grown, pressed and fermented into elegant wines such as “Daphné”, a macerated orange wine that would go nicely with any white-truffle-laced dish.

For a special dinner, book one of the few tables at Ristorante Maggese and try the chef’s dégustation, a good-value, playful fine dining experience where you can taste locally produced ingredients paired with white truffle and made with such care and packed so full of flavour that omnivores won’t even realise it is vegetarian.

Another highlight of visiting the festival is having the opportunity to take a white truffle home. It’s not cheap. White truffles have a price tag that reflects their rarity. Last season’s truffles went for €7,000 a kilogram – a high price thanks in part to the ongoing drought in Tuscany that meant fewer to go around. In a good season, however, they can cost half this, or even less (this season looks slightly better than last but it is still unseasonably warm and dry for white truffles, which are going for around €4,000-€5,000 per kilo). Luckily a little goes a long way and you only need five to 10 grams of white truffle per person for a good truffle dish.

First identify a good one. You should be allowed not only to look but to touch and smell, and if you aren’t, keep going until you find someone who will oblige. White truffle has a very smooth, thin, velvety, sandy-beige skin. A perfectly ripe one will be firm like a stone, not spongy at all, and will have a deep brown marbled interior and that intense, unique perfume. It should still be covered in dirt, which you don’t want to clean off until you are ready to use it (a gentle brushing with a soft toothbrush or nail brush and a damp paper towel will do the trick; don’t be overly zealous about cleaning as the skin is delicate).

Once you have a perfect white truffle, you want to use it at its freshest, when the aroma is strongest. If you must wait, it will keep for a maximum of five to six days when looked after carefully. Keep it wrapped in absorbent paper towel (change each day) and sealed tightly in a glass jar in the fridge.

Don’t think too much about what to do with a white truffle. Simple is best. It pairs well with something plain and even better if there is some fat to help carry the flavour. Eggs are ideal; so are fresh egg pasta, butter, cream or creamy cheeses such as ricotta, mashed potatoes or gnocchi. You don’t even need to cook it. Unlike black truffles, which benefit from cooking to bring out their flavour and do well turned into pastes or infusing everything from cheese to mortadella, white truffles’ flavour and scent are elusive. If you try to cook a white truffle you will destroy the perfume that makes it so prized. Simply shave it thinly over a dish right at the moment of serving: preferably it should be something warm to let the aroma waft up to your face – a truffle-infused steam bath for your senses.

Food & Drink
A Sicilian food masterclass amid the lemon groves 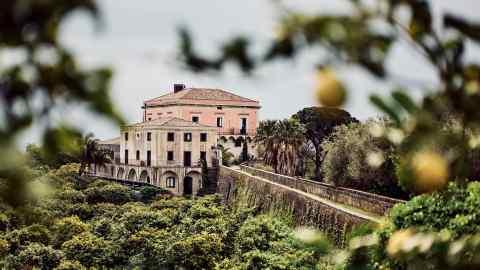 If you find you aren’t going to use it all at once but want to conserve it, make white-truffle butter. Gently melt some of the best unsalted butter you can get and grate (use a microplane for best results) the fresh truffle into it, off the heat. Add good-quality salt to taste if you wish. Pour into small glass jars and store the white-truffle butter in the fridge for up to several weeks. Butter preserves truffle perfectly and you have yourself one of the best condiments ever. Spoon your white-truffle butter into scrambled or over fried eggs, add to mashed potatoes, top a steak with it or simply spread it generously onto warm crostini and maybe drape an anchovy over the top. Then close your eyes, breathe in that special aroma and imagine you’re back within the 12th-century walls of San Miniato, surrounded by those secret, white truffle-harbouring woods.