David Cameron: I saw a world of darkness getting bigger and bigger

How do prime ministers pick their post-premiership priorities?

The day Tony Blair left Downing Street, he became a Middle East peace envoy, prompting speculation that, subconsciously or not, he was seeking redemption for the invasion of Iraq.

David Cameron’s primary, if not sole, public focus after his departure from office last year has been the fight against Alzheimer’s, leading to the widespread assumption that he had had a raw familial encounter with the disease.

But in a rare interview since his defeat in last year’s Brexit referendum, Mr Cameron brushed such speculation aside and instead harked back to his brief time as a backbench MP in the early years of the millennium, touring his Witney constituency.

“I just saw care home after care home in my constituency filling up with people with dementia who were entering a world of darkness, where they’d become completely disconnected from their surroundings, their relatives, their friends and their lives,” he said.

“And you could see whole new floors being built on to these care homes for dementia patients only. I used to go around them . . . It was meeting the 60-year-old daughter of the 80-year-old man who was in the care home, who didn’t recognise his daughter, didn’t know where he was, didn’t know what was happening to him. And this world of darkness you just saw getting bigger and bigger.”

Mr Cameron exuded his customary confidence and optimism in his London office, but these cannot be easy times for the 51-year-old former prime minister. He is excoriated by many of the 48 per cent of voters who backed “Remain” in last year’s referendum for calling it in the first place. He has also had to watch as his successor, Theresa May, has overseen a whittling down of the Conservatives’ parliamentary majority, while presiding over a mutinous and fractious Tory party and cabinet.

He now spends much of his time on his memoirs, due next year. But as president of Alzheimer’s Research UK, Mr Cameron believes he can follow through on his interventions as prime minister, when he pushed for radical improvements in care, called for special dementia “communities” and doubled public investment in research for a cure.

While he can no longer steer policy, he still has power as a convener, fundraiser and advocate. And for all of his failures to persuade Britons to stay in the EU, Mr Cameron was noted for his silky rhetoric as a politician.

“There’s a huge communications challenge. This is one of the things that attracted me to [the cause].

“So many people just think, well, dementia it’s just part of ageing; it’s just a natural thing that happens. It isn’t. Dementia is a set of symptoms, cognitive impairment and losing your memory and all the rest of it. But it’s caused by diseases of the brain.”

Since his appointment as president of the charity in January, Mr Cameron has brought together scientists, philanthropists and the pharmaceutical lobby to focus on early diagnosis.

“The problem with Alzheimer’s is that we think that when you start showing signs of it, it’s probably been in gestation for a very long time,” he said.

Mr Cameron is heartened by the tech entrepreneurs’ interest in the cause.

“There may be ways of finding fingerprints towards signs of dementia from the way you use your keyboard, or the way you use social media or the results of your Fitbit or what have you,” he said. “We don’t know where the cure’s going to come from, but it will almost certainly be made easier if we have early diagnosis.”

Fundraising for Alzheimer’s research has traditionally lagged behind that for cancer, partly because of greater public reticence over dementia, but also because the battle against cancer has scored marked triumphs, while the hunt for an Alzheimer’s cure has as yet failed.

“The glass half-empty is there isn’t a drug on the market at the moment that’s working,” he said. “We’re some way from finding a treatment. The pharmaceutical industry has sunk a lot of money into it and has now backed off a bit. The glass half-full version is that there’s an enormous amount of scientific research going on.

“It’s like HIV in the early ’80s. It looked like a death sentence. And the truth is that an enormous coming together did a huge amount of research and now you can live with this condition. That’s where we are.”

Is it not inevitable that cancer raises more money given the setbacks scientists have met seeking an Alzheimer’s cure?

“The analogy I use is that with cancer, for years, we were in the forest and we didn’t quite know where we were going,” he said. “We now see various pathways out of the forest….” With Alzheimer’s “there’s even more reason for the extra funding because we’ve got to get out of the forest”.

Burnt by recent setbacks, Wall Street has been wary of pumping money into the hunt for a cure. But Mr Cameron said we cannot expect pharmaceutical companies “to do it for us” and played down the idea that government incentives might encourage a fresh flood of private investment.

“I think some of the pharmaceutical companies would think we’re not close enough to get going. They will be very helpful . . . we have to recognise that if we gave a few tax breaks and sat back, it wouldn’t happen. We need more direct action . . . got to be governments, philanthropists, universities, science and great charities, like Alzheimer’s Research UK.”

He is confident that the UK has a particular advantage in the pursuit because the country can take advantage of the data generated by its free at the point of use National Health Service. He has also argued that his government’s doubling of government spending on dementia research made Britain a leading place for research and led the way.

In 2015, the then-prime minister set two especially striking targets: a personalised care plan for everyone with dementia by 2020, and a cure or modifying therapy by 2025.

Do the goals still stand?

“The clock is ticking but I think that was a good target,” he said. “In America you find people still saying, yes, we’re working towards that.”

Around the world, whether understanding the genetics, the trademark build-up of protein plaques on the brain, or the immune system, “there’s great work going on and breakthroughs will follow”, he said.

“The conditions are in place for a big philanthropic boost. People can see friends, and relatives and work colleagues descending into this veil of darkness and more and more people are worried about it themselves. We’re on track to have in a country of 60m people, a million people with dementia.

“The cost is already greater than cancer, stroke and heart disease combined. The willingness to donate is going up. We’ve got to make the most of it.”

Portrait and video of David Cameron by Charlie Bibby

Explore the series
READ MOREFT Appeal for Alzheimer’s research
David Cameron: I saw a world of darkness getting bigger and bigger 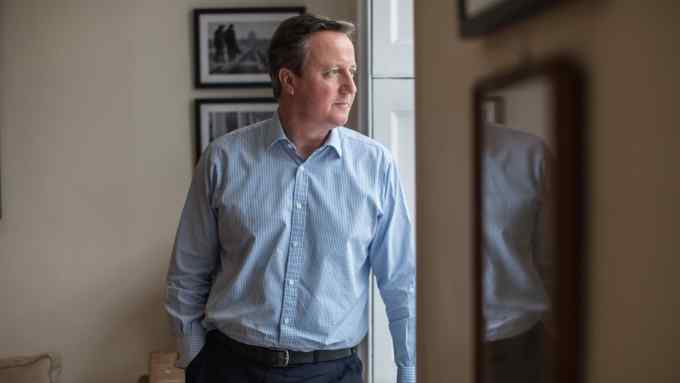