‘My sister had dementia. Now I face the same fate’

For our 2017 Seasonal Appeal, the Financial Times is raising funds to help Alzheimer’s Research UK carry out pioneering research to develop new treatments for Alzheimer’s disease and other forms of dementia.

It is difficult to know what Alzheimer’s feels like if you haven’t experienced it first-hand. To give human context to this worthy cause (which you can donate to here), readers from Ireland to Ecuador have been generously sharing their stories of living with the disease.

Last week we published a first collection, alongside stories from our own journalists. We will publish a final collection next week. If you would like to share your story, please do so in this form, or in the comments below.

Stories have been condensed and edited for clarity.

Both of my parents passed from Alzheimer’s, and now my brother, who’s 80, has been diagnosed. I am 75 and am starting to see the effects. I watch the research every day but have little hope for a cure in time for me.

[People may find it surprising] that memories from many years ago are sometimes very sharp, as though they happened only a few months ago. Give us time to think, even if you have to sit there for five minutes in silence. Many times we will remember, and I believe that it is good exercise for one’s brain.

My sister was diagnosed with dementia. It was horrible to see such a vital strong woman slip away slowly until she didn’t recognize anyone.

Now, as I sit here, I face the same fate. I have been diagnosed with Alzheimer’s after three mini strokes within two-and-a-half years.

My heart bleeds for other people who are already in the darkness, with no one to care for them or come to visit.

Always, always, respect your relative or friend for what they say and how they say it. And look into their eyes. If you have known them for a given length of time, they are still there. Never talk about them to others in their presence. They hear more than you know.

My late mother was diagnosed with Alzheimer’s. She had been caring for my father, who had vascular dementia. My father needed 24-hour care and was eventually moved to a specialist nursing home. The care was exemplary but my mother was bereft and visited him daily, often more than once. They were, to the end of my father’s life, like the twenty-something courting couple they’d been during the war.

Although my mother did become anxious at times, Alzheimer’s seemed to lessen her inhibitions (generally in a good way!). She shared hurtful things from her past with us, as well as a mellow philosophy of life.

She had always been a devoted reader of crime fiction and was herself a Miss Marple, observing, missing nothing. She didn’t completely lose this with Alzheimer’s. She would say something absolutely spot-on and then look at us as if to say, “You know I’m right.” When my sister and I would visit, she’d dissect events from the past with stunning accuracy, commenting on things she’d obviously thought at the time but had been too polite to say.

Unfortunately, she slipped into unconsciousness and, shortly afterwards, died. Some of the staff from her care home came to the funeral. They told us they had loved her.

I’d never have got to know my mother the way I did had she not had Alzheimer’s. We were very fortunate in that she knew who we were and showed us love.

I was 21 and had just finished university when my mom was diagnosed with Alzheimer’s. She was 53 years of age. It came to her aggressively, and in less than two years I saw how the disease took over her body and mind. At first she experienced anguish, sadness and depression, but eventually there came a moment when her worries went away and a kind of peace settled in. In that transition, I gave her all the love, care and understanding that she has given me all my life.

My Dad began suffering from Alzheimer’s disease 10 years ago at a tragically young age — he was only 59 when he was forced to retire.

As much as possible, you should treat the person as normal. Over the years, people had a terrible tendency to slip my Dad into the third person when they visited. On a holiday with family and friends a few years ago he said to me, “I’m not saying that anyone is trying to be malicious. It’s just an attitude. And it’s real.”

To anyone who is facing this disease for the first time, I cannot stress the importance of good support. Rely on the people in your life. Take them up on their offers. Familiar faces and familiar environments are hugely important for people with Alzheimer’s. People routinely calling to the house will make it easier for the primary carer to take vital breaks.

My sister asked me one day if I felt bad when Dad, in the midst of Alzheimer’s, repeatedly mistook me for his sister. “No”, I replied, because I was always someone he loved.

I walked beside him on his difficult journey through the Alzheimer’s years, and as he returned to his childhood I aged, until we were not only father and daughter but best friends.

To understand him, I followed his lead, sensitive to his perspective. Sometimes I was the lost one when I, perceived as his sister, could not recall the name of “that boy in the corner house that was crazy about you”. Often I experienced sheer delight: hearing about a memory never told to me as his daughter.

We had a good time in his childhood. The little moments mattered most: the broad smile when we went to the circus or a sigh of contentment when he had a root beer float.

We never knew how long we would have but somehow it didn’t matter. In the moment I knew I was doing all I could to show Dad how important he was to me, showing him he was loved, and being his companion on his journey home.

I cherish him even today. Though I have lost my best friend, heaven has gained a saint.

My mother was a language teacher. It was therefore ironic that her dementia took away all notion of language.

It crept up on her and after a while it gathered speed. She was transferred to a dementia unit in a nursing home. She spent most of the day staring through the window or sitting by the door, waiting for her sister, who had died a few months earlier.

Sometimes she looked in the mirror and said, “Look what’s become of me”. But on the whole, lucid moments were rare and very short. Luckily, death was kind to her and took her one day in the early hours of the morning. I saw her the evening before and as I was leaving she looked at me and smiled slowly.

Never ever give up on the person. The experience was very enriching.

My father was diagnosed with Alzheimer’s in 2001 aged 67. He was travelling with my mother and brother in Malaysia when my brother recognised a sign often associated with the disease: though he had an excellent sense of direction, he could no longer find his way around the hotel grounds. My mother later told us that, upon swimming in the Andaman Sea, he had an unutterable, almost childlike, air of contentment.

To us, this intellectual and deeply attentive man to some extent probably flourished. He adored his two granddaughters and showed a remarkable sense of play and joy with them. 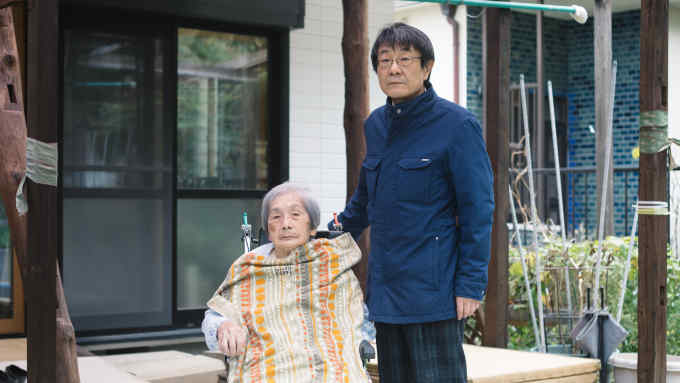