Britain’s departure from the EU is creating a deepening rift in London’s interest rate derivatives market, as traders send more of their deals to New York and Amsterdam.

In March this year, trades worth a notional £2.3tn in dollar, sterling and euro swaps contracts were redirected from the UK to legally compliant trading venues in America and Europe, according to data released by IHS Markit.

The swaps market — where deals worth more than $6.5tn a day are struck — is often used by investors to hedge against moves in interest rates and currencies. But it has been fractured since the end of the Brexit transition period in January created a stand-off between London and Brussels, raising costs for the banks at the heart of the market.

British and EU regulators insist that the banks and brokers they oversee must trade the most active, standardised swaps contracts on marketplaces in their own jurisdiction, or in countries that have been passed as having an “equivalent” standard.

After Brexit, however, politicians on both sides have wanted to bolster their financial services industries, so neither regulator has legally recognised the trading venues in each other’s market — even though their rules are virtually identical.

In Europe, we have seen in recent months just how quickly a lack of equivalence can cause liquidity to fragment

That has left investors and banks shut out from cross-Channel trading with counterparties in London, where most European derivatives trading used to take place. Traders have either been forced to use local markets or send their deals to US venues, known as “swap execution facilities”, because both sides deem American standards legally acceptable.

“In Europe, we have seen in recent months just how quickly a lack of equivalence can cause liquidity to fragment,” said Scott O’Malia, chief executive of Isda, the industry’s most influential trade group, at a recent conference.

Some trading in euro swaps that left the UK was “beyond what was strictly required by regulation”, reckons Kirston Winters, managing director of MarkitSERV, the derivatives trade processing arm of IHS Markit.

By April, about 16 per cent of the global market for trading euro-denominated interest rate swaps had migrated to US venues, compared with virtually nothing in December and 11 per cent in the first quarter, estimated ClarusFT, a UK data provider.

This early shift largely took place in the market, where participants such as investment banks trade among themselves — typically by using an interdealer broker as an intermediary to negotiate deals. They sit at the heart of the market and trade wherever prices are more competitive.

But IHS Markit found that the market for trading euro swaps between banks and fund managers, on venues in Amsterdam run by companies such as Tradeweb, Bloomberg and CME Group, was also beginning to ramp up in March, having observed little change in the first weeks after Britain’s full EU departure.

Winters suggests the delayed reaction may have been because UK banks were able to use an exemption from UK regulators to trade in the EU while they made arrangements to go to the US, as guided by the watchdog.

Even so, traders are seeing little difference in prices on their screens for the same swap traded in different countries, says Enrico Bruni, head of Europe and Asia at Tradeweb. “There are consistent liquidity pools between the various venues in cash markets, and we have seen quote and hit rates remain strong and consistent across all venues, with no discernible differences.”

However, a report by David Strachan, head of European regulatory strategy at Deloitte, suggests that this fragmentation and new inefficiencies have “considerably” raised costs for banks’ European operations — costs unlikely to be offset by trading in a market where interest rates were steady. Profits have dropped at some UK entities, while new or expanded EU entities are struggling to develop viable business models, he notes.

“This makes it difficult for some banks to achieve return on equity in Europe which meets their targets,” Strachan says. “Banks face some difficult decisions about how to reconcile regulatory and supervisory requirements with commercial realities.”

We acknowledge issues have emerged . . . as a result of Brexit. However, there are political constraints on the solutions

But the banks look increasingly like collateral damage in a UK-EU stand-off that shows little sign of changing soon. Senior EU policymakers have said there is “no rush” to look at the issue of equivalence, even if it creates short-term problems.

“We acknowledge issues have emerged in trading between EU and UK entities as a result of Brexit,” said Tilman Lüder, head of securities markets unit of the European Commission, at the Isda conference. “However, there are political constraints on the solutions.”

Officials in Amsterdam, the EU city that has been the biggest beneficiary of the upheaval, are now preparing for the long term. The Dutch Authority for the Financial Markets (AFM), the regulator, has invested in more supervision and surveillance of markets as it anticipates a sharp increase in the volume of trading and related reporting in the next year.

Hours before Britain left the European single market in December, the national regulator — the Financial Conduct Authority — gave UK-based banks some leeway, allowing them to trade certain EU client orders on EU venues. But the regulator stressed that traders could only use that option if alternative arrangements — such as going to New York — were not available.

It also promised a review of its post-Brexit stance at the end of March. On review, it concluded: “We have not observed market or regulatory developments in the first quarter of 2021 that justify a change in our approach.” With both sides far apart, New York may continue to profit.

This article has been amended since initial publication to reflect updated figures for swaps trading in March. 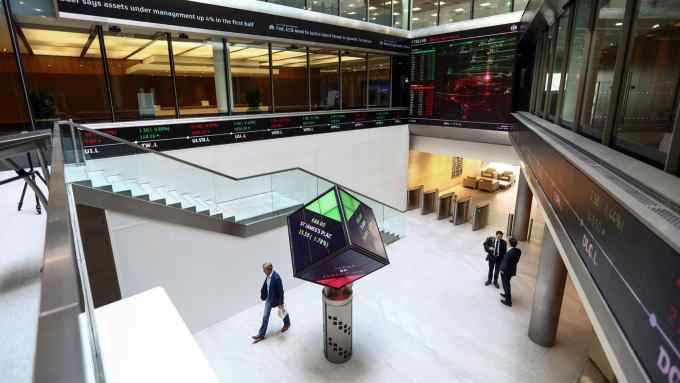