South Africa has fallen back into its second recession in two years, its budget deficit has ballooned to 6.8 per cent of gross domestic product, the widest gap since the end of apartheid, and its debt could be downgraded to junk status within a month.

It has run a current account deficit for 17 straight years and is struggling to even keep the lights on as rolling blackouts disrupt daily life. And that is before the fallout from the global coronavirus crisis hits its shores.

Despite these impediments, however, President Cyril Ramaphosa has said Africa’s most industrialised country will create its own sovereign wealth fund — traditionally the preserve of states with plump oil and gas revenues or external account surpluses to recycle.

In this, it is following in the recent steps of Egypt, Turkey and Senegal as countries that have set up sovereign wealth funds despite not having any obvious source of sovereign wealth.

“These are not countries with big oil windfalls as with the sovereign wealth funds in the Gulf, but it’s all about better managing state-owned entities within the government portfolio,” said Tim Ash, a strategist at BlueBay Asset Management.

As such, Mr Ash said, the likes of Egypt, Turkey and South Africa were attempting to follow the example of Singapore, which created Temasek in 1974 to manage the government’s stakes in telecoms, airlines, manufacturing and shipping companies.

“Singapore is the shining light in this area, the blueprint for others,” Mr Ash said.

The Turkey Wealth Fund was created in 2016 and seeded with the government’s stakes in a string of the nation’s biggest companies, including Turkish Airlines, Turk Telekom and two large banks, Halkbank and Ziraat Bankasi. It has an equity value of $33bn.

Egypt’s fund launched last year and is designed to take over the government’s stakes in sectors such as energy and real estate, and then to bring in foreign investors to help develop them further.

It has been allocated E£5bn ($318m) of start-up capital, with President Abdel Fattah al-Sisi having said it could expand to “several trillion pounds”.

The fund’s creation is, in part, a reaction to the privatisation drives of the 1990s and 2000s, which provoked a public backlash.

“It’s about making money, having a commercially oriented arm of the government,” said Charles Robertson, chief economist at Renaissance Capital, an emerging markets-focused investment bank, with the added advantage of “reducing the influence of the army”, which has expanded its business empire in recent years in the absence of private sector investment.

“It gets the army out of business,” agreed Mr Ash. “[Egypt] is trying to figure out a way to better manage state assets. The key problem going forward is growth, jobs and investment.”

He sees a sound rationale behind the approach. “Sometimes privatisation gets a bad name so that has become a difficult idea to do, but the people in charge do know that having a ministry running a business is not a good idea,” he added.

“All countries have portfolios of assets in enterprises and typically they are not managed particularly well. South Africa is a good case in point,” said Mr Ash.

He described the new-style SWFs as being akin to holding companies that can generate synergies between various enterprises by learning best practice, or by identifying poor management in some operations. They can also leverage up the structure by acting as a partner for foreign direct investment.

For instance, if Turkey wanted to build a liquefied natural gas terminal, the Turkish fund could provide the land and a foreign entity the money, forming a joint venture.

It is not always plain sailing, however. The Turkey Wealth Fund had something of a false start as it was beset by infighting between factions loyal to President Recep Tayyip Erdogan and the then prime minister. Mr Erdogan ended the infighting in 2018 by sacking the entire board and appointing himself chairman.

Mr Ash, who said the first iteration of the fund was “pretty disastrous” and “greeted by laughter”, now believes the fund has “credible” management under new chief executive Zafer Sonmez, who used to head the Turkey office of Malaysian sovereign wealth fund Khazanah Nasional.

Malaysia itself points to one of the potential drawbacks of the SWF approach, however, with $4.5bn allegedly having been embezzled from 1Malaysia Development Berhad, another state development fund, in the period up to 2015.

The greater threat might be political influence, however, said Mr Ash, with SWFs potentially “forced to get involved in projects that don’t make any sense”.

South Africa’s mooted fund has raised eyebrows in another sense. Tito Mboweni, the finance minister, has said it will be funded by royalties from petroleum, gas and mineral rights and a planned sale of broadband spectrum later this year, as well as the sale of non-core assets.

Given the country’s ballooning budget deficit, it is hard to see how the government can resist using such cash flows to help balance its own books.

Mr Robertson sees logic, however, arguing that Eskom, the crumbling state power monopoly, is “too politically sensitive” to sell, or to reform from within the government, so placing it in the middle ground of a state fund may be the best solution.

Mr Ash would like to see the state development fund model spread more widely still, with Ukraine top of his list. “Ukraine still has a fairly substantial stock of badly managed enterprises in state management and 10m hectares of agriculture land owned by the state,” he said.

“Given that privatisations have generally disappointed and the assumption that the state will remain a major shareholder in the economy for some time to come, Ukraine should think about it.” 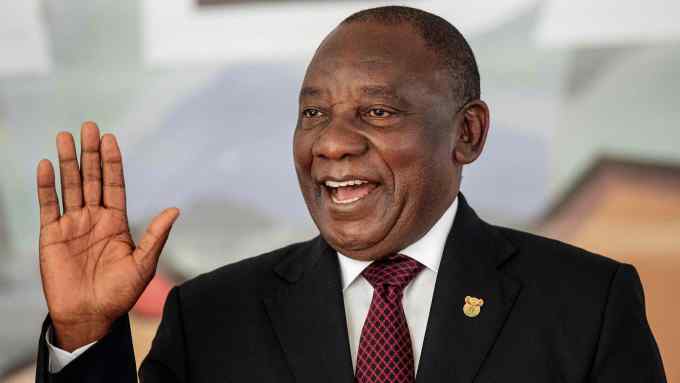