So where, when the dust has settled, will the UK end up? It will become Canada. It will have a trade relationship with the EU similar to Canada’s. It will relate to the EU in a way not dissimilar to Canada’s relationship with the US. It will remain a middle-of-the-road democracy, like Canada, and not become, as David Davis, secretary of state for Brexit puts it, a “Mad Max” dystopia leading a regulatory race to the bottom. Finally, like Canada, it can seek a modestly positive global influence.

Michel Barnier, the EU’s chief negotiator, has explained why the UK’s future trading relationship with the EU will be similar to that in the EU-Canada Comprehensive Economic and Trade Agreement, or Ceta. This agreement allows both sides to enter into separate deals with other partners. It also puts Canada outside the EU’s customs union and single market. Thus Ceta provides limited benefits to providers of services.

As Mr Barnier notes, the UK’s “red lines” — no jurisdiction by the European Court of Justice, no free movement, no substantial ongoing financial contribution, and regulatory and trade policy autonomy — preclude membership of the European Economic Area. These red lines also rule out an agreement similar to that with Switzerland. The UK’s opposition to ECJ jurisdiction and the demand for regulatory autonomy precludes an association agreement like Ukraine’s. The demand for an independent trade policy precludes even a customs union agreement, such as the one with Turkey. When everything impossible is ruled out, what is left is an agreement like that with Canada.

Mr Barnier is likely to be proved right. One reason for believing so is that he usually is. Another is that the red lines are deeply embedded in the UK. Malcolm Rifkind, a former Conservative foreign secretary, is correct to say that the UK is unlikely to accept an obligation to follow EU regulations without a voice in them. If it were prepared to do so, it would make more sense for it to withdraw its application to leave the EU.

The Ceta model would impose real economic costs. In particular, UK suppliers of goods to the EU would have to meet rules on local content, while British suppliers of services would lose existing favourable access. But to avoid these outcomes, the UK would need to change its red lines or persuade the EU to change its position on essential matters.

On the former, the UK might abandon its desire for trade policy autonomy in order to join a customs union agreement. It might accept free movement and so have an agreement similar to Switzerland’s. It might even accept a substantial role for the ECJ. But none of this currently looks at all likely.

On services, the government hopes for a process of “managed divergence”, in which new UK regulations are recognised by the EU as equivalent in aim, if not in detail, to the EU’s own. The EU is likely to reject this: it smacks too much of the UK’s having its cake and eating it; it would set a dangerous precedent; it would be complex to agree and monitor such divergence; and it would demand trust in the UK’s good intentions — a trust that its own debate makes hard to sustain. Too many laud the opportunity to eliminate burdensome EU regulation, without being precise on what needs to go.

Some in the UK believe the country’s financial services industry brings such great blessings to the EU that the latter should go out of its way to keep it inside the single market. That was easier to argue before the financial crisis. Moreover, access to UK-based wholesale markets would remain, even if UK-based suppliers lost “passporting” privileges.

The most likely journey, then, via a temporary standstill of up to two years, is to a Canada-style deal. True, that might leave the problem of the Irish border unresolved. It would also impose substantial costs.

The recently leaked UK government analysis concludes that, under such a deal, UK gross domestic product might be 5 percentage points lower than it would otherwise be, after 15 years — a loss of about a fifth of the potential increase in output by that time. In this respect, of course, the UK’s position is very different from Canada’s: Ceta benefits Canada; such a post-Brexit deal would harm the UK. But that is the result of the decision to leave.

Once outside, the UK would, like Canada, have greater freedom over its regulatory regime. But it is a safe bet that a bonfire of UK regulatory, tax and public spending commitments is not going to occur. In the UK, as in Canada, little support exists for such radical policies.

Again, like Canada, the UK will want to strike new trade deals. It will seek to join existing free trade agreements and create new ones. The difficulty here is that the important deals (with the US, China or India) will be tough and the easy deals (with, say, Australia or Canada) will be unimportant. Furthermore, the iron law of trade applies: other things being equal, trade halves as distance doubles. That explains why the UK is as important a trading partner to the EU as the US, and the EU, in turn, is the UK’s dominant partner. New deals cannot offset what it will lose. Moreover, contrary to views advanced by the Legatum Institute in London, the UK will not be the new leader in global liberalisation. It is not big enough for that.

The UK will still need a fruitful relationship with the EU. It is also more powerful, relative to the EU, than Canada relative to the US, partly because it has a bigger economy than Canada’s (almost twice as large) and partly because the EU is not a federal state with huge armed forces. But the UK will often find its neighbour frustrating and overbearing. The price of being an outsider will be palpable and permanent. But big choices have big consequences.

Sympathy between the regions will soon wear out / From Robert Holland, London, UK

Still hope of staying in a customs union / From Ben Bradshaw MP, House of Commons, UK

Get alerts on Michel Barnier when a new story is published 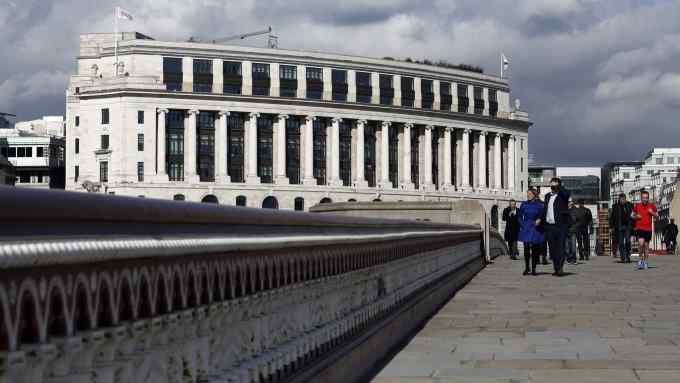 The drive for ‘global Britain’ is in focus this week. In Northern Ireland the border issue overshadows powersharing talks, while Unilever plans its likely retreat to Rotterdam. Here’s the best of our comment and analysis