When the World Economic Forum (WEF) assembled in Davos last year, the delegates were in shock. Donald Trump had just been elected as president of the US and Britain had recently voted for Brexit. Globalisation’s steady integration of trade, markets and governance is embraced as inevitable and desirable by most of the Davos crowd, yet the very idea seemed under siege in the Trump-Brexit era. Steve Bannon, who was about to enter the White House as Mr Trump’s senior adviser, had styled his ideological enemies the “party of Davos”.

A year later, the mood of the businesspeople, financiers, politicians and public intellectuals at Davos is likely to be rather different. Mr Bannon is now a non-person in the Trump White House. President Trump himself, meanwhile, is expected to speak at the WEF — the first time a US president has shown up since Bill Clinton in 2000.

Markets are setting new records, against a background of strengthening economic growth, which will doubtless mean many delegates arrive in the Swiss mountain resort in good humour.

The US president’s speech is set to be the forum’s centrepiece. Is he likely to decide this is the moment to make peace with Davos or play to his home base, reasserting his populist credentials by taking the fight to the global elite?

The sense that this is a genuine courtship of Davos is strengthened by the number of senior members of the US administration accompanying the president. They include Steven Mnuchin, Treasury secretary, and Rex Tillerson, secretary of state. Davos is already more relaxed about Mr Trump than it was 12 months ago, in large part because he has failed to deliver on some of his more incendiary pledges, such as imposing swingeing tariffs on Chinese goods. Mr Trump can also point to big cuts in corporation tax, which usually go down well with a business audience.

The WEF is keen to welcome Mr Trump. Co-opting “difficult” political figures is the name of the Davos game. An organisation that has in the past rolled out the red carpet for figures as diverse as the presidents of Russia and Iran is eager to embrace Mr Trump. Klaus Schwab, long-time WEF president, is an expert in extravagant flattery and Mr Trump is known to respond well to that.

An important factor in persuading Mr Trump to attend the WEF was that the star of last year’s Davos was China’s President Xi Jinping. Mr Xi took the opportunity to position China as the champion of free trade, telling a delighted audience that “pursuing protectionism is like locking yourself in a dark room”. The dig at Mr Trump’s “America First” agenda was clear.

However, the Chinese leader’s appearance at the Swiss mountain resort also sparked scepticism among multinational executives concerned about what many see as the growing difficulties of doing business in China. Over the past year, this feeling is likely to have grown. The 19th party congress in Beijing seems to have moved China to an increasingly personalised form of government revolving around President Xi. The “Made in China 2025” programme, focusing on the industries of tomorrow also worries western companies, which fear they will be competing increasingly with state favoured Chinese national champions.

Concern about Chinese business and trade practices potentially give Mr Trump an opening. If he can persuade the Davos audience that all he is doing is demanding a level playing field, he might get a positive reception. But his penchant for confrontational rhetoric means he could alienate his audience.

Those attending also want to understand exactly how Mr Trump intends to advance his trade agenda. If his administration decides to pursue China through the World Trade Organization, it might find support from the EU. But if the US looks as if it is trying to go around the WTO — or even actively undermine it — the reception for Mr Trump is likely to be a lot cooler.

China is not the only country the US president regards as “bad” on trade. He has complained about Japan, Germany, South Korea, Canada and Mexico. If he seems inclined to take on all-comers, he risks creating an anti-US coalition on trade.

Until Mr Trump decided to make an appearance, it seemed likely that the star attraction would be Emmanuel Macron, whose victory in May’s French presidential election was vital to shoring up the EU after the shock of Brexit.

President Macron is a former banker, who is committed to liberalising reform of the French economy but who also has “progressive” social attitudes. He is committed to deeper European integration and international co-operation on climate change. He is a graduate of France’s leading educational institutions and speaks fluent English.

In other words, President Macron ticks every Davos box. If, in a decade’s time, he finds himself out of power in France, it is not hard to see him propping up the coffee bar in the congress centre, as the head of a big corporation or international organisation.

The fact that the euro crisis has died down and that there is stronger growth in the eurozone mean Davos delegates are more optimistic about Europe than for some years. Even so, there are background concerns. The long delay in forming a new government in Germany has alarmed those who had hoped a Merkel-Macron partnership could relaunch the EU.

The politics of the other EU big four — Italy, Spain, Poland and the UK — are unsettling for the rest of Europe. Italy has an election in March, in which populist and Eurosceptic parties could make significant gains. Spain is in the midst of a constitutional crisis, with leading Catalan politicians still in prison, charged with sedition. The Polish government has been formally accused by the European Commission of undermining the rule of law. Britain faces 18 months of bruising Brexit negotiations and an uncertain economic future.

Events on the EU borders are potentially destabilising. The refugee crisis and the Ukraine conflict are subjects bound to feature in discussions. Vladimir Putin has kept away from Davos since 2009 but, with Russia about to host the football World Cup, it may be using this year’s WEF to gauge the scope for Russian rehabilitation, in the eyes of western business, after the diplomatic rupture and economic sanctions that followed the annexation of Crimea in 2014.

The WEF remains expert at creating the right mixture of excitement and earnestness required to convince delegates that they are truly shaping the world.

The idea of elite-driven globalisation, however, is much more contested than it was a decade ago. President Trump’s speech may well give a strong signal about whether the Davos era may be coming to a close. 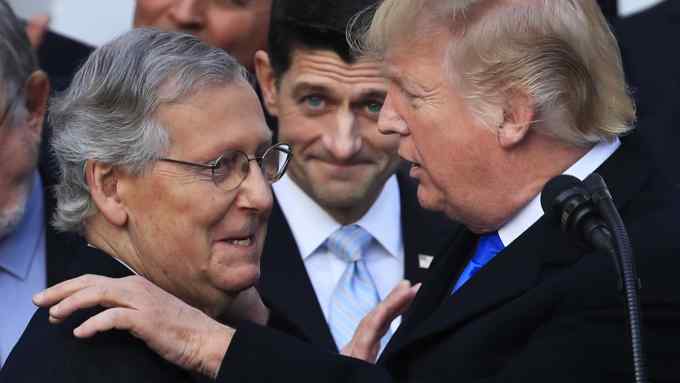 Opinion Focus: As the global elite gathered this week in Davos, US president Donald Trump touched down to set out America’s role in the world economy. Here is the best of our comment and analysis