It is known as the “vending machine problem” — where the appearance of a world-beating technological nation masks a country that retains some surprisingly low-tech ways.

While Japan is ahead of its rivals in robotics, factory automation and sensors for example, its banks and insurers lag behind in using information technology.

Laggard status may be manageable in finance so long as Japanese customers — a third of whom are over 65 — do not complain. However, for swaths of Japanese industry, government officials warn of a gap opening up with the US, Germany, China and South Korea.

The size and scope of Japan’s industrial economy mean it has more than one type of competitor: in autonomous driving, it is Germany and Silicon Valley; in internet-of-things machine tools, the rival is China, says the Ministry of Economy, Trade and Industry (Meti).

In this instance, Japan’s massed ranks of vending machines are one of the more uncomfortable examples. Of Japan’s 4.9m vending machines, 2.5m sell drinks. The industry’s trade association says that if these were networked it could gain a big-data view of how choice, price and impulse interact. Just 100 are net-enabled, says Fuji Electric, Japan’s largest producer. “The IoT is still very much in the development stage with our customers,” it says.

However, IoT capabilities in Japan took a step forward recently. In August, NTT DoCoMo, SoftBank and KDDI, Japan’s three largest mobile carriers, announced they would provide the country’s businesses with the telecoms backbone that will support IoT services.

Even the government says evolution must be faster. “Japan lags behind in virtual data, cloud data and related services. In Japan, there are no such companies as Google, Apple, Amazon or Netflix,” says Takashi Kono, a deputy director in Meti.

Government support for “catch-up” campaigns is a key element of Abenomics, the programme of economic revival launched by Prime Minister Shinzo Abe in 2013.

Financial technology is high on the list, but at the top is artificial intelligence and IoT.

One initiative involves Tokyo subsidising investment for start-ups and for researchers to develop the expensive semiconductors on which IoT and artificial intelligence depend.

In Japan, there are no such companies as Google, Apple, Amazon or Netflix

Japanese companies, especially those in consumer electronics, are keen to show they are behind the government. At the Ceatec 2017 trade fair in October, Sharp, Panasonic and Mitsubishi Electric showed off IoT home air-conditioners, ovens and baths.

Companies such as Komatsu, the construction machinery group, recognise that their equipment must be IoT-enabled to compete with Chinese and US rivals.

Komatsu already monitors its equipment to feed information to customers on the best routes around a worksite in changing conditions.

In October, NS Solutions, the Japanese IT services group, announced the creation of an AI development centre, 26 years after it became the first company to install AI — in a mill run by its parent company, Nippon Steel.

Chikai Tanaka, an analyst with Nomura Securities, says the focus will be on prediction models using machine learning, analysis of factory workers using IoT and smart machines that combine AI, IoT and robotics.

“Customer demand for AI is strong but we think it is difficult to make money from provision of AI solutions alone,” says Mr Tanaka — one clue as to why Japanese companies may be holding back from investment.

It is hard to escape the conclusion that Japan is lagging behind. The US has its Industrial Internet Consortium and Germany has Industry 4.0, but Meti’s first move was to form a study group to see how Japanese industry should enter and dominate IoT, Mr Kono says.

This recommended that the private sector set up its own forum, which, in turn, would tell the government the type of support it wants. Meti only started backing IoT projects about two years ago.

Some of the results appear encouraging. AI and IoT top the priorities in a recent Nikkei survey of budget-setting Japanese executives. Yet the same survey says that while 41.4 per cent of respondents believe competitiveness in research and development has improved since 2012, 38.3 per cent say it is flat or has fallen.

Mr Kono says the industrial internet has the potential to unlock what is arguably Japan’s greatest strength: the precision workmanship that drove economic growth in the 1970s and 1980s.

“Japan has high global competitiveness in workmanship, design and processing systems. We need to make this more competitive in a high-quality way. This is Japan’s strategy for the future.” 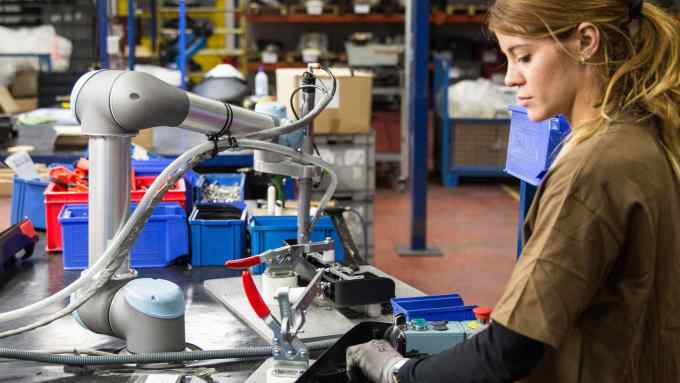