This April, in the overloaded schedule of events that makes up Milan’s annual design week, a proliferation of bubbles in a darkened room quickly moved to the top of visitors’ must-see lists. Queues formed outside the 1930s former cinema where “New Spring”, an installation by London-based Studio Swine, was being shown. As the branches of a six-metre high “tree” in recycled aluminium dispensed the slick, translucent bubbles, the atmosphere was one of quiet contemplation — and carefully art-directed selfies. Time seemed to go more slowly as the bubbles grew and fell (one every five seconds) and broke into clouds of mist on contact with human skin.

This week, a slightly bigger version of “New Spring” will come to Miami, sited in the Art Deco interiors of Temple House, a razzle-dazzle piece of residential architecture by Lawrence Murray Dixon. His buildings on South Beach’s famous 1930s development include the Raleigh and Marlin hotels.

Ever since James Turrell invited us into his “Skyspaces”, Carsten Höller filled Tate Modern’s Turbine Hall with slides and Random International’s “Rain Room” lured us to walk drily among the raindrops, it seems that we can’t resist being part of the artwork. The “Rain Room”, now in the permanent collection of the Los Angeles County Museum of Art, drew some 190,000 visitors in 15 months, and had an equally successful run at the Yuz Museum in Shanghai. “Those ticket sales are remarkable,” says Mollie Dent-Brocklehurst, who set up a division at blue-chip gallery Pace in partnership with the cultural agency Futurecity, called Future/Pace, to deal with such large-scale environmental works. “They can turn into a good investment.”

These multi-sensory experiences, delivered via some deftly programmed technology, cross the boundaries of art, design and architecture. Exceptional, experiential and forward-thinking, they are often initially sponsored by brands who’d like to own those values, too. American furniture company Restoration Hardware delivered the first “Rain Room”, and the clothing company Cos enabled “New Spring”, in a partnership entitled COS x Studio Swine. “We’re interested in functionality, and tactility, but a bit of magic too,” says Karin Gustafsson, creative director at Cos.

We’re not environmental campaigners, but we want to engage with the world we live in through our work

Studio Swine (which stands for Super Wide Interdisciplinary New Explorers) consists of Japanese architect Azusa Murakami and British artist Alexander Groves, who met while studying at London’s Royal College of Art (RCA) in 2010 and got married in a post office in Nagoya three years ago. The work they’ve made in the past seven years is an unlikely blend of ecological earnestness and flights of fantasy.

At the RCA, they worked out how to make spectacle frames using human hair, bought at London’s Ridley Road market, and biodegradable resin. Later they went to Shandong province in China to track down the factories where the hair is processed — “a bit like going down the Silk Road”, says Murakami. They found them in village after village where bikers in black leathers came and went with hair-stuffed backpacks. They travelled to São Paulo, set up an outdoor foundry heated with waste cooking oil, and made furniture in the street, pouring recycled aluminium into sand moulds. When they left the foundry, they gave locals a manual so that they could continue the process.

They don’t have a studio, but thrash out their ideas in a tiny flat in Bethnal Green, east London, then find people to produce them. “We want to stay flexible and small, we want to keep moving,” says Groves, whose graduation project, the “Sea Chair” series, used waste plastic dredged out of the ocean. “We’re not environmental campaigners,” he continues, “but waste plastic is a problem of our times, and we want to engage with the world we live in through our work.”

At the moment, a huge “breathing” ceramic sculpture for the Eden Project in Cornwall is being fabricated in Blackburn. Though the sculpture will, they say, be the biggest of its kind in ceramic, it celebrates one of the tiniest of organisms — the cyanobacteria which is a critical part of the ecosystem. “They are the basis of our life system, and we’re killing them off with micro-beads of plastic,” says Murakami. “If we could just ban plastic straws and cutlery, it would start to make a difference,” sighs Groves.

They say that “New Spring” was developed as a response to the city of Milan, the elegant arches of its gallerias and the blown glass of its lighting, although its organic form, which suggests both art and industry, will have an effortless dialogue with the dramatic white arches of Temple House’s own façade. Its function, say Studio Swine, is simply to create a moment. But when you watch one of those surprisingly weighty bubbles burst in your hand, you can’t help but think of the fragility of the world we’re living in.

Explore the series
READ MORE
Arte Continua Habana: how to run an international gallery in Cuba 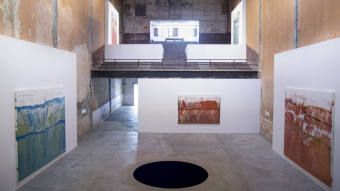