The reason? The entire thing was also a film set; on September 20, the event will premiere via Amazon Prime Video. Badgalriri, as the singer is known on Instagram, and her producers, would have no shoddy social media footage tainting their much buzzed-about mega-project.

Unexpectedly, the no-mobiles policy added to the intimacy of the theatre. An austere set featured colourless blocked buildings (one of which mimicked the Palazzo della Civiltà Italiana in Rome, which serves as the headquarters for Fendi; Fendi and Fenty’s ready-to-wear and beauty components are both backed by the luxury conglomerate LVMH). These monolithic edifices were then lit in rainbow lights and laser beams as performances by Halsey, Migos, DJ Khaled, A$AP Ferg, Fat Joe, Tierra Whack and more ensued. They were also populated by dancers, all wearing Savage x Fenty, in an expansive representation of body shapes, genders, abilities and skin colours. It was the most all-inclusive, body-positive show this writer has ever witnessed, by miles.

It was made all the more powerful by the explosive energy afoot (this was far better than Kanye West’s huge, music-fuelled fashion shows of yester-season, but not quite as sharply done as Beyoncé’s Coachella 2018 masterclass). The dancers significantly outperformed the actual musicians, but one got the sense that this is what Rihanna wanted.

It was like a reverse Victoria’s Secret show; yes, Joan Smalls and Gigi and Bella Hadid are supermodels that embody the established expectations of beauty. But the more beautiful and optimistic takeaway at Savage x Fenty was that the crowd actually cheered louder for the dancers (female, male, non-binary, trans, plus-sized, ultra-thin, and more) that were hair-flipping, twerking and strutting with bristling confidence. Earlier on Tuesday, at a press conference ahead of his own fashion show, the designer Michael Kors said that beauty is being viewed and understood in an entirely different manner, more than ever before. That rang acutely true in Brooklyn.

And the lingerie? You can see it now and buy it now, on Amazon, of course.

Optimism is the word of the week here in New York. In fact, two other designers employed the phrase backstage at their respective shows on Tuesday. One was Coach’s Stuart Vevers, who has been with the label for six years. Six! That’s half a lifetime in the industry’s current tendency for rapid turnover in creative direction (though this practice seems to have slowed down of late).

Vevers’ aesthetic at Coach is well-established. He has a deft way of taking loftier runway concepts and conceits and whittling them into more versatile looks: as Coach is not a designer brand, it must appeal to wider tastes. This time he took an ’80s graphic punch and coated it with a future-glancing techno gloss. “It’s new-new wave,” he said. “This company didn’t have a fashion line before five years ago. So it’s kind of what I’d imagine Coach would look like in 1981, mixed with 2020, and I wanted to show optimism.”

Leather pieces — for both women and men — enticed. Trousers were fitted and shaped; trenches had appealing contrast belting. Barbra Streisand’s face appeared on jumpers. So did a crayfish! Notably, 78 different handbags, remade and reinterpreted from Coach’s archives, were carried throughout. That may well be a world record for the most amount of carriers ever put forth at a fashion show. The neo-nostalgia came together; this show was slightly weird, in a good way, and it left the viewer with an encouraging feeling.

Gabriela Hearst was also thinking about “optimism” as well as “courage”. From panelled-together dresses with fine embroideries of recently extinct insects to knit cashmere bags, Hearst managed to bind together an ambitious pool of references (which also included Kurdish female fighters, the goddess Athena, and geodes).

Her research was certain, as was a sense of responsibility: Hearst’s show was net carbon zero. She had every branch of the operation monitored, and will offset whatever emissions the event let off. If that’s not a hopeful action and sentiment, then what is? 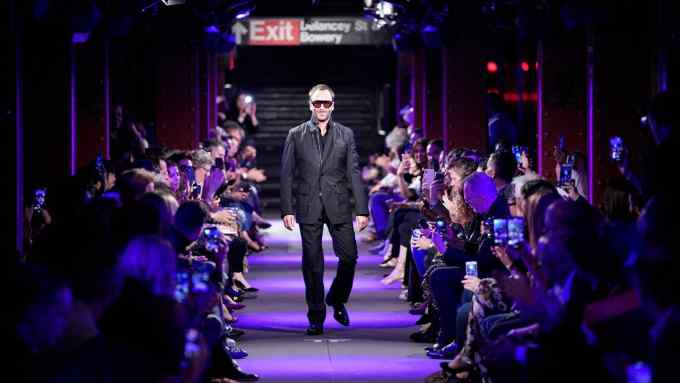