From beautiful simplicity to ultra-sexy, two very different brands play to their strengths

Luxury in the designer fashion-scape is ultimately subjective: one person’s save-up-for coat is another’s wouldn’t-touch-it-on-the-sale-rack rag.

But there are some traits around the term that are steadfast. Ultra-high quality materials and production methods, impenetrable confidence in taste and (usually) multiple figure price tags constitute what it is to be luxurious, at least in this arena.

It does not sound especially hard to achieve, but few American labels are referred to — and believed in as — true and competitive global luxury brands.

On this rarefied plane, The Row, from Ashley and Mary-Kate Olsen, and Tom Ford are established contenders. Both revealed their spring collections on Monday at New York Fashion Week.

See: a zip jumper, perfectly cut outsized shirting, Bermuda shorts and a boxy white crocodile jacket at The Row.. Their evening options, including dresses in pieced-together amorphous cutouts, did not persuade quite as soundly. But, no matter, these became a backdrop to the genuinely beautiful simplicity the Olsens unveiled. But this is the sisters’ modus operandi and their strength; the Row, time and time again, has put to market the premise of the luxury wardrobe staple.

And, The Row is a success story. The company introduced menswear a few years back, an ecommerce platform this summer, and will soon open their third brick-and-mortar store in London (their art and furniture-laden New York and Los Angeles properties have become destinations in and of themselves, even for passers-by). Experts estimate that the brand rakes in between $100m and $200m in sales annually. It is carried in almost 100 retail points around the world.

On the opposite aesthetic end of the US luxury spectrum, there’s Tom Ford, who sent his skin-baring, sculpted top-wearing models down the steamy corridor of a disused subway station on Manhattan’s Kenmare Street. The insurance bill alone to get that many people into such a space was likely, yes, a luxury few could afford. But Ford can; his 13-year-old eponymous label makes about $2bn in yearly sales. He is an industry powerhouse — to note, he was recently appointed as the new head of the Council of Fashion Designers of America — and he has a taste level that some no doubt find questionable, but is all the same rather brilliantly intransigent.

Ford’s luxury promise is always palpable — his quality is superb, his conviction essentially oozes opulence, and the entry point to buy his brand is out of reach for many.

Yet what keeps him in a league of his own is that he has a way of inverting the clichés of luxury and making them aloofly sexy. One did not emerge from his tube station feeling impassioned. Rather, it was a sensation along the lines of supremely assured. Ford’s luxury message is that, if you can, it’s more than OK to indulge.

Explore the series
READ MORE
Why is everyone dancing at New York Fashion Week? 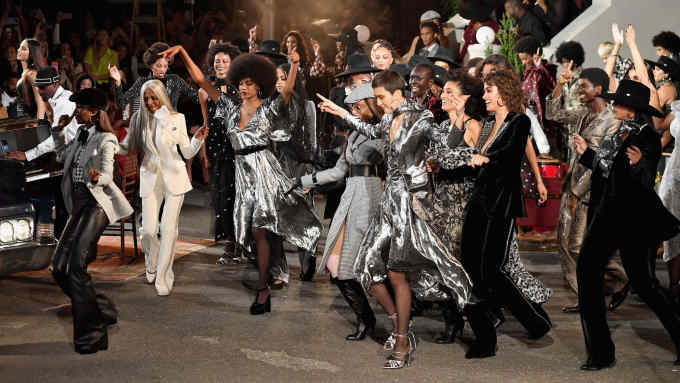