Amanda Wang’s family businesses — a call centre and two restaurants in Beijing — are grappling with a plunge in revenue following the coronavirus outbreak. She imposed a company-wide 30 per cent pay cut on about 120 workers in July even after receiving tax cuts and employment subsidies from the government designed to help companies survive the pandemic.

“My biggest challenge is a lack of business and policy support [from the government] isn’t helpful [on this],” says Ms Wang, referring to her decision to cut workers’ salaries. “I have to make savings where I can.”

Yet Ms Wang had no qualms about renewing her annual Rmb150,000 ($21,000) membership at a downtown beauty salon in the Chinese capital. “I am not going to cut corners on my basic needs,” says the 41-year-old, who in July sold one of her six apartments in Beijing for a profit of Rmb3m. “There are ways to make up for the income loss.”

Li Erping, a waiter at one of Ms Wang’s restaurants, has far fewer options to make up for his lost earnings. He used to spend Rmb1,200 a month on a special protein diet and exercise. But he had to abandon that in July after the pay cut was imposed.

“This is the most difficult period of my life,” says Mr Li, who spends most of his reduced Rmb3,500 monthly salary on his son. “I am saving every penny I can to support my family.”

The contrast between the two Beijing residents highlights China’s unbalanced two-speed economic recovery. While the nation’s wealthier citizens have so far emerged largely unscathed financially from the pandemic, many on low incomes are struggling.

The uneven recovery in consumer spending has raised questions from low-income workers to economists and analysts about the way the Chinese government has responded to the pandemic. While many countries have tried to directly transfer cash to consumers to protect businesses, Beijing has focused much of its effort on stimulating investment and construction. And, say critics, when it has adopted consumer-led measures — including approvals for new duty-free shops — they have benefited the well-off, rather than average, households.

So, although the IMF forecasts growth of 1.2 per cent for China in 2020 and above 5 per cent a year between 2021 and 2025 — well ahead of any other major economy — some question whether that return to growth will benefit those lower income consumers that Beijing needs to start spending.

Domestic consumption — which accounted for 57.8 per cent of growth in gross domestic product in 2019 — had become a significant factor for the world’s second-largest economy even before China’s trade war with the US darkened the outlook for exports.

“Government policy has failed to narrow the rich-and-poor gap that widened following the virus outbreak,” says Wang Jun, a researcher at the China Center for International Economic Exchanges, a government think-tank. “This will put a lid on overall consumption recovery as the low-income population far outnumber high-income ones.”

The nature of the rebound in the Chinese economy — which came out of its national lockdown several months before most other countries — has implications for governments around the world as they try to reopen. Beijing has many tools at its disposal to stimulate demand and boost production, but even China has struggled to get many consumers to feel confident enough about the future to spend.

“The government can decide on how many roads and bridges to build,” says Zhuang Bo, an economist at TS Lombard, “but it can’t control how much average households want to spend.”

The recovery in high-end consumer spending began as soon as the economy began to reopen in some cities in March. More than a dozen luxury western brands, ranging from fashion houses to carmakers, reported double-digit revenue growth in China during the second quarter of this year compared with 12 months earlier, just as sales in other parts of the world sank.

A study by Savills, the commercial property broker, found that footfall last month at high-end shopping malls in three of China’s top five cities had returned to, or exceeded, pre-virus levels.

LVMH, the luxury fashion group, saw a more than 65 per cent jump in revenue in China in the three months to the end of June. Jean Jacques Guiony, LVMH's chief financial officer, told analysts in July that the performance provided “a very good offset . . . for the rest of the business, which is suffering”.

Car sales — anaemic over the past two years due largely to the country’s economic slowdown — have also rebounded. Luxury car sales grew more than a quarter in May and June compared with the same period a year earlier as rich buyers returned to the showroom. In Shanghai, where sales of high-end vehicles almost doubled in the second quarter of this year from a year earlier, dealerships said they trimmed or suspended discounts thanks to stronger demand. “Our business is better than normal,” says the manager of one BMW franchise in the nation’s commercial capital.

The momentum is showing little sign of easing in the third quarter. Sales at the luxury fashion brand Prada surged more than 60 per cent year on year in July following a more than 50 per cent jump in June. So strong is the demand that several stores in Shanghai’s IFC mall — from Gucci to Dior and Hermès — have begun limiting visitor numbers, not as a Covid-19 precaution but to improve the “customer experience”.

Per capita consumer spending by urban residents — mainly low to middle income groups — fell 6.2 per cent in the second quarter of 2020 following a 9.5 per cent drop in the first three months of the year, according to official data.

The fall in spending is especially pronounced at the bottom of the ladder. A study by Shen Jianguang, chief economist at JD Digits, a Beijing-based fintech group, shows per capita online spending by low and lower-middle income households declined in the first half of this year even as overall ecommerce revenue picked up.

“Poor people are bearing the brunt of the economic downturn,” says Mr Shen, who estimates that unemployment among low to middle-income adults is more than twice the national average of 5.7 per cent.

The uneven recovery in spending highlights what is already a growing income gap. A survey of more than 5,000 households in June found high income respondents — making more than Rmb300,000 a year — earned more in the second quarter, year on year, while the rest of the population made less. Those earning less than Rmb50,000 suffered the biggest fall in income.

The reason is simple. Most high-income Chinese managed to keep their jobs or businesses by working from home during the pandemic. These households also benefited from Beijing’s credit easing policy that sent equity and housing markets, in which they have big stakes, soaring.

In contrast, income growth has stalled or even turned negative among the hundreds of millions in the low to middle-income population as the pandemic took a toll on the jobs market. Official data show China’s urban residents — the vast majority in the low to middle-income categories — reported a 2 per cent drop in per capita disposable income in the first half of the year.

The situation could deteriorate further as job losses have begun to mount. A survey in June by Peking University of more than 5,000 urban residents, who were employed at the start of the crisis in December, found that 11 per cent had lost their jobs and 10 per cent had zero or an inadequate workload. That stood well above the official unemployment rate of 5.7 per cent in the same month.

“A majority of jobless workers are likely to fall into poverty as they have been without any income for six months,” warned Zhang Dandan, author of the PKU study in the report.

The two-track economic recovery is undermining Beijing’s efforts to revive growth even as China emerges from the virus-driven downturn faster than other major economies.

The country’s swift recovery — there was a 3.2 per cent pick-up in gross domestic product in the second quarter — has largely been powered by an increase in credit-fuelled investment in infrastructure and real estate, a policy response that adds to China’s high debt burden. But domestic consumption is struggling to pick up the slack. The shopping spree by the rich will not offset the spending cuts by the rest of the population. As a result, China’s retail sales have fallen for five months in a row since the pandemic began to spread nationally in February.

One way Beijing has sought to reverse this is to adopt a mass, free-of-charge Covid-19 testing programme designed not only to root out non-symptomatic cases, but also to inspire economic confidence.

Wuhan, once the epicentre of the virus, tested 10m out of its roughly 11m population in 19 days in May, using pop-up test sites to take throat swabs and an army of district government staff to contact residents. The efforts, which cost Rmb900m, diagnosed 300 asymptomatic cases. Some public health experts questioned whether the expense of mass testing could be justified, but economists were in no doubt about the benefits.

“The mass testing is not only about building confidence, but also [identifying almost] all Covid-19 carriers rapidly and effectively,” says Ning Zhang, senior China economist at UBS in Hong Kong. “[It] saved the opportunity cost of locking down the economy.”

Guo Bin, a Beijing-based hotel worker, says he felt more comfortable with going to work after the city tested 12m people following a cluster of cases linked to a seafood market in June. “Both my job and myself need the test,” says Mr Guo, 30. “Everyone wants to feel at ease.”

Yet, while mass testing has benefited the entire population, other policies were designed specifically for the rich. To boost high-end shopping, approval was given for new offshore duty-free shops on Hainan Island. Official data show sales at these stores more than tripled in July from a year earlier as wealthy consumers — unable to travel abroad because of Covid restrictions — flocked to the southern island for bargains.

Yet government policy has done much less to help low-income groups, say economists. China bolstered businesses, with measures ranging from tax cuts to employment subsidies, to prevent mass redundancies. But the policy has not always been applied as intended as the subsidies have been used to soften the blow of falling revenue growth by some companies.

Every province provides direct subsidies, such as unemployment insurance, to the poor. But the amount is often too small to make a difference. Making things more difficult, most cities only make unemployment benefits available to local residents — those eligible for hukou, the household registration permit. Most migrant workers will not be hukou holders and are therefore ineligible for benefits, even though they are more likely to face lay-offs amid the economic downturn.

As a result, official data show that just 2.1m adults had claimed unemployment insurance by the end of June, down from 2.3m a year earlier, despite the pandemic. However, the PKU study suggests that more than 60m Chinese workers — about 7.5 per cent of the working age population — had no job by the middle of that month.

“How do you expect consumption to pick up when a big part of the population has neither jobs nor social benefits?” asks Mr Zhuang of TS Lombard. Mr Zhuang expects demand to continue its tepid recovery for the rest of the year as Beijing’s policy priority is beefing up investment. “A real economic recovery should benefit all income groups and China has failed [on this front],” he says. 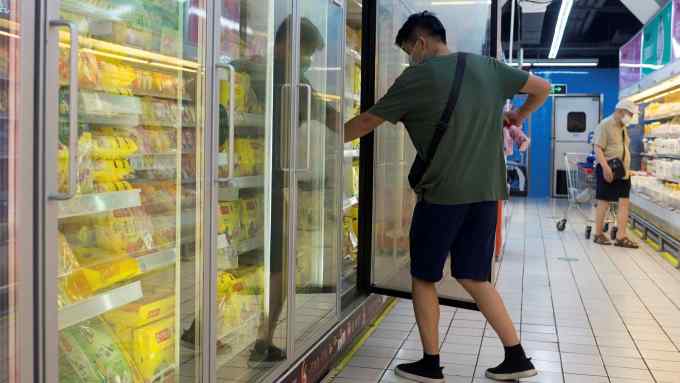