In early March, as angst about Covid-19 was growing, Layth Hishmeh remained unconcerned. At 26, having never been seriously unwell, he felt pretty confident this new virus would barely affect him and would even joke about it with colleagues.

Then he caught it. After recovering from the initial fortnight of coughing and fever, he collapsed on the street while out shopping. For the next four months he has been ambushed by a baffling array of symptoms, including extreme fatigue, a foggy brain, a raised heartbeat and diarrhoea.

“I couldn’t sit up for about one month, and then I couldn’t get myself to the bathroom for another month,” he said. “I’m not doing so well on the mental front at the moment, it’s traumatising.”

Mr Hishmeh, who lives in Camberley, Surrey, is one of tens of thousands of people worldwide who have reported severe fatigue and other, apparently uncorrelated, symptoms for months after contracting Covid-19.

Referred to as long-haul Covid, longcovid, or tentatively by the medical community as ‘post-Covid syndrome’, this poorly understood condition is being closely associated with chronic fatigue syndrome, or myalgic encephalomyelitis (ME). But it has already become mired in some of the controversies that have dogged that illness for decades.

As a growing number of sufferers from around the world have turned to online support groups on Facebook, Twitter and Slack, researchers are now trying to determine the cause and how it might be treated.

Recent analysis by the Covid Symptom Study suggested that as many as one in 10 people with Covid-19 have been sick for more than three weeks after symptoms first emerge. Some of the most pernicious problems faced by the group of long-haulers are chronic fatigue, high temperature, insomnia, headaches, brain fog, tingling sensations and dizziness.

“People are stuck in bed and they’re not able to go to work or look after their kids,” said Timothy Nicholson, a neuropsychiatrist at King’s College London who is studying the phenomenon after suffering from post-coronavirus symptoms himself.

Cesar Abreu, a dancer with the Metropolitan Opera in New York City, has found the effects of his protracted illness completely debilitating. The ongoing fatigue, coupled with crippling migraines and pain in his chest, have led to several panic attacks.

“What worries me the most is the permanence of the virus, the lasting impact it might have had to my body and that I might stay like this, experiencing physical symptoms, without any resolution,” he said from his home in Manhattan.

Paul Garner, a professor of infectious diseases at Liverpool School of Tropical Medicine who has been blogging about his post-coronavirus symptoms for the British Medical Journal, wrote last month: “I am unable to be out of bed for more than three hours at a stretch, my arms and legs are permanently fizzing as if injected with Szechuan peppercorns, I have ringing in the ears, intermittent brain fog, palpitations, and dramatic mood swings.”

One of the problems faced by long-haulers is that they did not take a coronavirus swab test during the early stages of their illness, in part because the government had halted testing and tracing in the community.

This has led to difficulties drawing a definitive line between Sars-Cov-2 and the symptoms reported, and has meant that several individuals have not met the criteria for clinical trials.

The causes of the reported symptoms are unproven and contentious. While some point to post-viral syndrome — tiredness and weakness that lingers after a person fights off a viral infection — as a likely explanation, others are adamant that what they are suffering has unique characteristics.

“There’s pathology here that’s not being investigated,” said Clare Rayner, a consultant in occupational medicine in the UK, pointing out that it seems to affect people’s brain, heart and lungs for months.

Video: How to spot a local coronavirus outbreak from data

John Geddes, professor of epidemiology at the University of Oxford, believes that protracted illness is likely to be caused by the virus getting into the nerve cells of the brain. Others suggest that an elevated immune response to the virus may be damaging the cells in key parts of the body.

Covid-19 would not be the first pandemic to generate debilitating symptoms well beyond the infection period. Following the 2003 Sars outbreak in Asia, researchers found that 60 per cent of patients had post-viral fatigue and insomnia one year after contracting the virus.

The Ebola outbreak in west Africa in 2014 led to the identification of a unique “post-Ebola Syndrome”, which shared some symptoms with chronic fatigue and lasted up to two years after infection.

Post-viral syndromes are already mired in controversy. For decades, people suffering from chronic fatigue have felt their illness has been dismissed by medical professionals as psychological rather than physical ailments. Death threats have been sent by members of the ME community to academics espousing therapeutic treatments for the illness, according to one expert in the field.

“We’re trying to ensure we don’t get a schism between mental and physical health this time but we’re still struggling with that legacy of dualism,” said Dr Nicholson. “Lots of people feel that their symptoms aren’t believed.”

Mr Hishmeh is one among many of these patients. He said he has felt completely unsupported by doctors throughout his illness, with several saying he was suffering from mental health problems and prescribing him anti-anxiety medication.

The Royal College of GPs has called on the UK government to provide additional funding to help tackle the problem. Members of support groups have also written to the government demanding more research and improved medical support for sufferers.

“The government has to wake up and realise we might be dealing with a really big problem here, affecting hundreds of thousands,” said Ondine Sherwood, who contracted Covid-19 and has been suffering from fatigue and fever since the end of March. 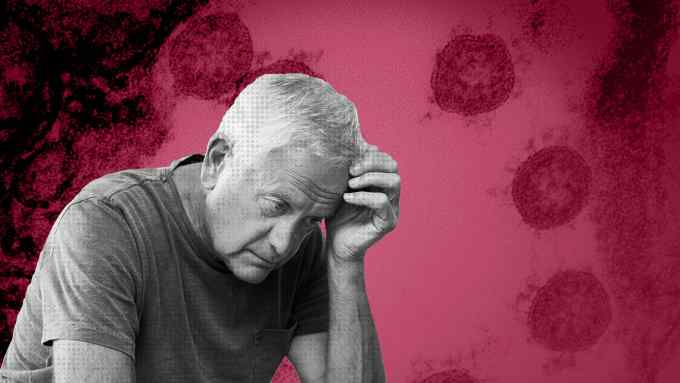