Brexit sets Britain on a stable path of relative decline

An under-fuelled plane in the middle of the ocean will appear, to any seafarers looking up at it, a picture of stability. It does not drop from the sky so much as glide to its fate somewhere over the horizon. Depending on the candour of the pilot, even the passengers will take a while to realise their vessel is in mortal distress.

Politics does strange things to language. Having perverted the neutral-to-pejorative word “radical” to mean good, it has done something similar to “stable”. Theresa May campaigned for a stable Britain as prime minister. Businesses are said to need stable government above all else, as though advance notice of a 99 per cent corporate tax rate for the next decade would leave them inconvenienced but thankful for the certainty all the same.

There is such a thing as bad stability. Gradual decline is its most insidious form. Since Britain voted to leave the EU, it has not suffered the disaster that some pro-Europeans and neutrals expected. There was no recession or capital flight. Nor can they mount the intellectual defence that Britain is yet to leave, as most of the predictions of immediate economic shock hinged on the referendum result rather than the formal exit.

The Eurosceptic error is to take much comfort from what has transpired. Britain is growing more slowly than the eurozone. In the Office for Budget Responsibility’s vision of life after exit — the most measured I know — the economy underperforms an imagined future under EU membership without tipping into a death dive. Relative rather than absolute decline.

Imagine a Britain that misses out on tenths of a percentage point in economic growth, year after year. Businesses go uncreated. Investors commit their marginal pound elsewhere. Financial services are on-shored to the continent in small parcels. Just as slowly, old rigidities in the labour market and in industry that were banned under European law start to return. Wunderkind graduates from around the world consider Britain but make their careers on the continent, North America and Asia instead. At no point will any of this feel like a crisis but, over a generation, the build-up of little failures amounts to the same thing: a diminished country, perhaps with a single concentrated reckoning at the end.

If this reads like speculative dystopia, remember that Britain is already steeped in imperceptible decline. In the three decades after 1945, the UK was not a disaster zone. It just consistently underperformed most of western Europe. Its growth was a bit lower, its policies a bit worse. At no point did this deterioration manifest in an emergency (the 1967 fall in the pound aside) but it ended with the world’s first industrial power asking the International Monetary Fund for help and its own electorate to decide whether politicians or trade unions held the right to govern. More painful was the sense of clear though not vertiginous inferiority to nations that were gallingly nearby. Only then did Britain get the Thatcherite defibrillator out and shock itself into recovery.

No one wrote a version of Guilty Men about the decades that led to Britain’s humbling in the 1970s. Next to the prewar complacency about Adolf Hitler, the stakes were lower, the culprits too dispersed, their mistakes too subtle and various. The thing about gradual decline is that those responsible for it tend to escape blame. A proper crisis throws up more obvious villains. It also gives you a chance to notice the problem and attempt a fix.

Such a crisis may yet happen, and the second quarter of 2019 is the ripest moment. Britain is due to lose Mark Carney, the central bank governor for whom there is no obvious replacement, as well as its EU membership and — ministers suspect — Mrs May, too. That is a lot of disruption to withstand for a country that is also due a cyclical downturn. Still, all this can transpire and not qualify as Brexit’s worst legacy. It is the toll paid in decades, not moments, that promises the worst.

As performance director of British Cycling, David Brailsford attributed his success to the “aggregation of marginal gains”. He sweated technical details that were trifling on their own terms because they added up to a meaningful competitive edge over time. Britain should worry about the aggregation of marginal losses. Citizens of a certain age will know the routine. It ends around 2035 as the average Briton, perhaps standing in the infinite non-European queue of a Mediterranean airport, looks around and notices something about the French and German travellers. They are not just collecting their bags already, they are noticeably better off.

Britain has already been in decline for some years due to poor productivity / From Rupert Robson, East Stour, Dorset, UK

Britain must resolve the threat of permanent impairment / From Tom Brown, London, UK

Diagnosing the dangers of the Conservative mission / From Zhao Xiaoou, Aberdeen, Aberdeenshire, UK 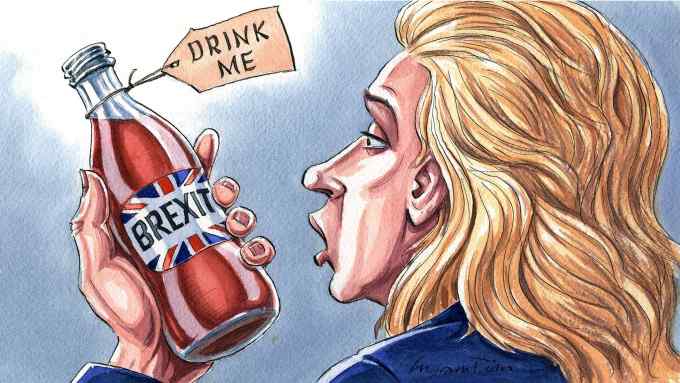 Opinion Focus: The government’s slew of policy papers has failed to answer questions over transition, the repeal bill and financial resolution. Where is the roadmap? Here’s the best of our comment, letters and analysis