Luxury watch industry hopes worst is behind it, at last

Sales growth hints at end to two-year downturn, but bad news has not fully abated yet

Sign up to myFT Daily Digest to be the first to know about Tag Heuer SA news.

After a bleak year for the luxury business, there should be some sparkle at the Baselworld watch fair, which opens today. Signs are emerging of a tentative rebound in sales of finely-crafted timepieces and jewellery, reviving growth at the world’s biggest brands.

Many in the sector would prefer to forget 2016. Swiss watch exports — a closely watched barometer for the luxury goods business — fell almost 10 per cent compared with the previous year, according to the Federation of the Swiss Watch Industry.

Sales were hit by sluggish global economic growth, with the trend in Europe exacerbated by declining numbers of Chinese tourists, fearful of terrorism — although the cheap pound made the UK a bright spot.

Further brightening the mood, Richemont, the company behind brands such as Cartier, Vacheron Constantin and Piaget, has also hinted the worst is over. Last year Richemont cut jobs and even bought back and destroyed watches to reduce inventories.

But the Geneva-based group reported sales in the final three months of 2016 had been 5 per cent higher than a year earlier. Sales in the Asia-Pacific region were up 10 per cent, thanks largely to “strong performances” in mainland China and Korea. Local sales and tourist purchases in the UK were described as “robust”.

Swatch, the group that owns brands such as Omega and Tissot, as well as its eponymous plastic watches, is predicting “healthy growth” in 2017 — although analysts point out the company has a record of excessive optimism. Swatch has refused to cut jobs, arguing the downturn was temporary.

If sustained, the recovery could soon be apparent in Swiss watch export sales (although weak sales figures 12 months earlier will flatter headline numbers).

Still, the recovery is unlikely to be dramatic. Watch exports were down 6.2 per cent in January 2017 year on year, suggesting they have yet to reach the trough. And Bernard Arnault, LVMH’s chairman, warned that last year’s improvement should be seen in “a context of geopolitical and economic instability”. Within luxury sectors, watches will almost certainly lag behind jewellery, analysts believe, and still have problems from the downturn.

One is the steep increases in prices from the years before the downturn — and these have been worsened in euros and pounds by the subsequent strength of the Swiss franc. “Some customers are no longer willing to pay SFr30,000 [$30,000] for something that 10 years ago cost only SFr10,000,” argues René Weber, analyst at Swiss private bank Vontobel. 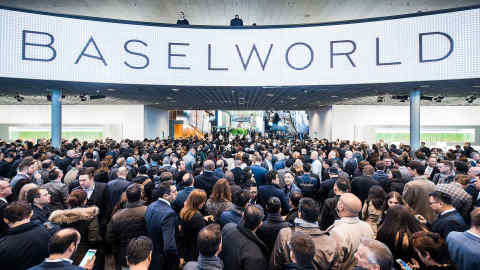 “The new models at Baselworld will be very much at the entry-price level of the brands — and there will be more focus on watches for women, which are nearer the jewellery market, which is doing fine.”

Thomas Chauvet, head of luxury goods equity research at Citigroup, says: “It feels like the industry is only at the beginning of downsizing, but the numbers are less bad and investors want to believe we’re at the bottom.

“There has been too much price inflation without innovation over the past decade. There is a danger of too much complacency — after all it was a technology company, not a Swiss company, that launched smartwatches.”

He continues: “The fact that these companies are not adapting to changes in consumer behaviour and that consumers are spoilt for choice in luxury means that the watch category may have become less relevant.”

For luxury watches especially, the decline was worsened in recent years by the crackdown on corruption and tax evasion in China and by excess inventories in the large Hong Kong market — but also by questions about the long-term appeal of costly Swiss-made mechanical timepieces in an era of frugal consumption.

It feels like the industry is only at the beginning of downsizing, but the numbers are less bad

The price segment for Swiss watches showing the fastest pace of contraction in 2016 was the most valuable sector — top-of-the-range watches costing in excess of SFr3,000.

Helping the recovery are the prospects of a pick-up in global economic confidence, particularly in the US, and a revival in tourism, including in Europe. There is also optimism among executives and analysts that some of the sector’s long-term challenges have abated, such as smartwatches’ threat.

At Baselworld there will be schadenfreude at the woes of “wearable” technology pioneers such as Fitbit and Jawbone. Once hailed as the next big tech market after smartphones — and a significant threat to lower-price Swiss watch manufacturers — the sector has failed to live up to expectations.

Meanwhile, progress has been made in reducing inventories in Hong Kong, which remains the biggest market for Swiss watch manufacturers. To better manage the sales distribution chain, Richemont is rolling out a multi-brand retail concept in Asia, called TimeVallée, which offers partners an “off the peg” model for stores selling a range of luxury lines. A pilot store opened in Nanjing, mainland China, in 2015. Another has followed in Tokyo and three more are expected to open by the end of the year.