Mehul Srivastava in Kapikule and Alex Barker in Brussels

For a glimpse of what British trade into the EU might look like post-Brexit, take a drive to Turkey’s northern border with Bulgaria, one of the busiest land crossings in Europe.

On a recent Saturday at the Kapıkule border crossing, about 30 minutes drive from the Turkish city of Edirne, a line of trucks 4km long stretched along the highway, inching along glacially towards the Bulgarian checkpoints. “Today is a good day,” said Ibrahim Kurtukcu, a 42-year trucker who had been waiting 14 hours. “Last week the line was 7km long.” The record is 17km. It can take up to 30 hours to get through to the other side.

Each driver clutches a sheaf of several dozen documents — an export declaration, a carnet from Turkish customs officers, invoices for the products they are hauling, insurance certificates and, when lucky, a transport permit for each EU nation they will drive through.

They face mounds of paperwork, hours of waiting, a scrabbling for scarce transport permits and random inspections, all before trucks can enter the borderless trading bloc.

It is a bureaucratic load that negotiators say will be a “huge” point of contention in Brexit talks. The right of lorries to move freely is rarely granted by the bloc to its neighbours — and so far only on the condition of accepting the free movement of persons, something Britain is determined to avoid.

Even though Turkey is part of the coveted customs union, which means that these trucks won’t be paying any duties for the goods they haul, the total value of trade lost because of the delays, cost and hassle is estimated to be about €3bn, according to a 2015 study.

Such obstacles are a concern for the UK as it contemplates its divorce from the EU, especially if, as Theresa May, the prime minister, has said, it tries to negotiate some sort of associate membership of the customs union.

In many ways, that relationship would be a rung lower than the arrangement that Turkey has. Turkey’s customs union agreement involved Ankara giving up its right to set its own external tariffs in trade deals — something Mrs May is loath to do.

The biggest speed bump for Turkey is something that the UK could run into as well — transport permits for the 60,000 trucks Turkish operators want to send into the EU each year. For each country through which a Turkish truck needs to pass, the driver must hold a permit from that country’s ministry of transport or an equivalent body.

Those permits are usually limited by quota, and Turkish truckers say there are never enough. This Saturday, the shelf holding Austrian permits was bare — Turkey gets only 18,000 of them a year, and releases them on a bimonthly basis. An official at the border said Austrian permits had run out 18 days into the new year.

So until March 1 truckers aiming for Germany, a key trade destination, must instead drive to Austria’s border with Slovenia, and pay €1,000 to put their trucks on a train that rumbles through the Austrian countryside before depositing the trucks on the German border. Fines for driving through Austria without a transport permit can reach thousands of euros.

Brexit
Your guide to the language of leaving the EU 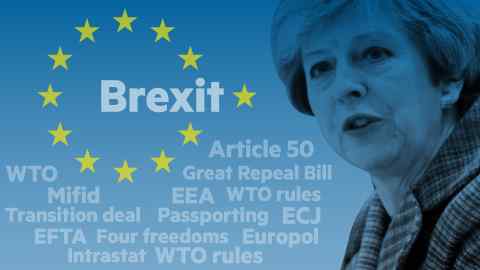 The EU has agreed open-access road transport deals only with a handful of neighbouring countries. This includes members of the European Economic Area, which Britain has said it will not join, and Switzerland, which has a special bilateral agreement.

Crucially, all the transport deals are premised on participation in the EU’s free movement of people area, which Britain also hopes to leave. In other words, even if Britain mirrors the EU rules on haulage, it may not be enough to secure free access for trucks to the EU market.

In a worst-case scenario this means Brexit Britain may be forced, like Turkey, to negotiate lorry quotas with individual EU countries. The flow of British trucks would be set by whatever France, Belgium and the Netherlands allow. British hauliers could face additional checks, discriminatory road tolls, or weight restrictions. The right of cabotage — where a UK lorry can carry goods between France and Spain — would also be lost.

The problem is not one of infrastructure.

Turkey has invested hundreds of millions of dollars trying to speed up things on its end. It built a massive truck terminus an hour from the Bulgarian border, where customs agents carry out inspections and stamp forms that are then fed into a computerised system shared with the EU. The border gates themselves were revamped to create more lanes and parking lots with modern waiting areas.

The goal, said a Turkish official, was to complete as much paperwork as possible before actually reaching the border. On the other end, Bulgarian border officers examine each truck, going over the paperwork and doing random drug and migrant checks. Refrigerated trucks are x-rayed as are 5 per cent of other trucks, at random, according to Mr Ereke. “For the UK, I wish them good luck,” he said, pointing to the lines behind him. “It is not going to be easy.”

Delays at Turkish border are the tip of an iceberg / From Malcolm Levitt, London, UK

HMRC needs time to prepare for Brexit / From Jack Semple