Are our night-time visions a window into the mind or a form of biological housekeeping?

Why do we sleep? And when we sleep, why do we dream? Do our nocturnal visions serve any fundamental biological purpose? Despite the fact that we spend about a third of our lives asleep and perhaps a sixth dreaming, scientists can offer no clear answer to these questions after many decades of global research.

“The short answer is that we don’t know why we sleep,” admits Yuval Nir, who runs a sleep laboratory at Tel Aviv University. “It is not what the public wants to hear but as a scientist I have to say it.” Vladyslav Vyazovskiy, a neuroscientist at Oxford university, agrees: “Surprisingly, the function of sleep remains elusive.”

We do know that without it we would suffer the consequences. “Sleep is undoubtedly an essential life-support system,” says Matthew Walker of the University of California, Berkeley, and author of the bestselling Why We Sleep. All animals with nervous systems sleep. Sleep deprivation causes disease and in extreme cases may be fatal.

Dreaming is more of a mystery, says Nir. “And dreams feed into even bigger questions, such as why we are conscious and why we experience anything at all, which science has not begun to answer.”

Scientists used to associate dreaming solely with REM (rapid eye movement) sleep. It has recently become clear, however, that it also occurs in non-REM sleep — complicating the search for answers. “Dreams in non-REM sleep tend to be more static and often feature a recurring thought, like worrying about failure to study for an exam,” explains Nir. “In REM sleep, they are more active and visual.”

The desire to understand our dreams is as old as dreams themselves. In ancient times, many leaders saw immense significance in their content, using it to guide their decision-making. Religions have sought divine revelations in dreams. Freudian and Jungian psychoanalysts see dreams as an important window into the mind; the symbolic dream images that Carl Jung listed in the early 20th century are still used by practitioners today.

At the other extreme, some researchers see dreaming as a meaningless “epiphenomenon” — an incidental byproduct of the neural information processing that takes place during sleep, particularly during the REM phases. In this view, dreams are no more useful than the waste heat emitted by a lightbulb whose sole purpose is to illuminate.

But most sleep scientists believe that the emotions and narratives conjured up in our dreams do have a function beyond the neural data-­processing that produces them. “There are good sets of evidence to support two functional benefits of dreaming,” says Walker. “One is problem solving and creativity. The other is emotional therapy.”

One type of experiment, pioneered by Harvard University, sets volunteers a difficult problem, such as solving a virtual-reality puzzle, and then lets them sleep before tackling it. Participants who report dreams related to the puzzle achieve better results than those who do not. There is also evidence that dreaming helps people to resolve painful emotional experiences.

Each of us varies in how much of our dreams we remember on waking. But the benefits of dreams do not depend on our remembering them, says Russell Foster, neuroscience professor at Oxford. “I don’t think dreams are important in our conscious decision-making, because we forget so much of them,” he says. If the content of dreams was directly useful in waking life, the theory goes, evolution would have given us better memories for them.

Dreams in non-REM sleep often feature a recurring thought, like worrying about an exam

There are many famous examples of literature, art, music and scientific ideas inspired by dreams, though some may have been embellished. Scholars, for example, have challenged the veracity of the best-known instance from science — the 19th-century chemist August Kekulé coming up with the ring structure of the compound benzene after dreaming of snakes swallowing their tails. Amid all the uncertainty, however, sleep researchers are confident of one thing, Foster says: “There are people who are utterly convinced that dreams can predict the future. But they have no predictive power at all.”

Dreams may remain mysterious, but plausible answers are emerging about some of our multiple biological reasons for sleeping. The ancient origins of sleep lie in the circadian pattern of activity and rest that governs most forms of life on earth. The profound changes in light, temperature and food availability that take place over 24 hours led species to evolve features specialised for optimal performance under either diurnal or nocturnal conditions, but not both.

As animals evolved to move around during the day, feeding and procreating, natural selection simultaneously favoured night-time inactivity to keep them out of the way of predators, pathogens and accidental injury. Conversely, nocturnal creatures developed an urge to rest out of harm’s way in daytime conditions. “Species are adapted to a particular temporal niche just as they are to a physical niche,” Foster says. “Activity at the wrong time often means death.”

Once a circadian cycle had been established, evolution drove further specialisation, so that essential biological housekeeping functions take place during the animal’s downtime, when the brain is not swamped with incoming sensory information and the body is not devoted to energy-intensive activity.

All animals have a powerful drive to sleep, which eventually becomes irresistible. “This can be described mathematically as the interaction between two fundamental processes,” says Vyazovskiy. “One is sleep pressure, which builds up from the time you wake and then reduces as you sleep. The other is the circadian process, which keeps track of time and tells the brain when it should be awake.”

The verified record for staying awake without stimulants is held by Randy Gardner, a Californian high-school student who fended off sleep for just over 11 days in 1964, closely monitored by scientists. Such an experiment would be regarded as unethical today, because of the known risk to health of extreme sleep deprivation.

Two very different housekeeping functions are known to operate in the sleeping brain. The more prosaic — discovered in 2012 at the University of Rochester in the US — is a waste-disposal mechanism that clears the brain of toxic proteins and other cellular rubbish arising from cerebral activity. The glymphatic system, as it is known, pumps cerebrospinal fluid through the brain and flushes waste back into the body’s main circulatory system, which takes it into the liver for eventual disposal.

Brain cells called glia contract by as much as 60 per cent during sleep, leaving more space between them for the cerebrospinal fluid to wash through. Walker invites us to “think of the buildings of a large city physically shrinking at night, allowing municipal cleaning crews easy access to pick up garbage strewn in the streets, followed by a good pressure-jet treatment of every nook and cranny”.

The existence of the glymphatic system may help to explain the observation that inadequate sleep increases the risk of suffering Alzheimer’s disease, Walker says. It gives less time for toxic molecules involved in the disease, such as amyloid and tau proteins, to be cleared from the brain.

Another key operation that takes place during sleep is information-processing and memory consolidation — neural activity whose details remain elusive despite many years of scientific study. The two broad categories of sleep that roll through the brain in slow waves during the night, REM and non-REM, both play a role in a complex data-processing dance.

A good example of the theories being put forward to make sense of the emerging evidence was published this month by Penny Lewis, a psychology professor at Cardiff University, with international colleagues in the journal Trends in Cognitive Sciences. Their model proposes that the brain organises information into a useful framework during non-REM sleep, while REM helps us to see beyond that framework and make unexpected connections between memories.

In non-REM sleep, memories captured by the brain’s hippocampus are replayed there and in the cortex. As we detect similarities between them, the information is laid down in the cortex within a framework based on thematic links. During REM, the cortex is no longer synchronised with the hippocampus and is free to replay the stored information in different combinations. This is facilitated by special brain waves that appear to activate areas of the cortex almost randomly.

Think of the buildings of a large city shrinking at night, allowing cleaning crews easy access to pick up garbage strewn in the streets

To illustrate the idea, Lewis gives an example similar to Kekulé’s benzene dream. In 1911, the physicist Ernest Rutherford proposed a structure for atoms, with tiny electrons in orbit around a relatively large nucleus, which was based on planets orbiting the sun. According to Lewis’s theory, Rutherford might have replayed his recent thinking about atoms during REM sleep along with a randomly activated memory of the solar system, enabling him to make a mental connection between them. Unlike Kekulé, he need not have remembered a dream to make the connection.

But Lewis admits: “We have been very careful not to talk about dreaming in our paper. Indeed, I tend to stay away from dreaming, because it is hard to do scientific work on it.” Unfortunately for those eager to unlock the mysteries of their dreams, many neuroscientists and psychologists today agree.

Explore the series
READ MOREMarina Benjamin
Confessions of an insomniac 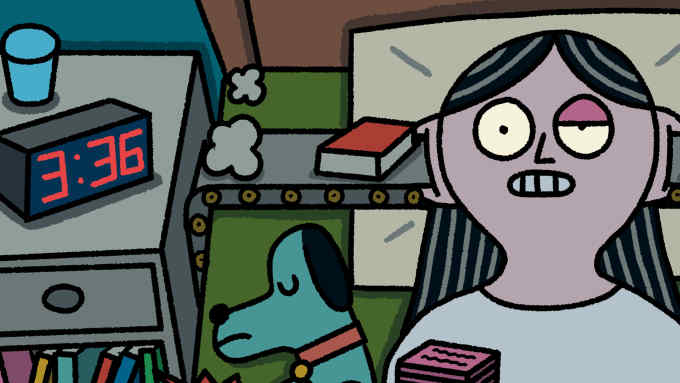