For under 200 pesos ($10), visitors to the picturesque Mexican town of Tequila can purchase a fitting souvenir from the hawker stalls lining the roads: a three-litre wooden barrel labelled as tequila. Yet the drink inside is not Mexico’s national spirit, but an illicit concoction of distilled sugar cane and hangover-inducing additives.

Many aspects of the tequila trade are regulated to avoid such concoctions and raise tax, but the scene is complicated and pits large and small producers against each other. The government’s latest proposed alcohol regulation — NOM 199 — is controversial because it defines all alcoholic drinks sold legally in Mexico and threatens to overturn centuries of tradition.

Tequila is already protected by its DO (denomination of origin) status, which dictates that it must contain at least 51 per cent Blue Weber agave and be distilled in the western state of Jalisco or parts of four other states.

The new rules take aim at the “agave distillates” industry led by the brand Rancho Escondido. This spirit — 28 per cent alcohol by volume — combines low quantities of agave with cane liquor, and retails for as little as 70 pesos a litre. In 2014, agave distillates were tequila’s closest domestic rival for volume sales.

Advocates of the rules say they are a step towards protecting consumers and reducing counterfeit drinks. “We are trying to regulate the so-called agave distillates,” says Hipócrates Nolasco, president of the Mezcal Regulatory Council. “They represent unfair competition because people confuse them with tequila and mezcal.”

NOM 199 would require brands like Rancho Escondido to label their products “aguardiente de agave” (agave firewater). They would also have to raise their alcohol content to between 32 per cent and 55 per cent, a stipulation that will require more agave and greater costs.

Critics say the new rules may also threaten artisanal distillers of mezcal, the earthy agave spirit that has become Mexico’s trendiest drink. The mezcal DO introduced in 1994 prepared the ground for the current boom in exports. Yet the regulations restricting production to nine states in Mexico marginalised many traditional makers; the smoky spirit is distilled in the majority of Mexican states and the word itself does not connote a region. “Mezcal is not a place, it is a generic name for an agave-based drink,” says Pedro Jiménez Gurría, the founder of Mezonte, a civil association that promotes sustainable mezcal production.

“Mezcal is a Mexican gastronomy, and Mexican gastronomy is complex,” says Daniel Abdelmassih Jiménez, a geographer who has developed a map charting the differences between Mexico’s mezcal-producing regions. “We have thousands of mezcals, but when they segregate areas of production we lose aromas and flavours.” Mr Abdelmassih Jiménez believes that NOM 199 was designed to eliminate competition, rather than protect consumers. “When you say aguardiente, people think of poor-quality, sugarcane liquor,” he says. “It is a pejorative term.” 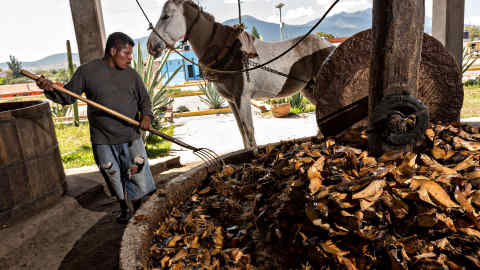 Another problem is that the regulations make little allowance for mezcal’s complexities. While tequila is limited to Blue Weber agave, mezcal is made from more than 40 species and production techniques vary massively across regions. Ana Valenzuela, a biologist who specialises in agave research, believes that each state should define its own variety of mezcal. “Certification should be managed locally,” Ms Valenzuela says. “There should be norms for each state.”

Jalisco-based artisanal distiller Miguel Angel Partida lives outside of the DO and, under the new rules, is excluded from using the name mezcal, despite his family distilling it for generations. Mr Partida’s drink is currently sold as “agave distillate”, but everyone in the local area still calls it mezcal. Mr Partida believes the name “aguardiente de agave” will further hit sales. “The name of the drink is mezcal. Changing to another name threatens our identity and culture.”

Some mezcal producers are reluctant to go legal as many small distillers cannot afford to pay several thousand dollars to become certified. “One of the structural problems in Mexico is that complex regulations make it difficult for companies,” says Alfredo Coutiño, director for Latin America at Moody’s Analytics.

The name of the drink is mezcal. Changing to another name threatens our identity and culture

Legal spirits are also subject to steep taxes. Currently, the Special Tax on Production and Services enacts a 53 per cent levy on high-proof alcohol in Mexico, including mezcal. “When you put up these kinds of obstacles, you create a black market,” says David Suro Piñera, the president of the Tequila Interchange Project, a consumer advocacy group based in Philadelphia, Pennsylvania.

Combating the sale of spirits by street hawkers is a valid aim for several reasons, some say. Ramón González Figueroa, the director of the Tequila Regulatory Council, warns that Mexico’s vast counterfeit drinks industry poses a health risk to consumers. Such products also “generate a big problem for the formal economy because they do not contribute tax”, he says. The market research firm Euromonitor International estimates that 43 per cent of distilled drinks sold in Mexico are illicit — costing the government 6.4bn pesos in unpaid taxes. Yet this counterfeit alcohol trade is only a branch of the vast informal economy, which generates 58 per cent of jobs and 24 per cent of GDP, according to Mexico’s National Statistics Institute.

Multinationals are looking for other changes to regulation too. Diageo, the British alcohol conglomerate behind Don Julio, a high-end tequila brand, says that Mexico’s current practice of calculating tax on the basis of value instead of volume penalises premium brands. Mr Piñera argues that an advantage of having companies like Diageo involved is they can may be able to exert a powerful influence on the Mexican government. But, he says, “any changes to the fiscal regime should be for small, domestic producers first.”